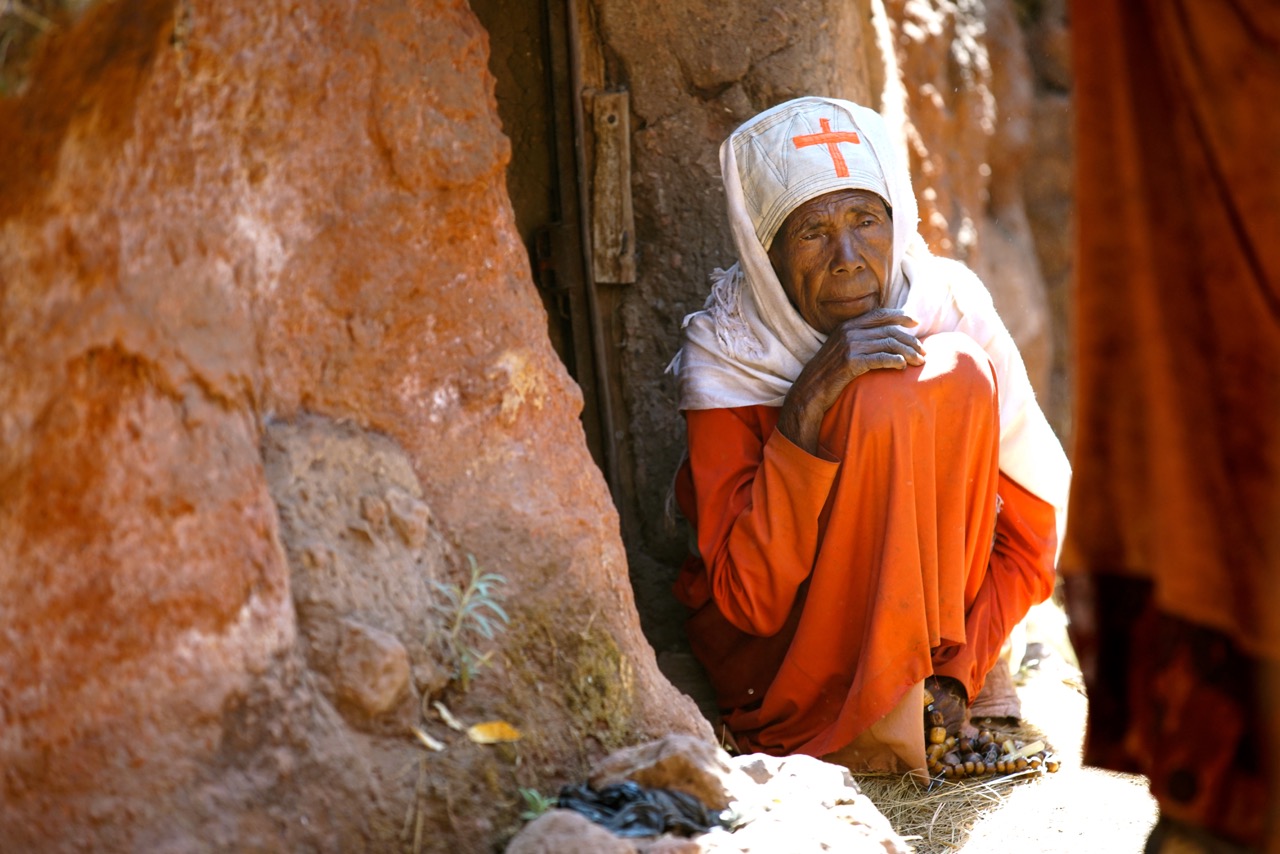 While the last two blog posts were based on my adventures journey to some of the hidden tribes of Ethiopia, this last blog post will be divided into a historical sightseeing tour of Ethiopia, Gondar & Lalibela and a (maybe) more relaxed, less challenging but definitely superb wilderness area, the Simien Mountains. 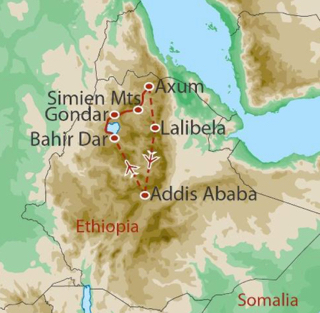 The picture shows you the second part of my journey, carried out with Ethiopian Airlines and a private driver. The first stop was at Bahir Dar (1830m) and on arrival, I took a boat trip to Lake Tana – Ethiopia’s largest lake, covering 3673 square km and the source of the famous Blue Nile River. Many of the small islands scattered across this lake shelter monastic churches, some founded as early as the 14th Century. The walls of several of these churches are ornately decorated with stunning mural paintings. but there is more to see like the monastery of Ura Kidane Mehret on the Zeghie peninsula and Blue Nile Falls, known locally as Tissisat (“Water That Smokes”).

From kings and churches to emperors and castles: another not-to-be-missed stop on Ethiopia’s Historic Route is what has been called the ‘Camelot’ of Africa: Gondar, the first capital city of the Ethiopian empire, which began in 1632 with the reign of Fasilidas. In Gondar, there are a dozen castles built by various emperors over the course of 236 years. The city seems more European than African and also has Islamic influences. Today, I visited the residences and baths of Fasilidas, the church of Debre Berhan Selassie (Light of the Trinity), which is located at the summit of a hill and surrounded by interior is decorated with beautiful frescos. Following, the Gondor Castle. 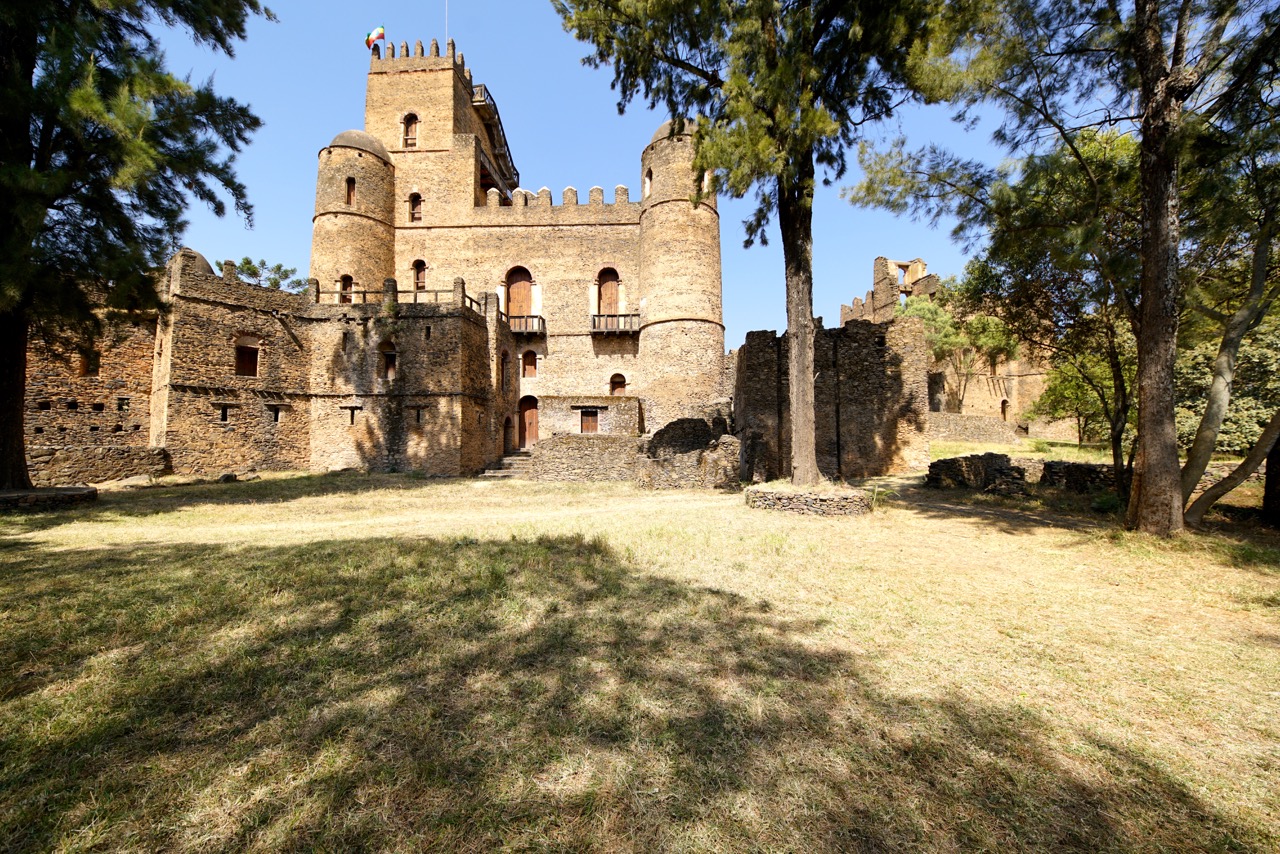 Gondar is a Royal and an ancient historical city of Ethiopia. Its the home of many Emperors & Princess who lead the country from the 12th century to the last decade of the 20th century. To mention just a few Emperor Fasiledes, Empress Mentwab, Iyasu I, Tewodros II, Empress Taitu. It is the home of the highest mountain in Ethiopia, Ras Dashen, and the Simien Mountains National Park. Gondar Castle, dubbed the Ethiopian Camelot, is not a single castle, but instead is the name given to the entire complex of castles and palaces in the area. The oldest, most impressive of Gondar’s imperial structures is the two-storeyed palace of Emperor Fasilidas, built of roughly hewn brown basalt stones held together with mortar.

Around 2km northwest of the piazza lies Fasiladas’ Bath, which has been attributed to both Fasiladas and Iyasu I. The large rectangular pool is overlooked by a charming building, thought by some to be a vacation home. It’s a beautiful and peaceful spot. Although the complex was used for swimming, it was likely to have been constructed for religious celebrations, the likes of which still go on today. Once a year, it’s filled with water for the Timkat celebration. After the water is blessed by the bishop, the pool becomes a riot of splashing water, shouts and laughter as a crowd of hundreds jumps in. The ceremony replicates Christ’s baptism in the Jordan River and is seen as an important renewal of faith. 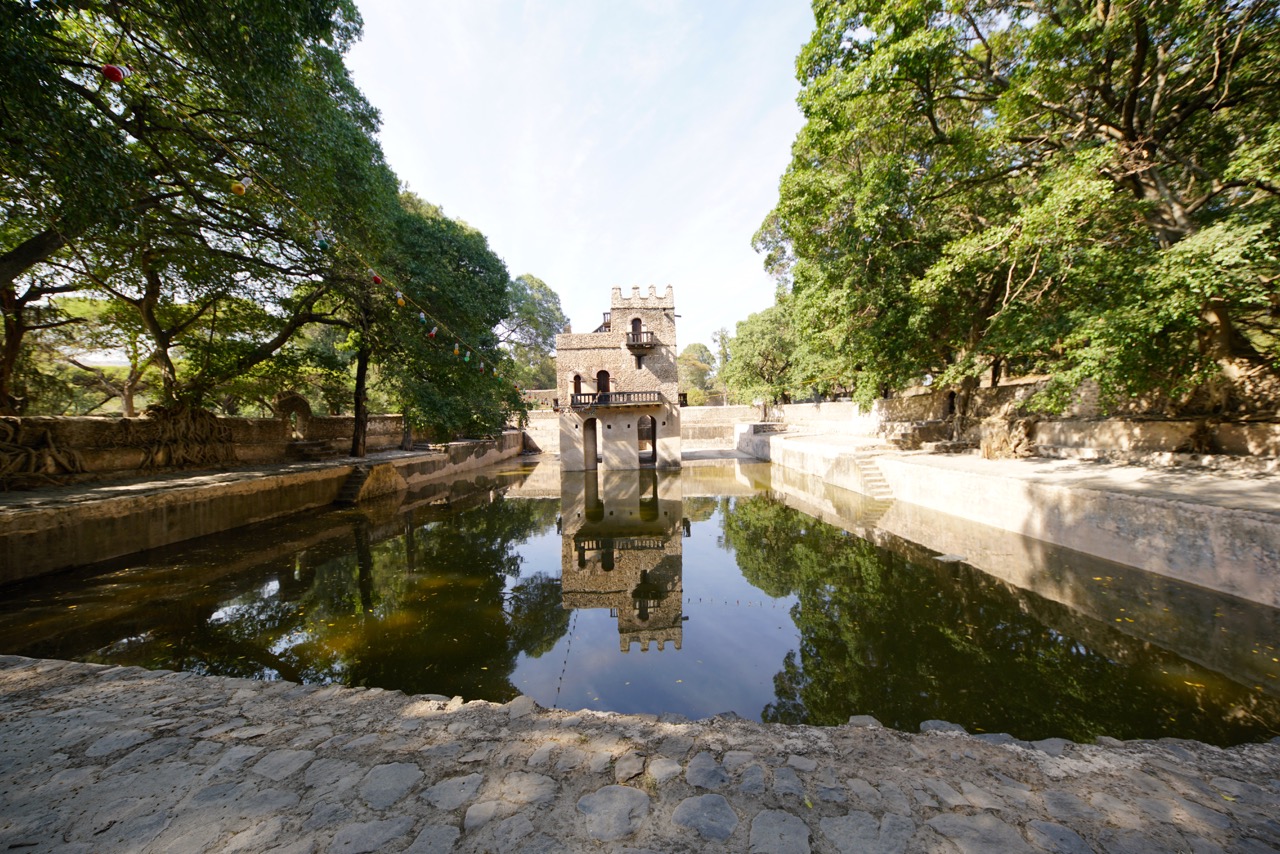 Besides the Gondar Castle, there are numerous historical sites, such as the Debre Birhan Selassie Church. From the outside, it is rather plain, but its interior has made it one of Ethiopia’s top tourist attractions. The walls depict biblical scenes and saints and the ceiling is covered with the faces of hundreds of angels. Icons of the Holy Trinity (three identical men with halos) and the Crucifixion have pride of place above the entrance to the Holy of Holies. 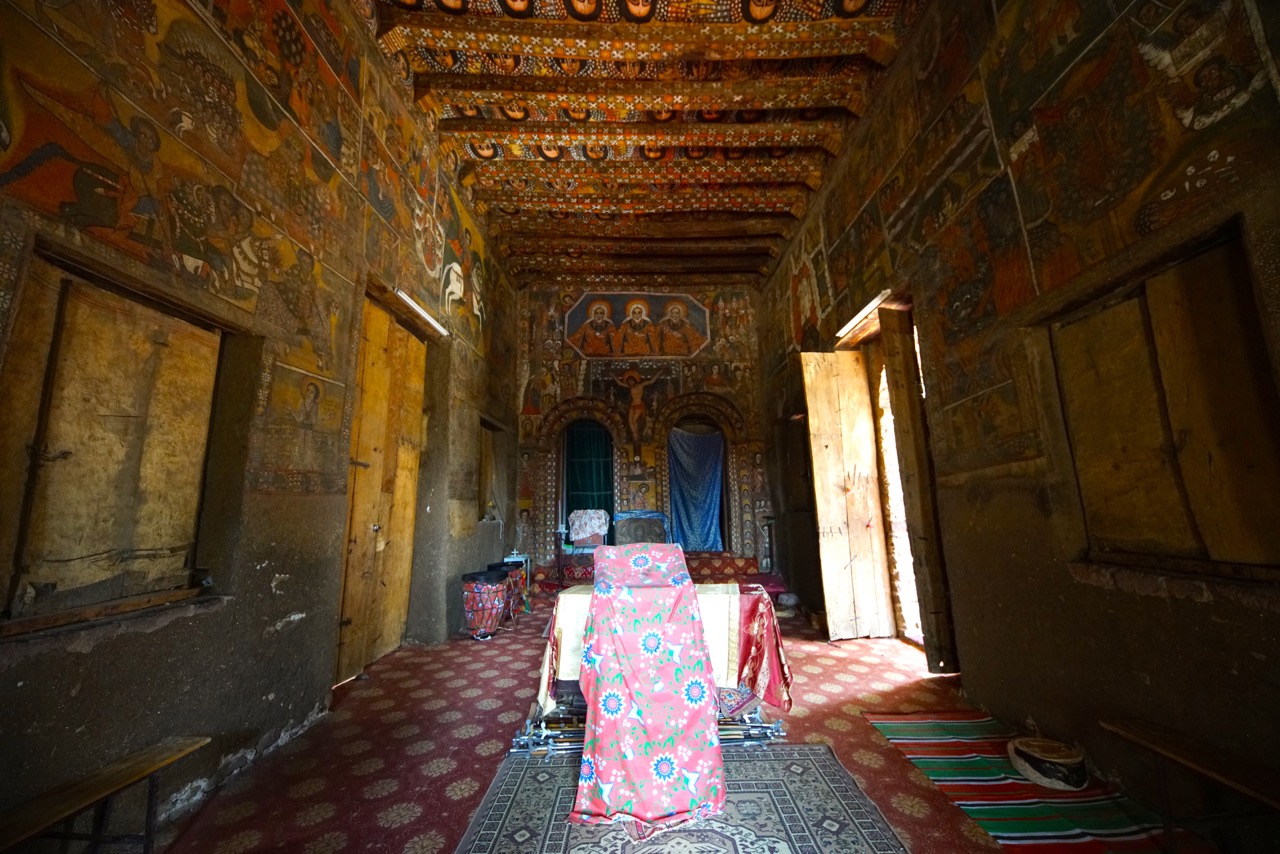 Since I am outdoor rooted you can imagine that, after spending two days of historical sightseeing, I got, itchy-feet’! It was about time to get out there again and so I went next morning to Simien Mountains. In Amharic, ‘simien’ means ‘north’.  Six hundred million years ago, the mountains were an enormous volcanic mass; rain and ice have carved deep fissures into them and rivers have continued the work of erosion, creating one of the most significant sculptures on the planet:  peaks, canyons, gorges, clefts and pointed amethyst-colored pinnacles like obelisks. The Simien Mountains of Ethiopia offer superb wilderness trekking with stunning scenery, enormous cliffs and escarpments and the chance to spot unique wildlife such as the Walia Ibex and Gelada Baboon. Welcome to the spectacular Simien Mountains. 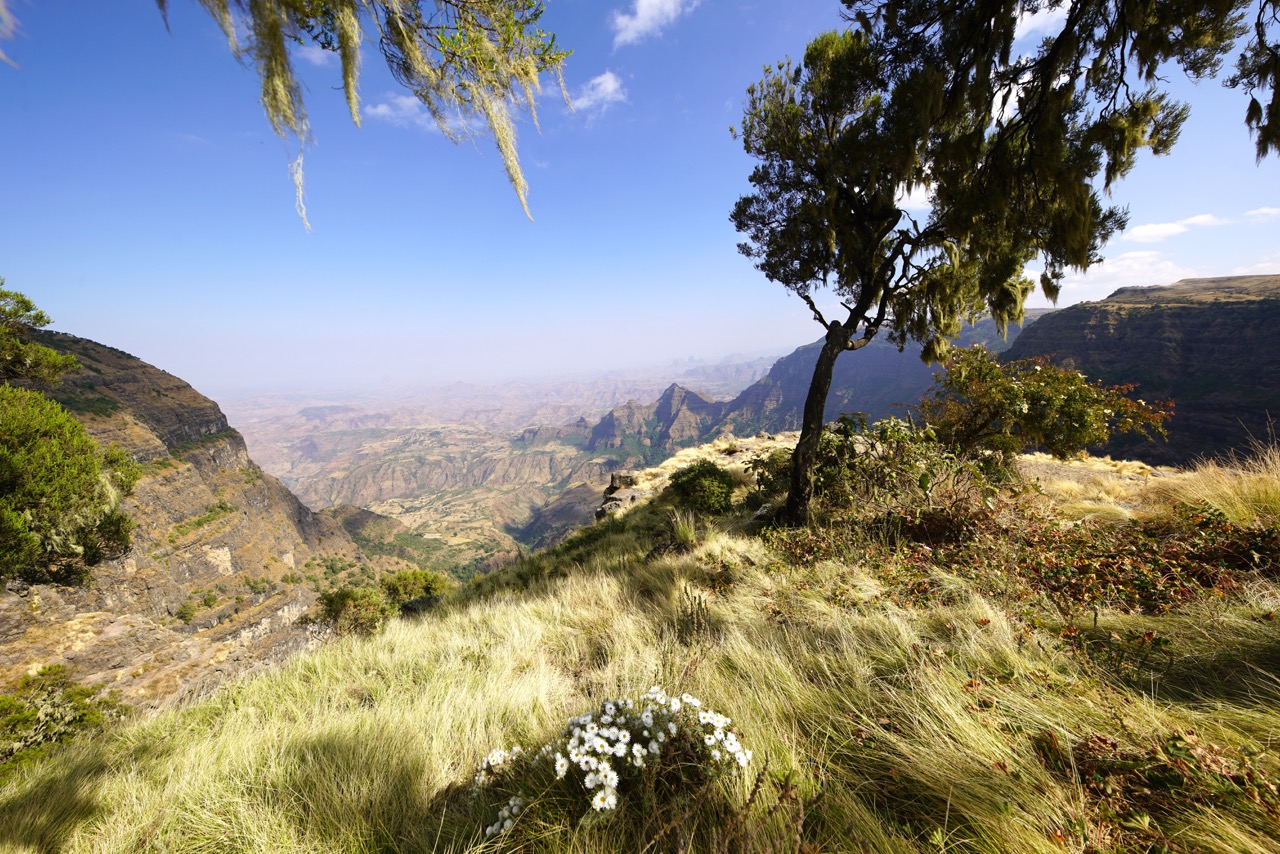 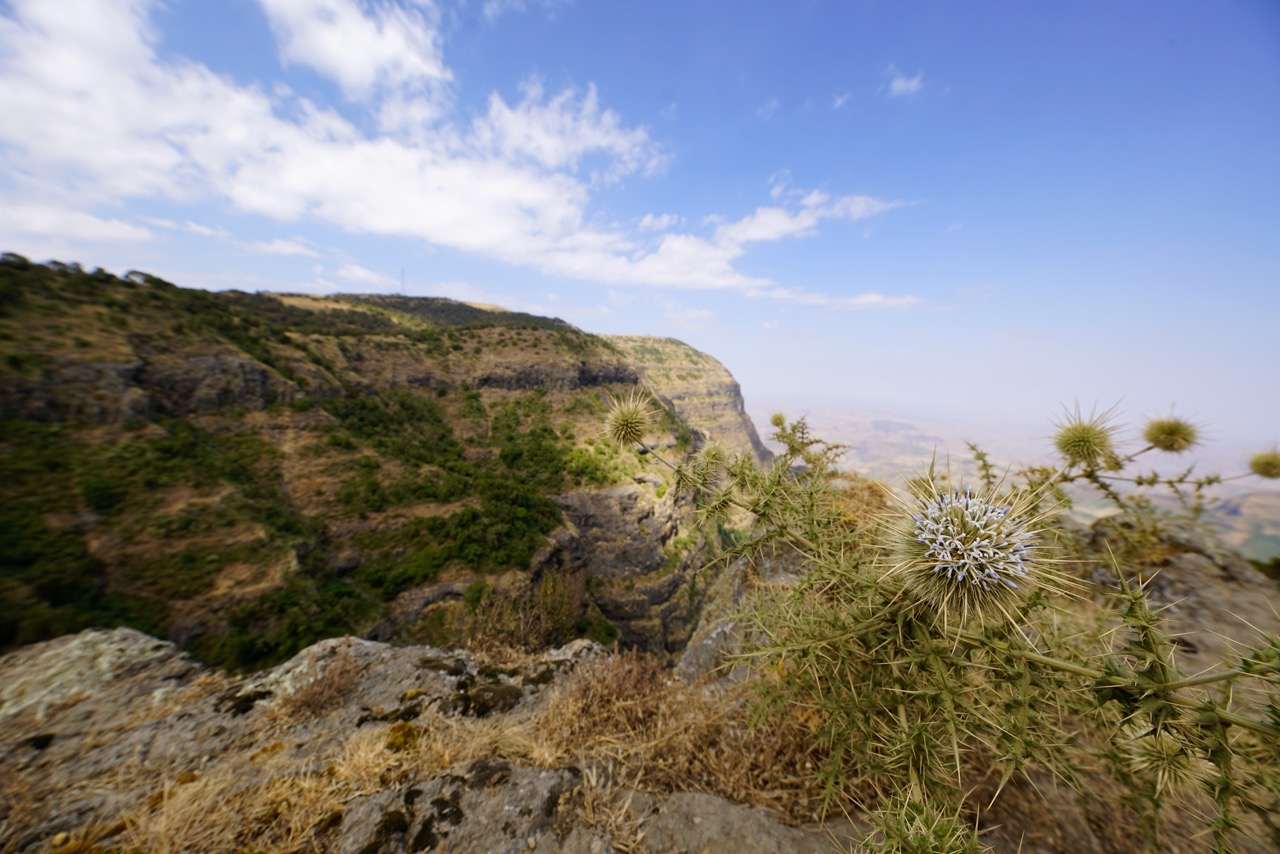 The main attraction of the Simien Mountains National Park is its biosphere: the steep cliffs and the cool climate at the altitude of the Erica tree line (3600 to 4000 m) have created conditions that are appropriate for the survival of an ibex species (Capra ibex wee) endemic to the Simien Mountains. Gentle highland ridges at altitudes above 3600 meters above sea level, covered with grasses, isolated trees, and the bizarre giant Lobelia are found on the high plateau that ends abruptly at 1000- to 2000-m deep escarpments. There are short and multi-day hikes possible, the scenery is just breathtaking and the wildlife encounters are guaranteed! I just loved watching the endemic Gelada Baboons. The gelada sometimes called the bleeding-heart monkey or the gelada baboon is a species of Old World monkey found only in the Ethiopian Highlands.

Geladas live in a complex multilevel society and they are the only primates that are primarily graminivores (grass eaters), grass blades make up to 90% of their diet. Reproduction and parenting is a big thing in the life of baboons and a female will copulate up to five times per day! When in estrus, the female points her posterior towards a male and raises it, moving her tail to one side. The male then approaches the female and inspects her chest and genital areas. 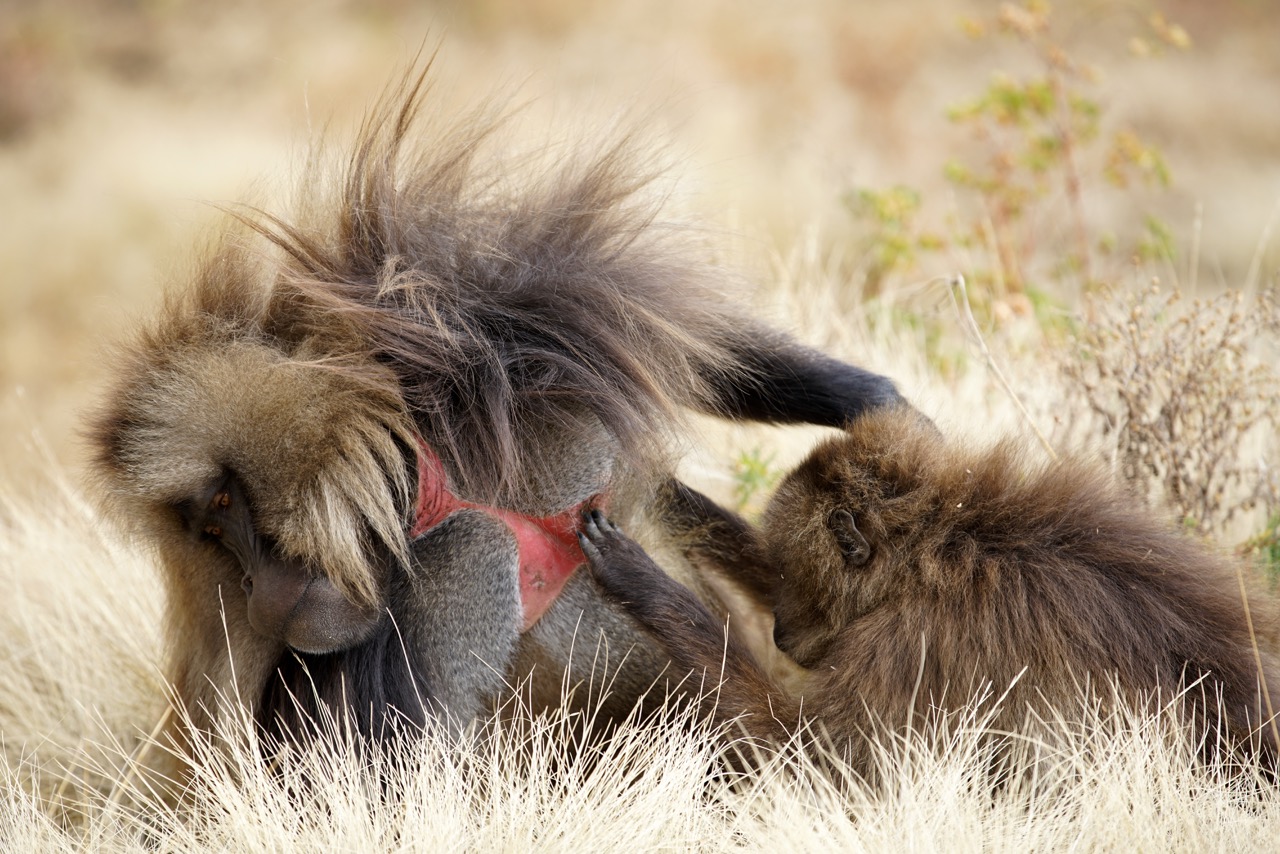 After days of hiking, laying in the grass, enjoying the wildlife sightings and the cool air of Ethiopia’s highlands I was ready for the last view days of my journey, ready for Lalibela. 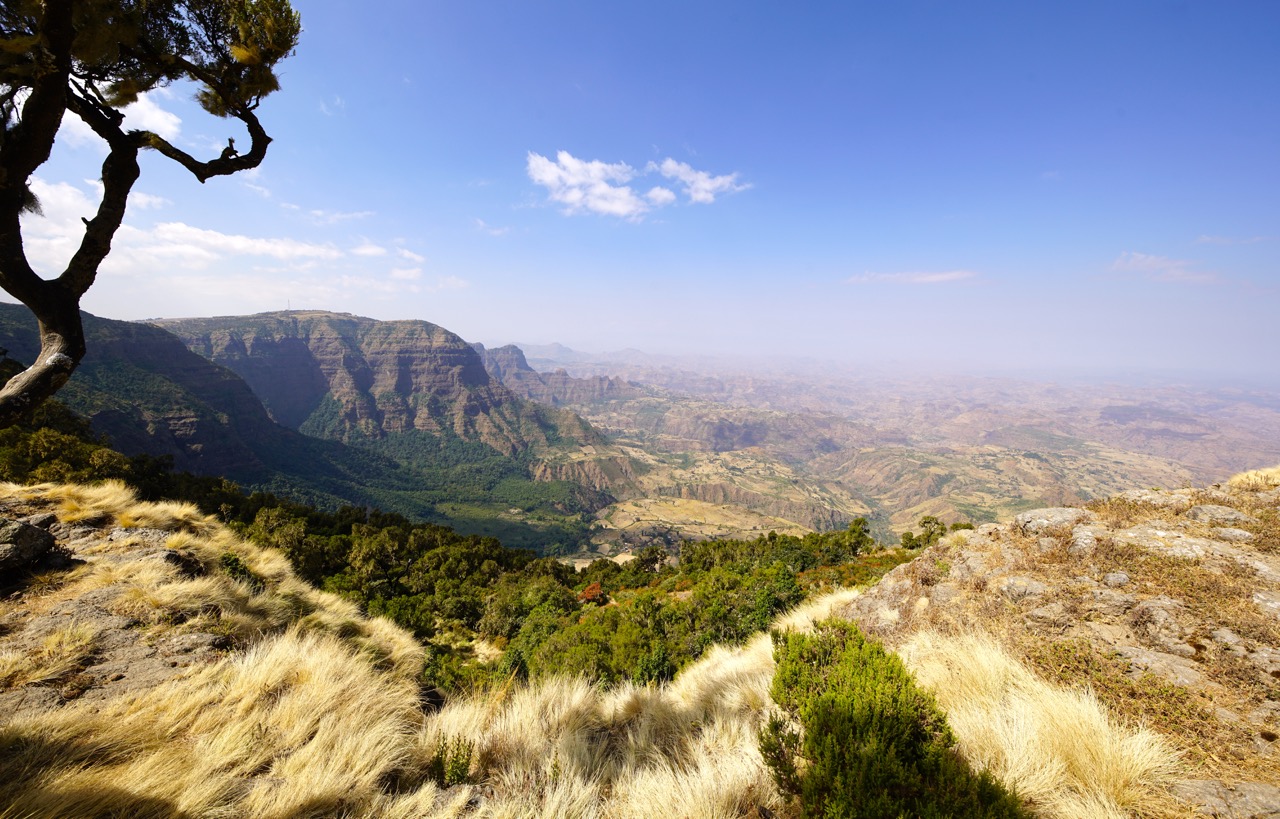 LALIBELA: (ላሊበላ) is history and mystery frozen in stone, its soul alive with the rites and awe of Christianity at its most ancient and unbending. No matter what you’ve heard about Lalibela, no matter how many pictures you’ve seen of its breathtaking rock-hewn churches, nothing can prepare you for the reality of seeing it for yourself. It’s not only a World Heritage site but truly a world wonder. The 11 Ethiopian Orthodox churches here have to be seen – and walked through – to be believed (I managed four). They were built in the 13th century on the orders of King Lalibela, not from the ground up but chiseled out of the town’s red volcanic rock hills. Legend has it that the toil of thousands of laborers on this, new Jerusalem‘ during the day was continued by angels at night. Lalibela – described by Hilary Bradt, the travel guide author, as “the number one sight in Ethiopia and perhaps the most astonishing man-made site in sub-Saharan Africa” – is crucial to drive-by officials to banish images of famine and conflict, and turn the east African country into a fashionable destination. A “tourism master plan” is being finalized to boost visitor numbers, which are already growing by 10% a year. 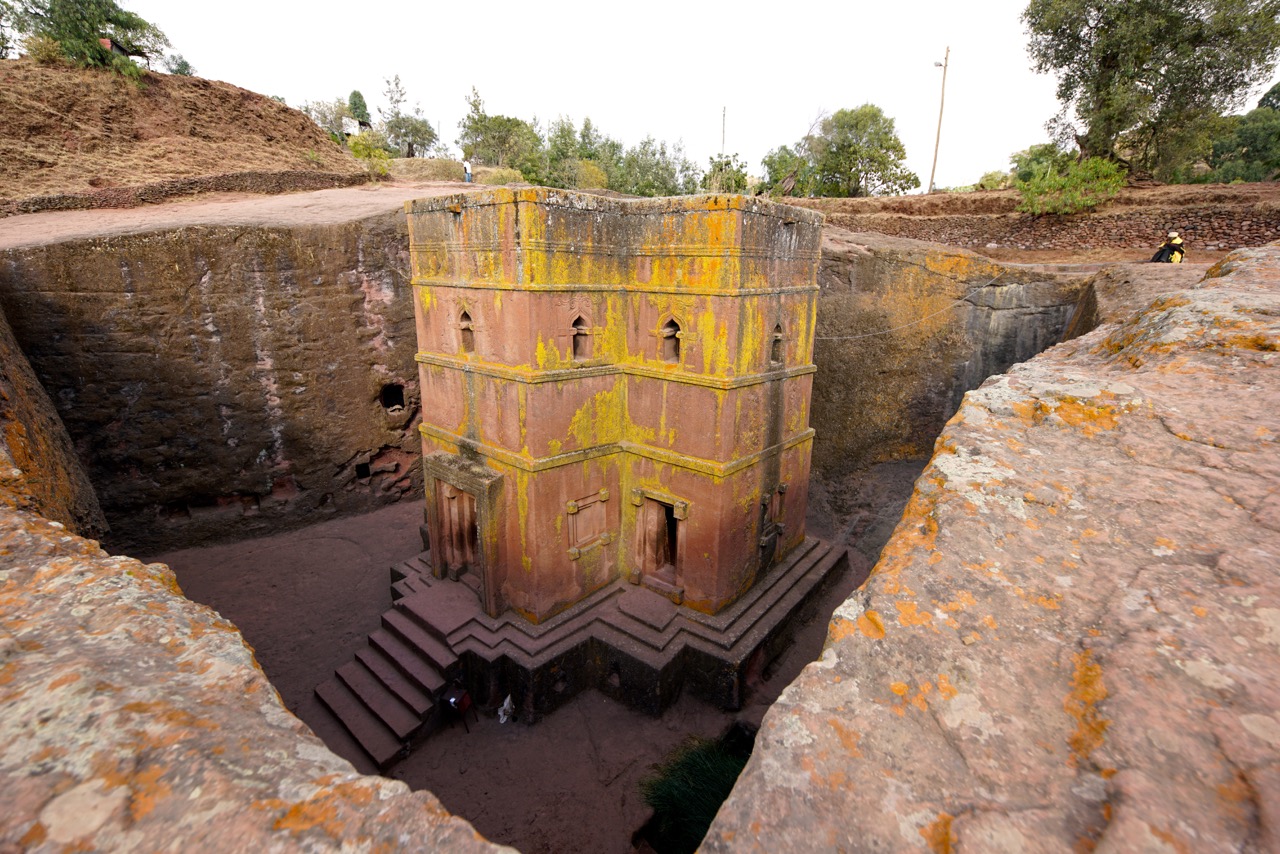 Lalibela is located in the Amhara Region, at roughly 2,500 meters above sea level. The Rock-Hewn Churches were declared a UNESCO World Heritage Site in 1978. Though the dating of the churches is not well established, most are thought to have been built during the reign of Lalibela, namely during the 12th and 13th centuries. The dimensions are hard to grasp so here are some aerial pics to give you a different perspective. 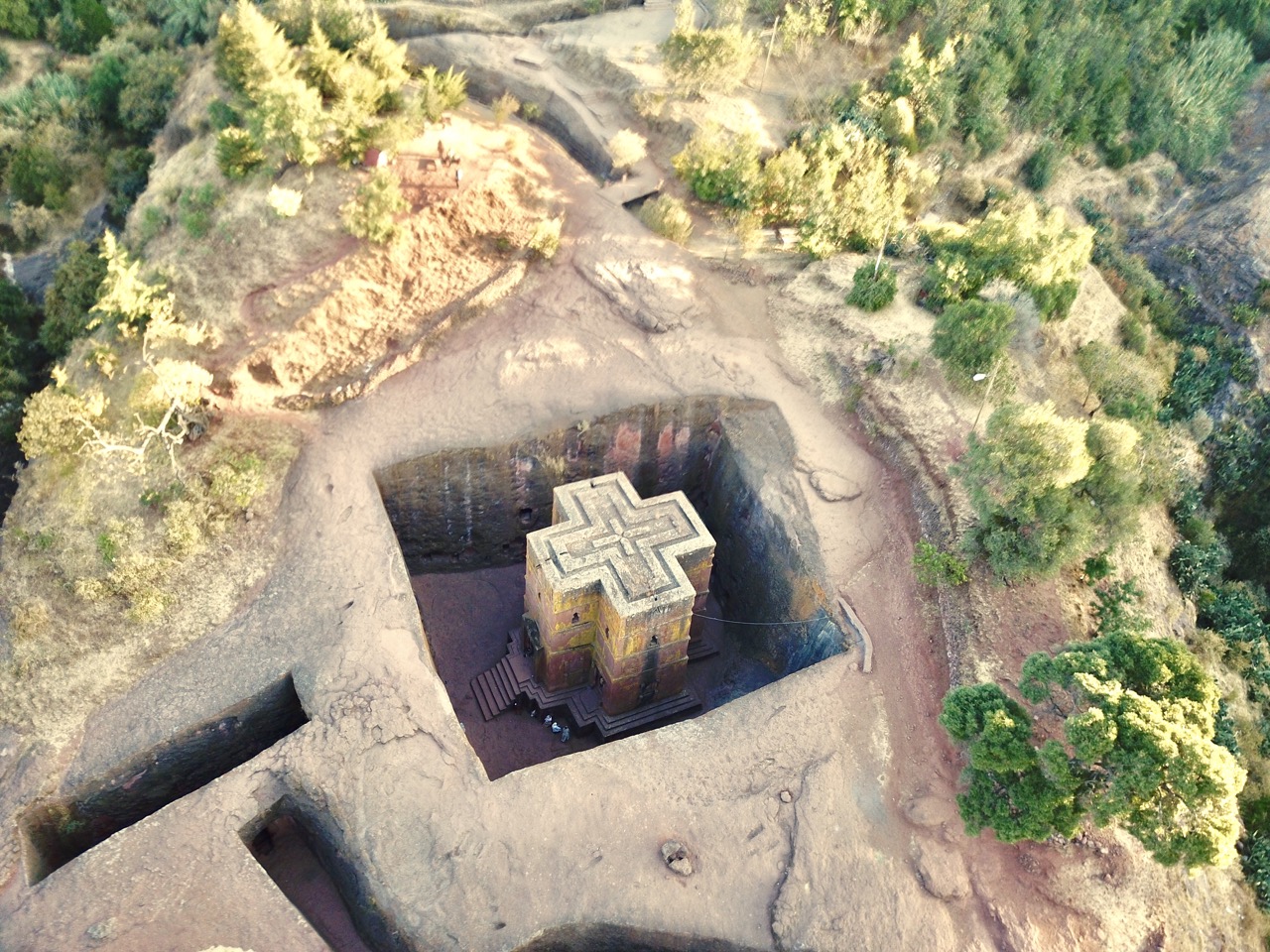 Lalibela is home to priests, monks, and worshipers, and serving as a religious sanctuary for pilgrims who come from all over the world. After the mesmerizing first day, I started to wonder a bit around Lalibela which got me away from the crowd and brought me closer to the surrounding landscape and people. The people, colors, architecture and the dimensions of those churches impress me till today so let me share some of those visual memories with you. 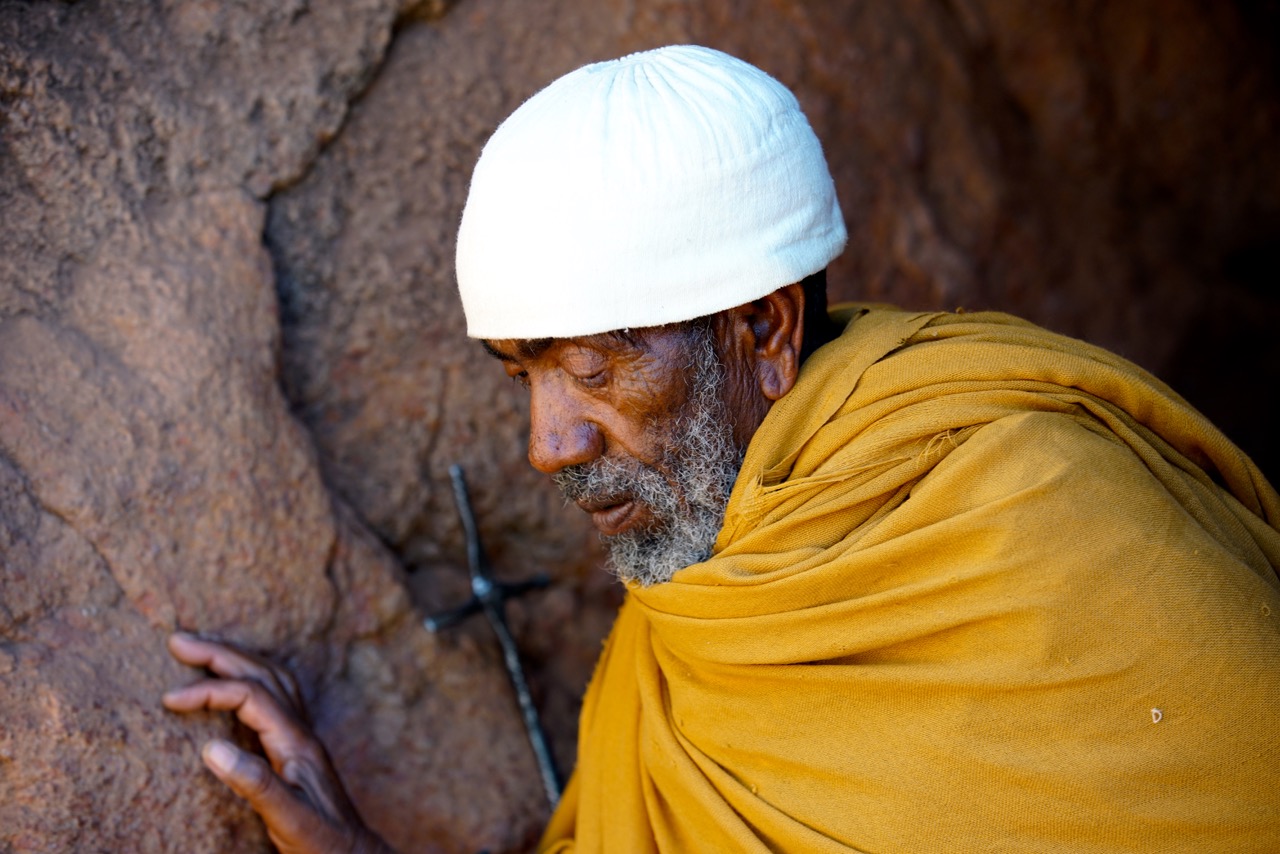 This rural town is known around the world for its churches carved from within the earth from “living rock,” which play an important part in the history of rock-cut architecture. The following link will provide you with an overview of the Chores of Lalibela 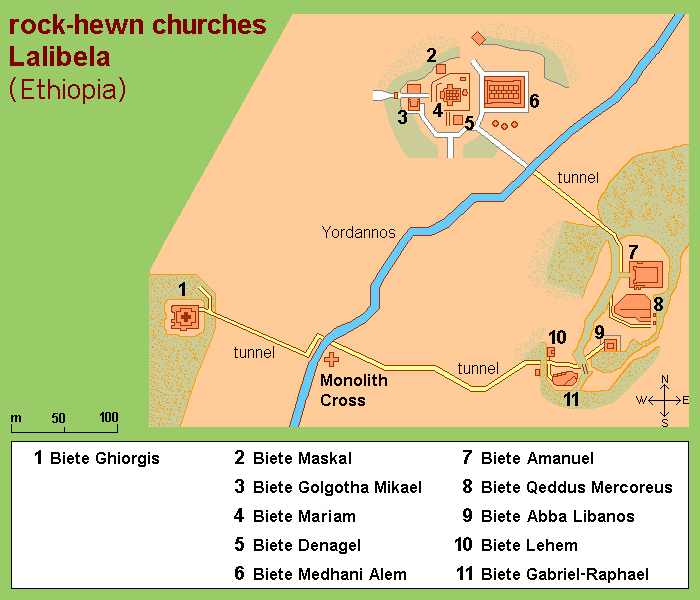 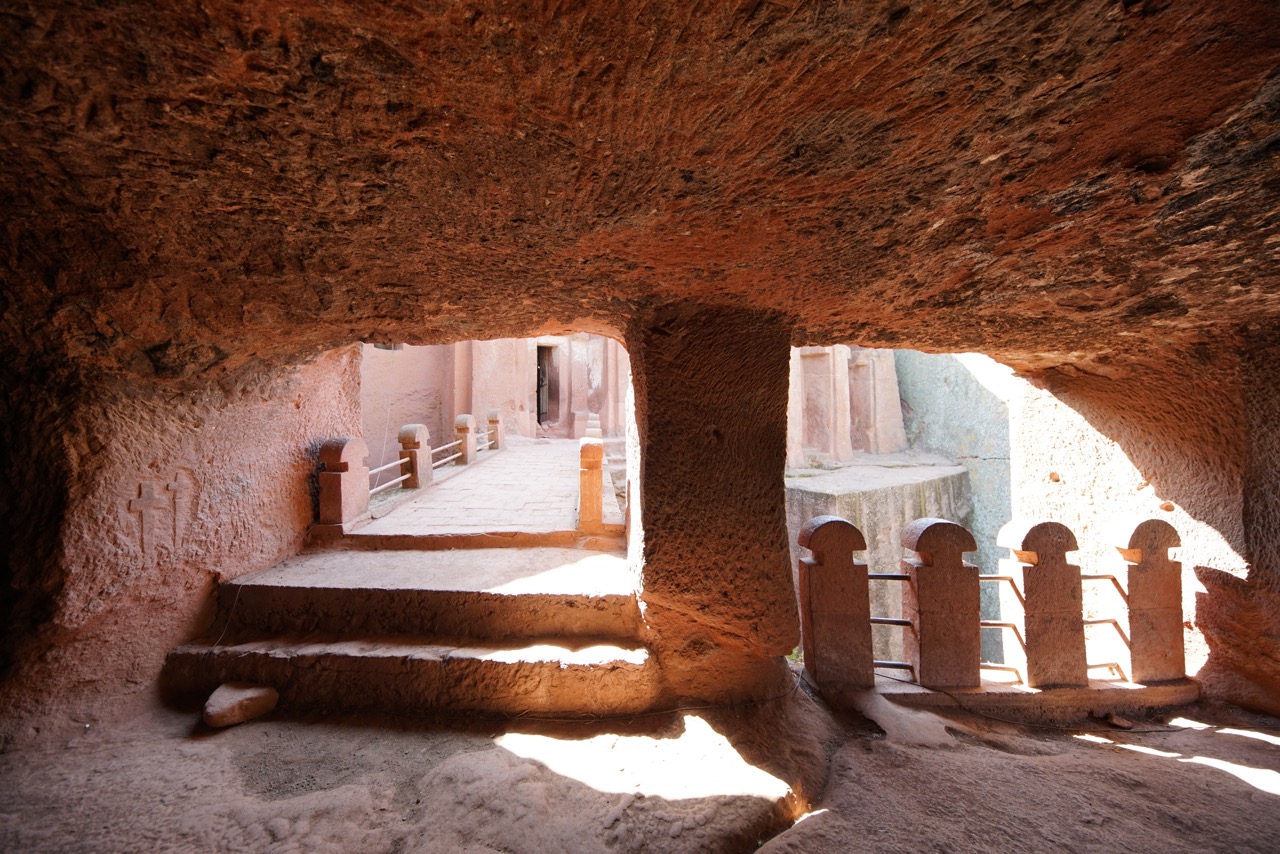 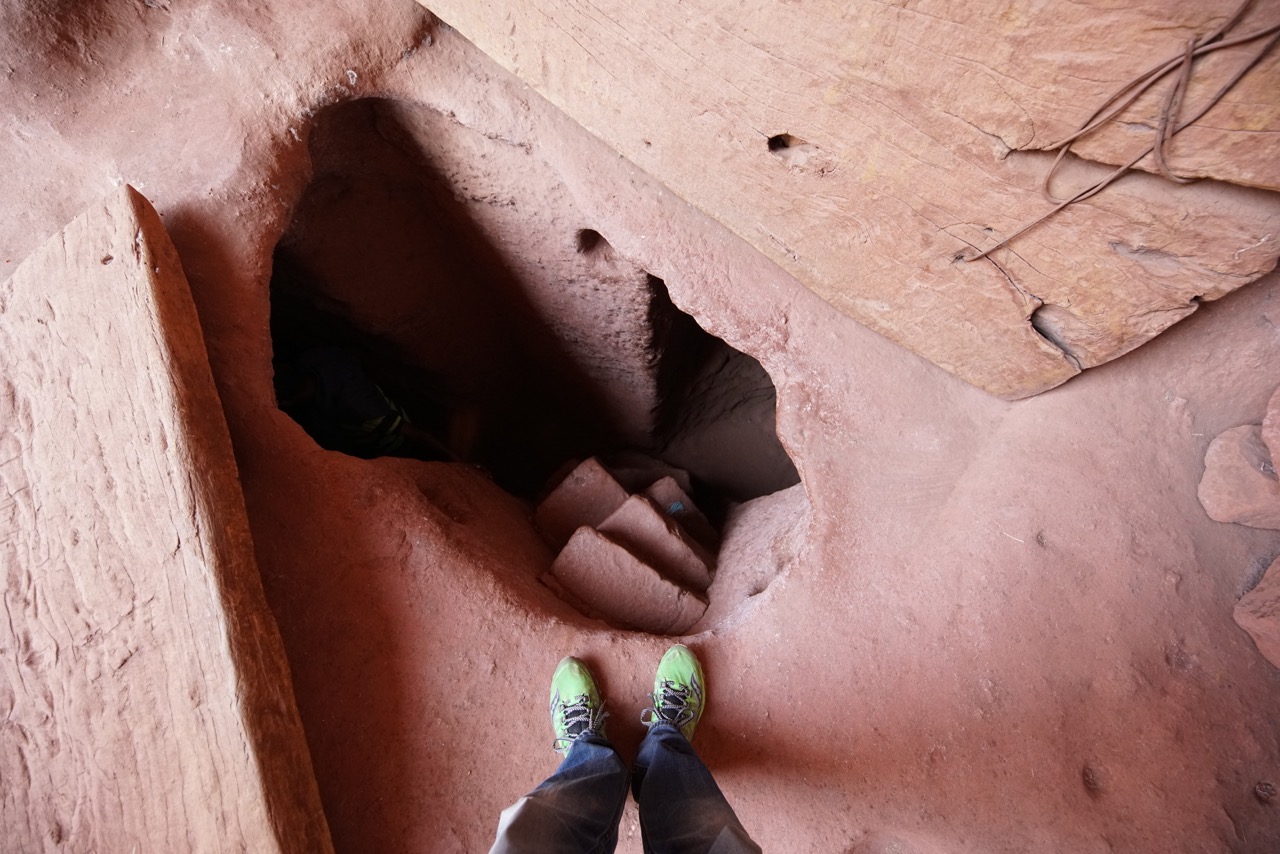 So let’s discover a bit more and here are my last impressions of Lalibela’s fascinating churches before my last stop at the Monastery of Na’akuto La, from where I will return back to Addis Ababa and then back to Austria. I did spend three weeks in Ethiopia and by looking back it shows me again on how little I know about this wonderful world but on the other hand, it highly motivates me to see, understand and learn more about this amazing planet.

Monastery of Na’akuto La: The location is absolutely fascinating – wide view of the Valley and the surrounding mountain ranges. The monastery is not far away from Lalibela and steps lead down to the monastery which is built under a rock overhang. This place is peacefully settled on an amazing hill, there is a real spiritual atmosphere as well as a beautiful waterfall, the view, nature and village life around. 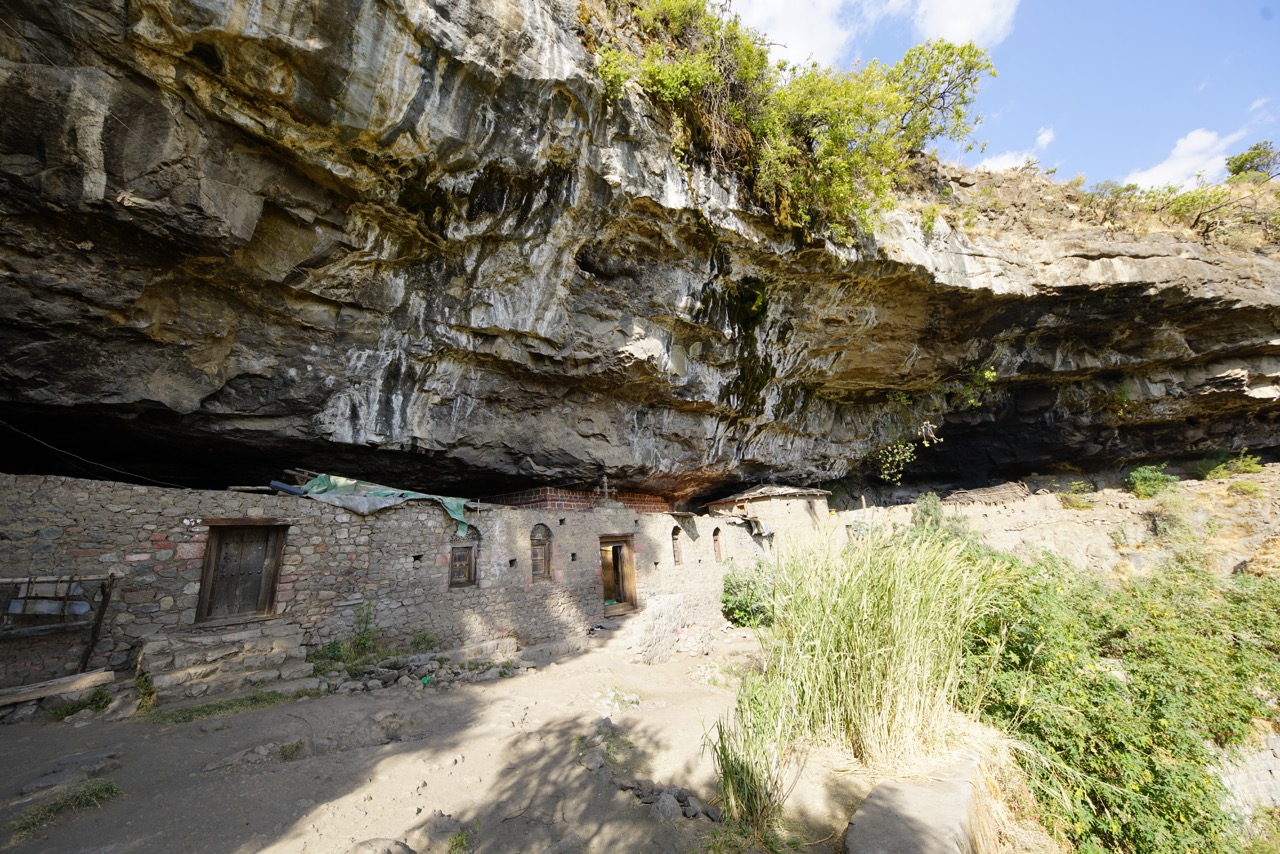 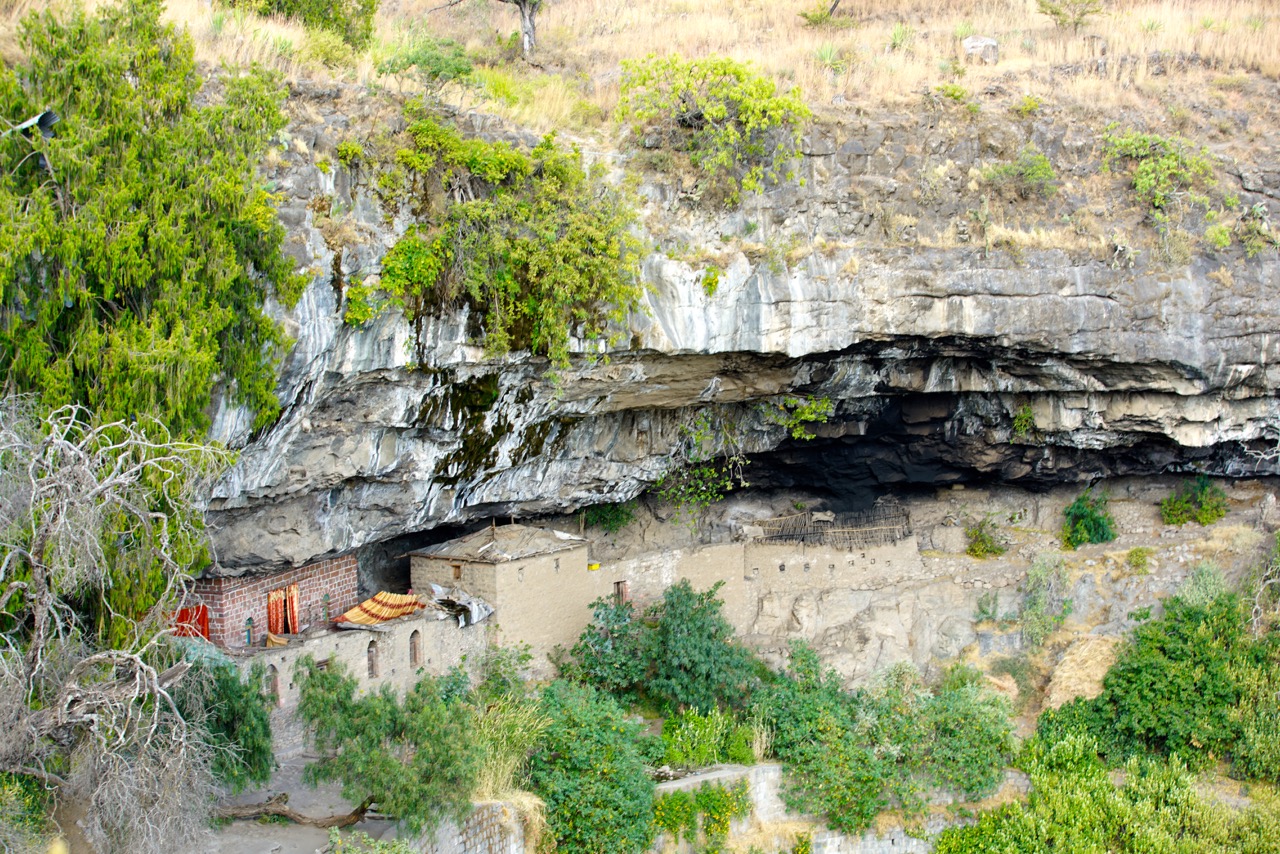 Traveling in Ethiopia was, without a doubt, exhausting. But by trying to stay away from some of the main paths, that should not be surprising. After my online research, I was able to hire to individual drivers for the different locations and interests. I negotiated the price upon arrival and paid them cash at the end of every day. The cost of the car rental, the driver, gasoline, and his accommodation was agreed on $ 160 per day, independent from the distances of driving. Myself, I slept many times in (or outside) the car as well as at really cheap and most basic accommodation. No wonder I got some strong persistent insect bites which lasted for months after my return. Despite all those facts, it was an incredible, fascinating and highly memorable adventure with great experiences. Roland Hummer, January 2018