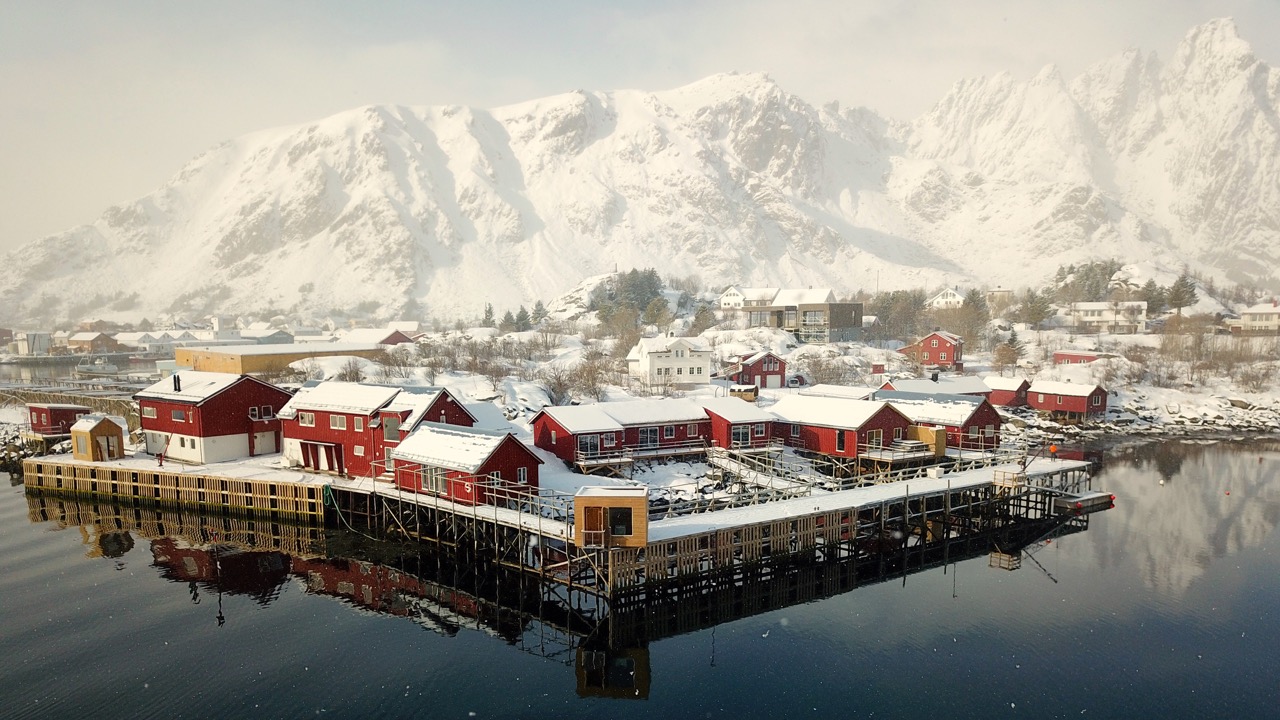 This blog post is a reflection of my 300 days in Lofoten, it’s a visual homage to the breathtaking and abundant beauty of this vast changing landscapes. Few words would suffice to describe my saturated emotions, the deep contentment and the existing balance, caused by nature. That, however, would not fill a blog post so let me describe and dive into the issue more deeply. I arrived in January 2018 to take up my position as Managing Director at Hattvika Lodge in Ballstad, Lofoten. The time of the midnight sun. The midnight sun refers to the sun when it is still visible at the time of the lowest point of its orbit in the sky at midnight, and in areas north of the of the (Arctic) polar circle  in summer. At that time, winter was still not here, not so, the northern lights. 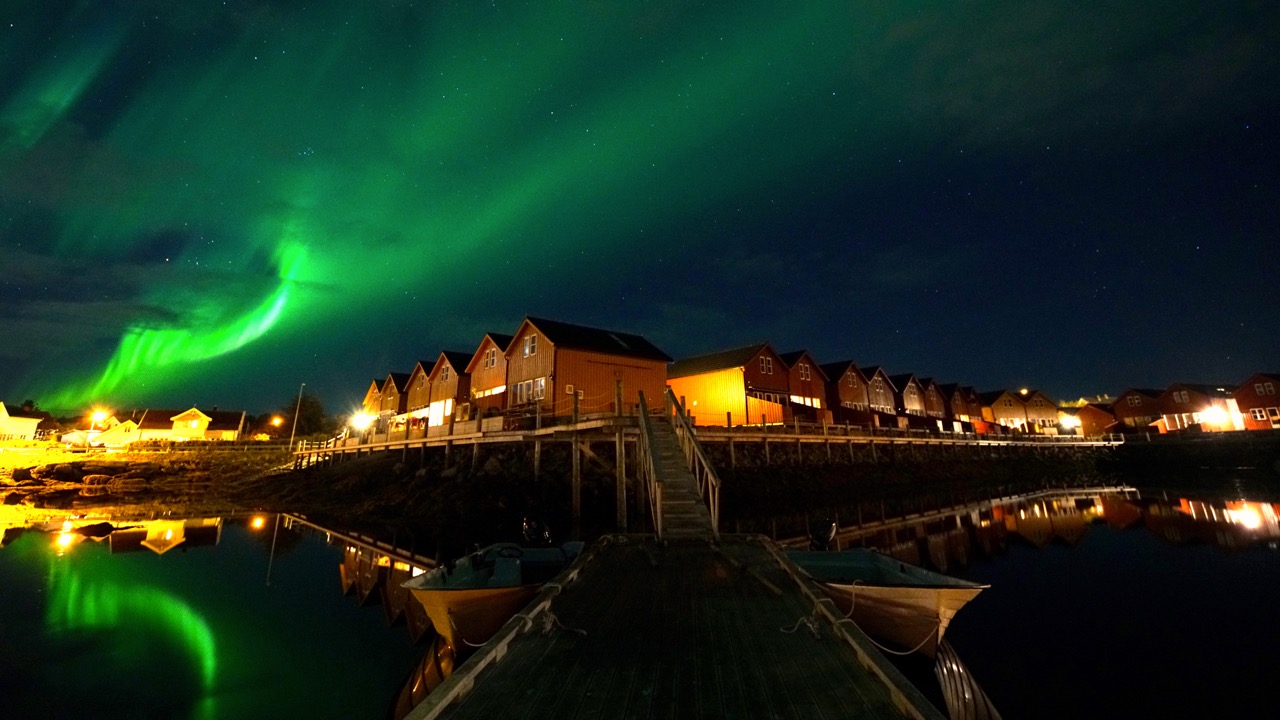 The aurora is a luminous phenomenon through excited nitrogen and oxygen atoms of the high atmosphere whose appearance fascinates me again and again. With incredible elegance, these lights dance across the night sky, mesmerising and captivating observers in a vacuum of joy, fascination and wonder. Definition: Aurora borealis 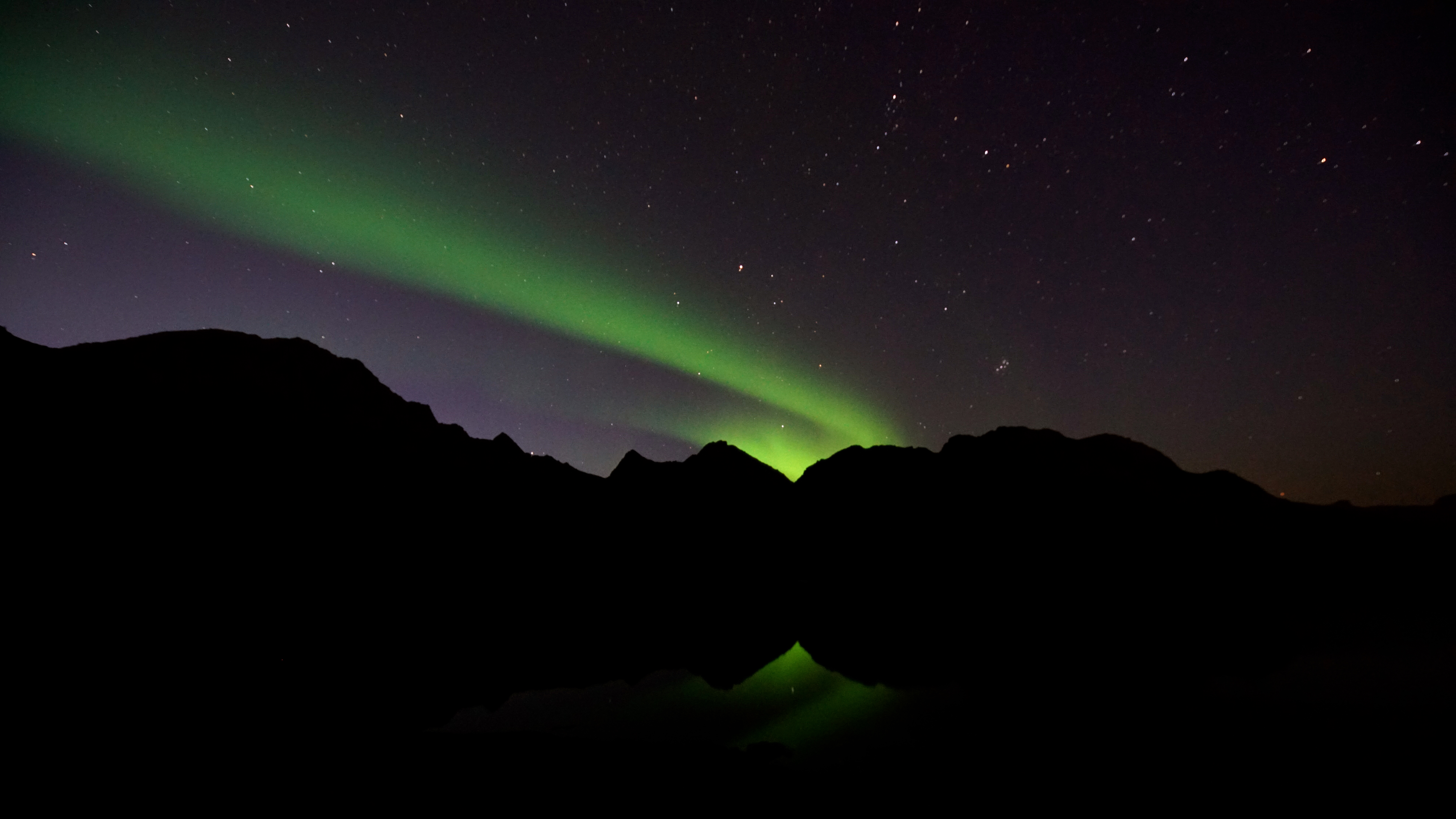 In winter, the focus of outdoor activities is as follows. Northern Lights Photography, Ski Touring, Sea Kayaking, Surfing, Fishing, Mountaineering and Snowshoeing Hikes. There are no lifts on the Lofoten Islands, except for two very short children’s ski lifts. So all the tours we are talking about are, more or less, remote backcountry ski tours. As most of the peaks do not or only seldom exceed 1000 meters in altitude, it is common to go out for two to three ski tours a day. Unspoilt slopes, vast pristine terrain and descents, in every angle of steepness, are here enjoyable throughout the winter. 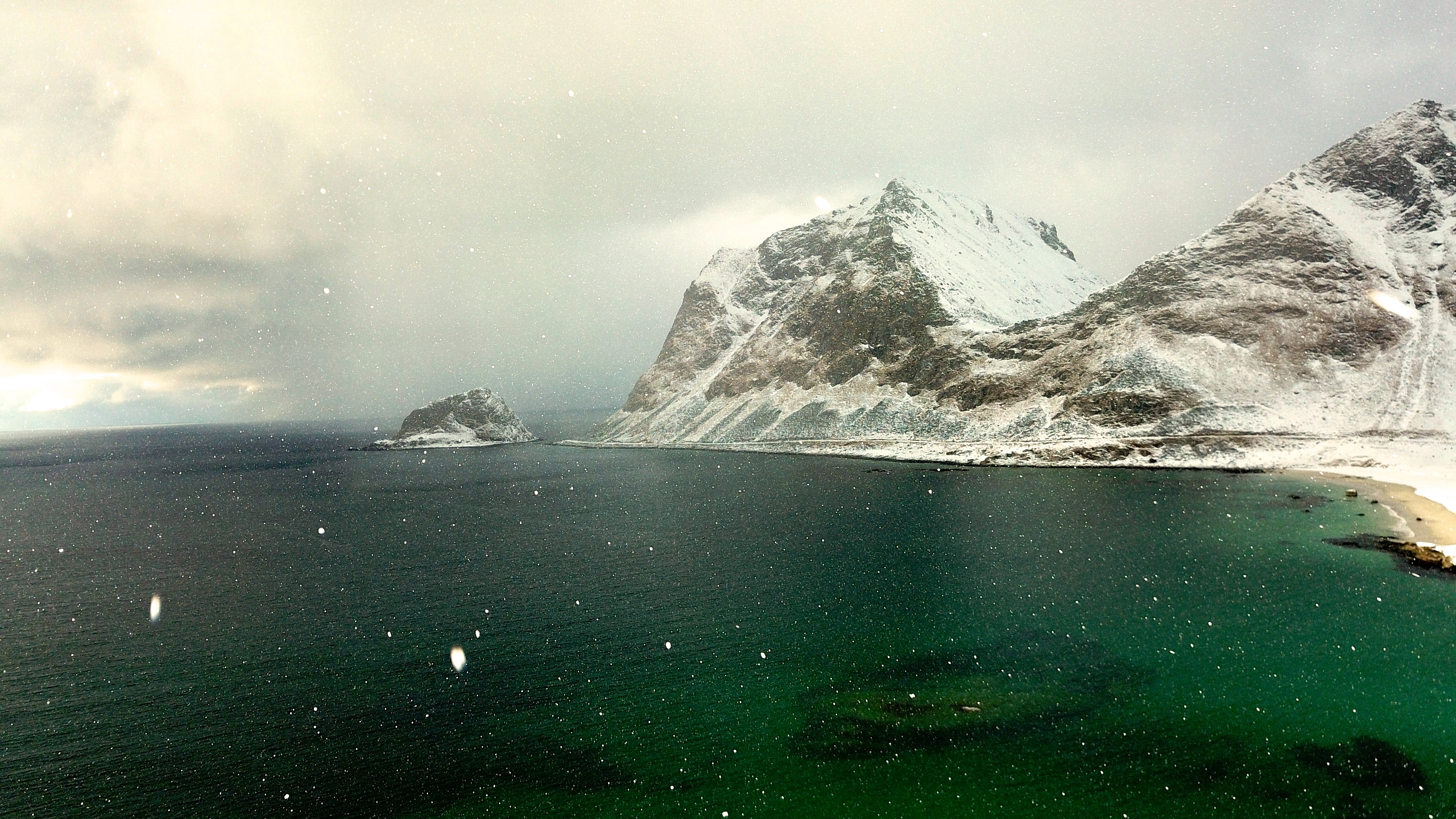 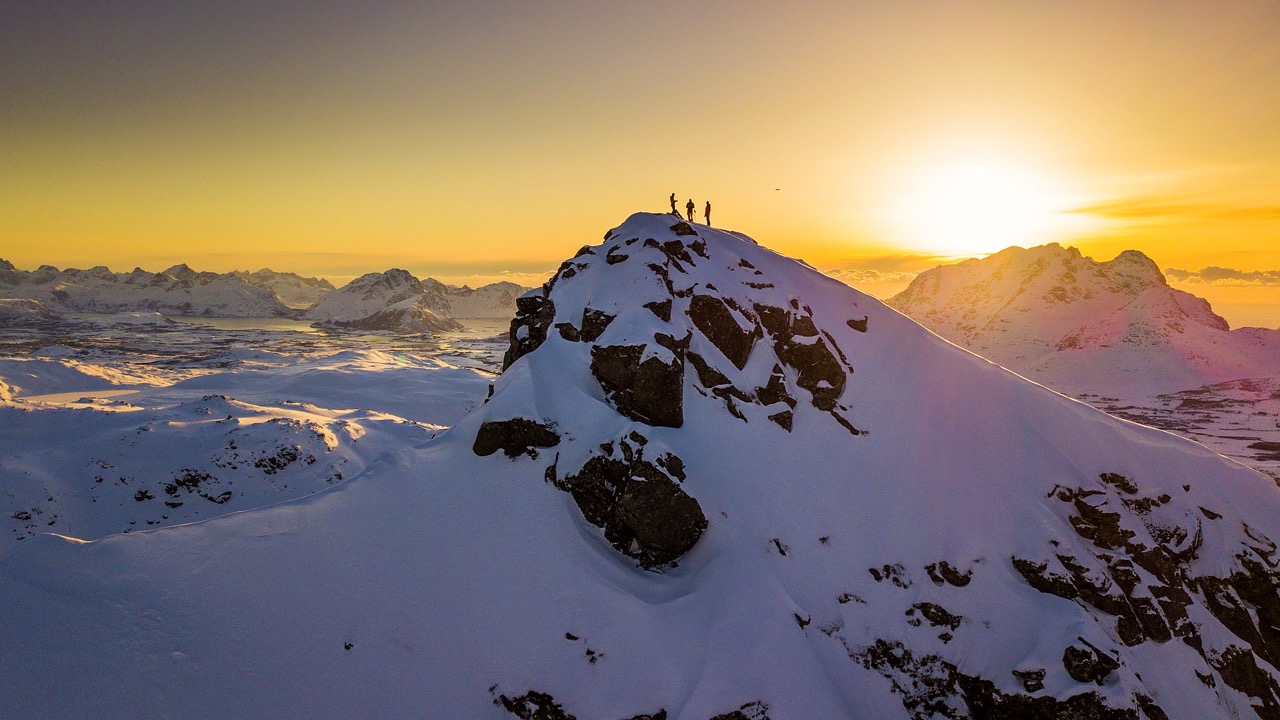 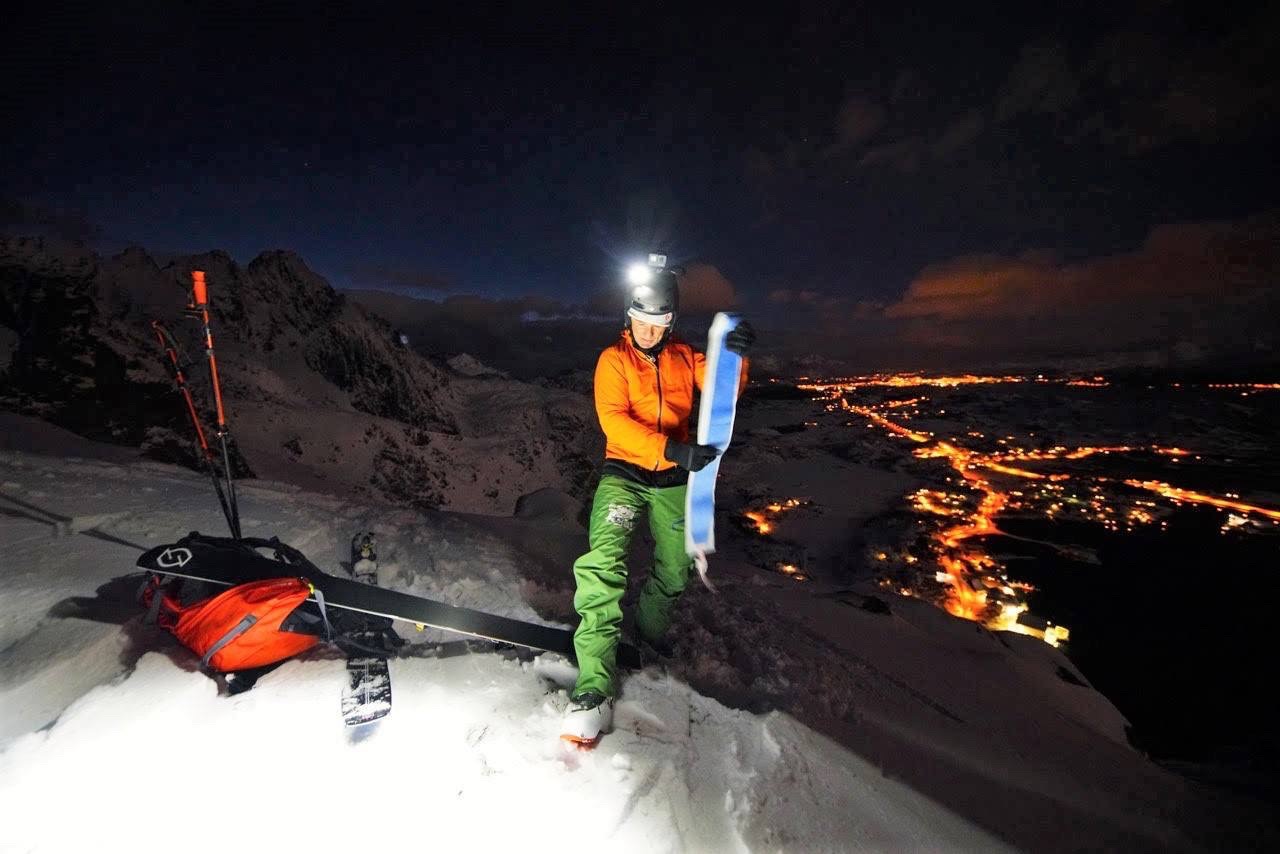 In Lofoten, there are only a few trails, paths and mountain tours, which are signposted and described as such. On my days off I was always out to explore new terrain and with some experience, this is an outdoor enthusiast’s heaven! For guided tours, of course, I relied on trails and mountains well known to me and in the next video you will see such a guided tour with crampons and ice axe to Skottinden 671 m. 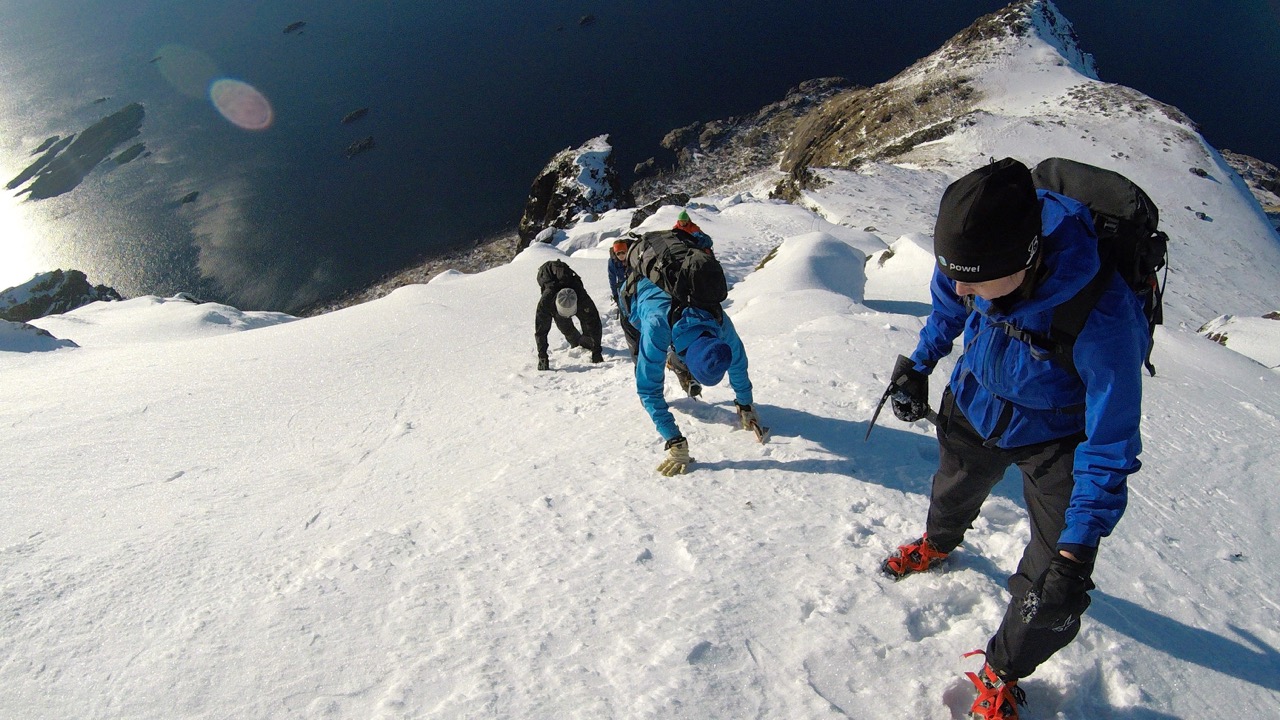 The climate is mild in winter due to the fast flowing ocean current of the Atlantic Gulf Stream and the thermometer rarely shows below -10 degrees. Among the other significant differences compared to the high alpine area in Central Europe is that, in the most real sense of the word, you are outdoor when you walk out the door. And last but not least it’s the size, the amount of space, which results from the sparsely populated landscape, about 24000 inhabitants in Lofoten. So no wonder that the outdoor activities always feel like mini-expeditions. But let’s change now from the mountain peaks to another level, to sea level and the history of Norway’s fishing industry. 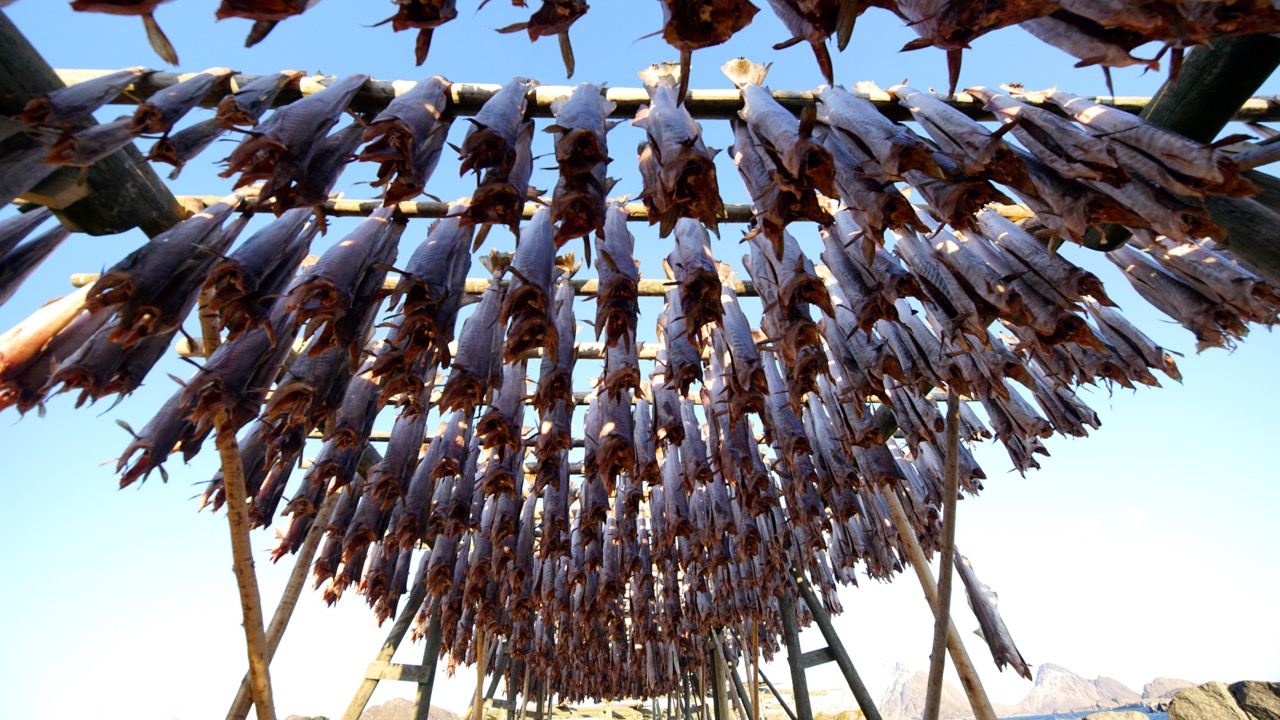 Norway is one of the largest fishing nations in the world and the Norwegian fishing zone extends to the banks of Newfoundland. Mostly cod (Torsk / Skrei), saithe (Sei), haddock (Hyse), herring (sild), mackerel (mackerel) and shrimp (Reker) are caught. In addition, in the past 20 years, fish farming has become more critical in so-called aquacultures. Especially salmon and trout are bred there. Fish and fish products account for 5.3% of the country’s total exports, making them the third largest exporter after oil & gas and metals.

Norway also had a very long whaling tradition. With the ban on commercial whaling in 1986, this industry has largely lost in insignificance. Norway is one of only a few countries in the world who is out for commercial whaling again – albeit in relatively small proportions. This is internationally very contradictory and is strongly criticized by the European Union. On the subject of fishing there is, of course, another, not to be forgotten product, namely fish oil and so the next picture shows you a plant for the production of fish oil. Möller’s supplies the highest quality omega-3 products all over Norway. 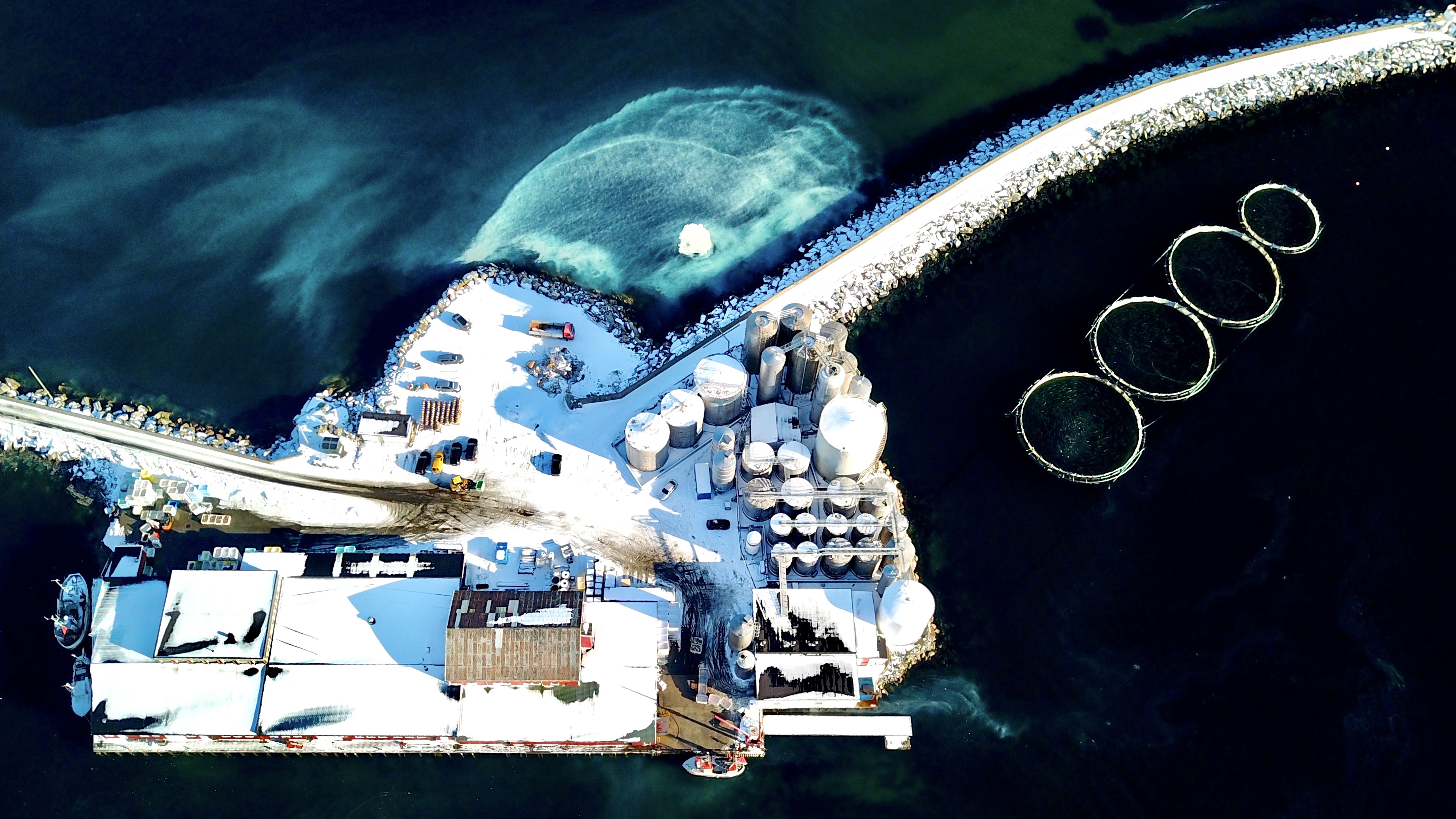 Viewed from the sea, the bizarre mountains towering steeply out of the ocean create a magical fascination, making the Lofoten a true paradise not only for outdoor enthusiasts but also for photographers. A Rib Safari tour with a 600 hp speedboat should be on your ‘To Do’ list while visiting the Lofoten Islands.

After all the ‘speed’ now I need it a bit slower, more manual so it’s time to get in the dry suit and slip into the Kayak. The unspoiled state of the rugged islands, as well as the multitude fjords and turquoise seashores, white sandy beaches, caves and simply the untamed nature, will make a Sea Kayak exploration one of the biggest and most exciting adventures one can experience while visiting Lofoten.

Many Norwegians go paddling their canoes on numerous lakes and inland rivers. Often they bring a tent, a camping stove and sometimes a fishing rod to catch the main ingredient. Everyone in Norway enjoys the right of access to, and passage through, uncultivated land in the countryside. This right is an old consuetudinary law called the allemannsrett (lit. the everyman’s right), that was codified in 1957 with the implementation of the Outdoor Recreation Act. Image: Sea Kayaking from base camp at Hattvika Lodge 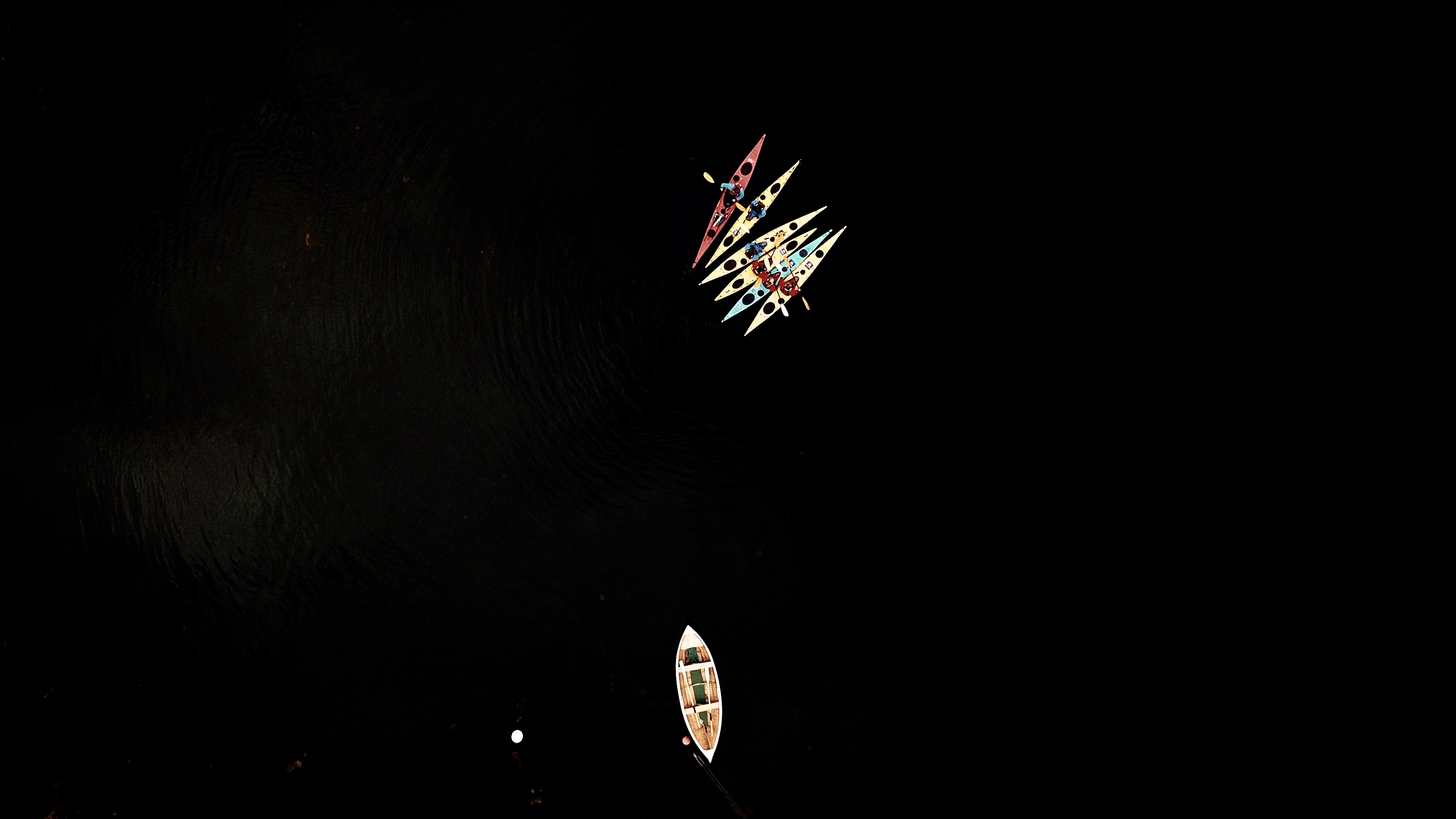 Meanwhile, we have here early April, and slowly the first brown grassy spots appear between the rocks. It gets warmer, and we use those days to ski again from the mountaintops right up to the sandy beaches, even a broken ski binding could deter me to enjoy this fun downhill ride. The quality of the two following videos are quite bad, taken by an old mobile phone. 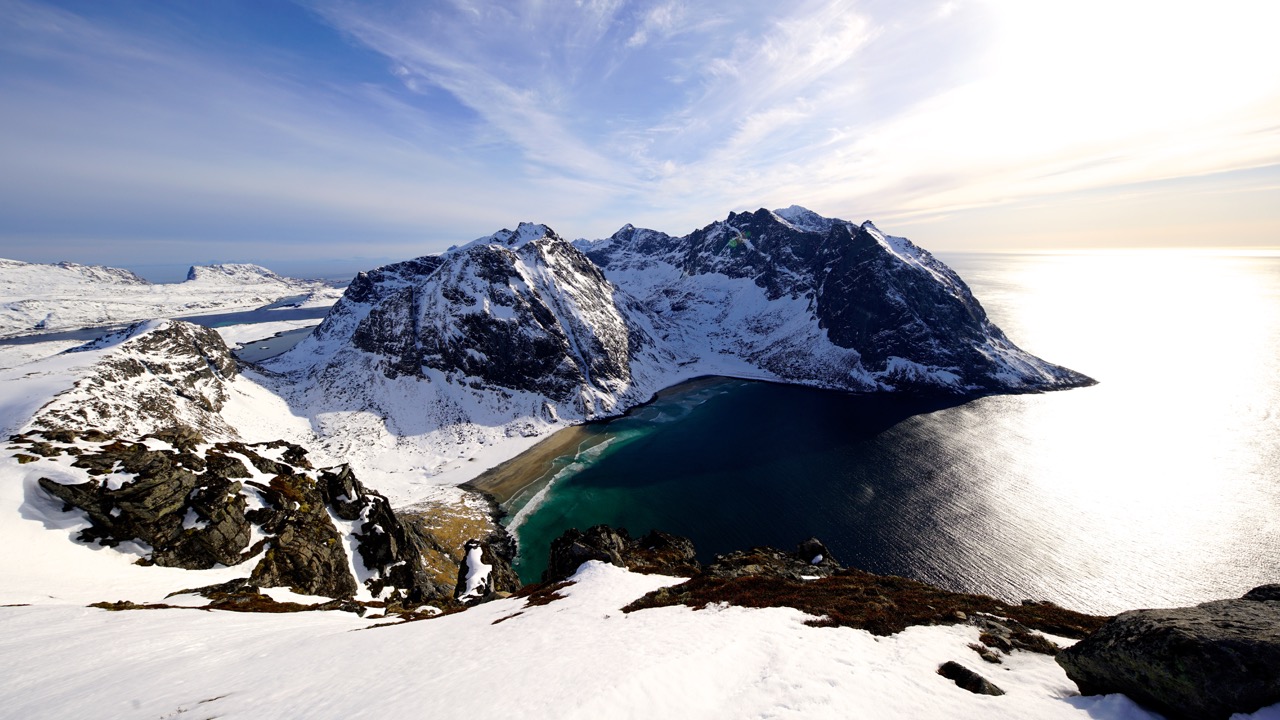 I know that, with all the pictures, it does not look like work, but it deceives about the lodge’s day-to-day business, as well as the many hours of development work in terms of a Hattvika 2020 master plan. And since I introduced you know to almost all outdoor activities which I enjoy and are offered by the lodge (with professional guiding), I now turn to the last two adventures. Surfing and Trail Running!

Unstad Arctic Surf , This beautiful little village at the end of the world, is located at latitude 68 °9 North in the Atlantic Ocean and offers a world-class surfing destination. Due to its location, Unstad Arctic Surf is the most northerly surfing school in the world. At a water temperature of about 10 °, you have to keep moving and be active (even with suits) which was given with me, as a beginner. Now a little note on edge.  In the surf pictures down below I’m unfortunately not the cool guy surfing the waves, more likely I’m the one with the yellow surfboard, walking back after a fun but not very progressive surf lesson. 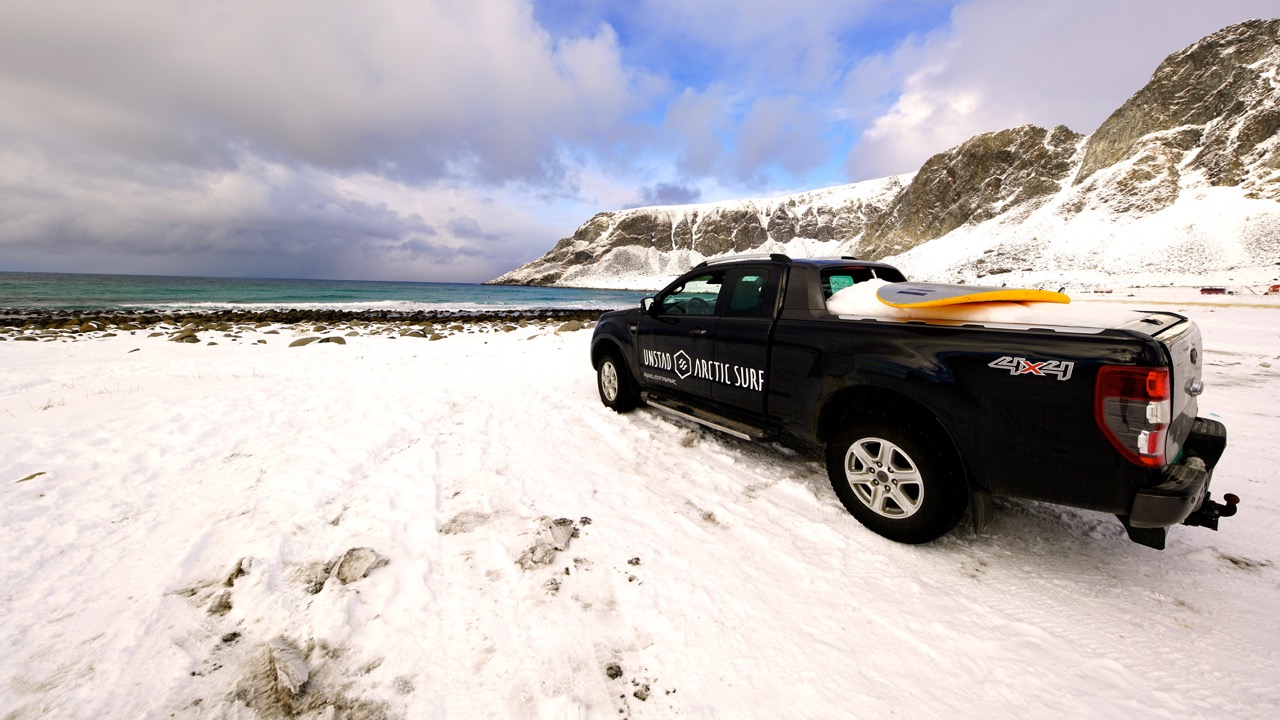 I want to conclude this winter blog post about the Lofoten or some of the outdoor possibilities in this beautiful, continually changing natural landscape to an activity, which moves me particularly (in the most real sense of the word).

Many talks about the Trail Running but what is Trail Running correctly? Trail running or trail running is a race or a run that is carried out in a natural environment (mountain, forest, desert, lowland). The proportion of paved (paved, asphalted, concreted) roads may not exceed 20% of the total distance. The terrain may vary, gravel roads, forest roads, singletrack. Besides, there are specifications for competitions concerning marking the route. Another critical factor in trail running is the autonomy of the runners. Since you usually travel longer, you must bring your equipment and food. Furthermore, the trail running, whether competition or not, nor the aspects of ethics, solidarity, loyalty and respect for the environment or environmental protection for the runner added. Here is the trail running script, which I developed for Hattvika Lodge and used on site during personal coaching or the courses. 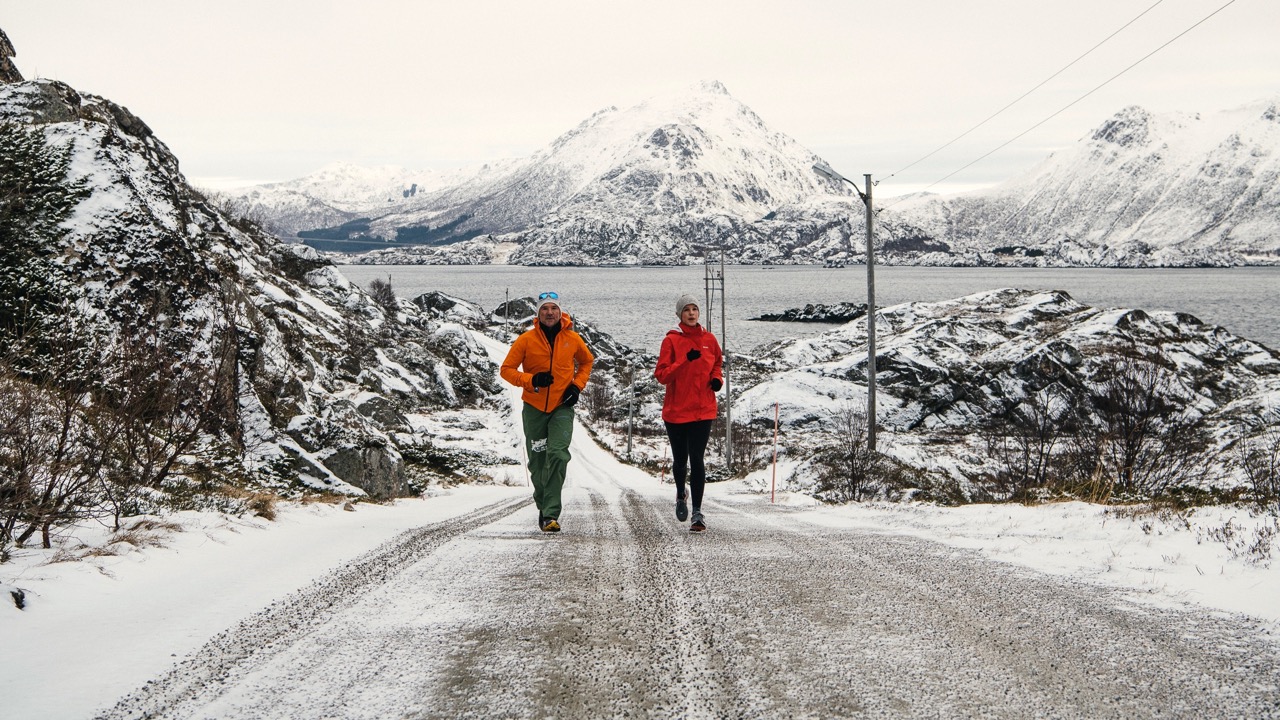 In the second blog post: Homage to nature, Lofoten – Summer you will not be spared some more of my Trail Running videos because the geography and seclusion of Lofoten shaped these fascinating natural landscape to an unforgettable bundle of memories and emotions which ,needed’ to be explored.

The nature in its interplay of colours, compositions of elements, in their most complex as well as most straightforward representation amazed me again and again. At all levels, the conclusion of my experiences during my whole stay is that I got deeply nourished at various levels. It is the absence of the usual everyday life, which did draw all my attention to reduction, vastness and magical beauty. What an honour, January 2018 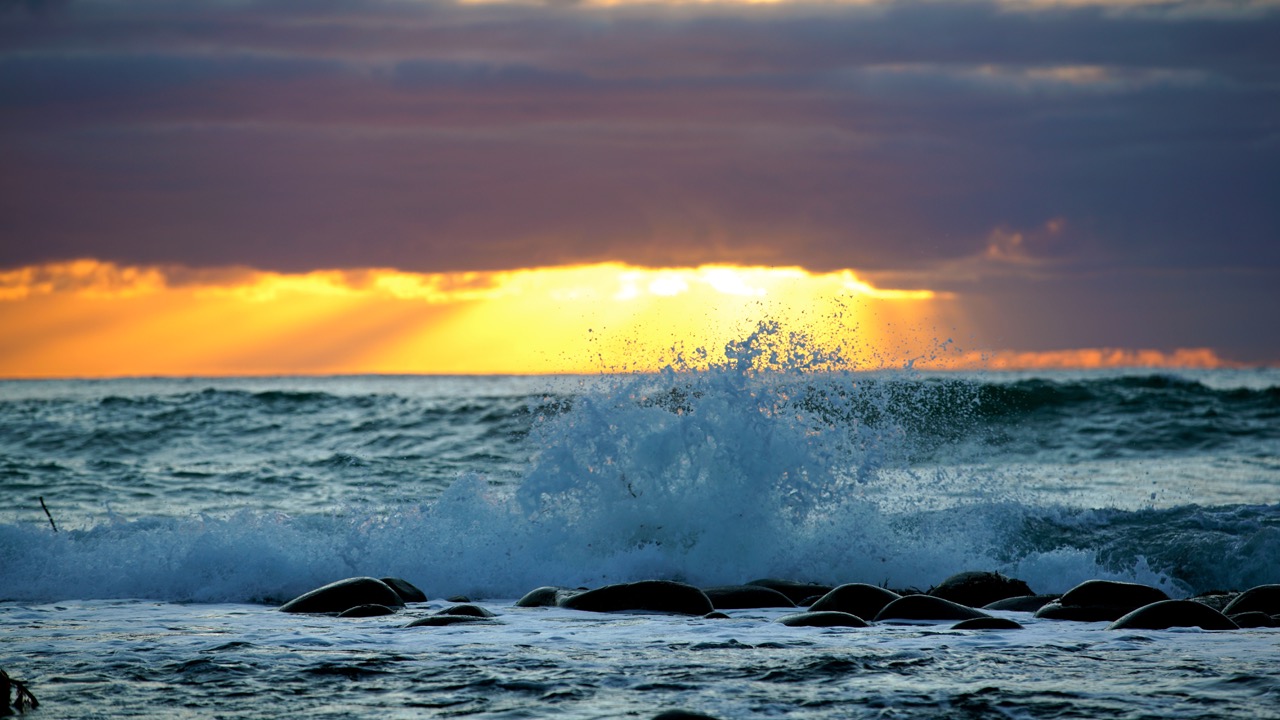 The last weeks I travelled through mega cities such as Seoul, Osaka, Kyoto, Shanghai and Hong Kong. All those...

The ocean is rough, unpredictable and without compromises and I can feel how my grip on the railing is getting...