It took a year of planning until a motley crew of friends met at Vienna airport, full of excitement about our upcoming expedition to Dhaulagiri VII, the Putha Hiunchuli (7246 m) in Dolpo, Western Nepal.

It’s easy to say that Putha Hiunchuli is “technically one of the easier” 7000s in the Dhaulagiri ridge. As this is my first expedition, the information is purely theoretical for me, and yet I already feel offended by the words “technically easy” – as if climbing 7000 m were easy!

Putha Hiunchuli is the most Western of the 7000s in the Dhaulagiri ridge, hence its second name Dhaulagiri VII, The first people to climb it was the British adventurer Jim Roberts and his Sherpa Ang Nyima in 1954. They took the North-western flank, which is a glacial slope with 35 degrees inclination at the most (making it a technically easy climb).

Due to its isolated location in Dolpo and the complicated access routes, the mountain was rarely climbed in the past, but the attractive trek affords easy acclimatization and was the second highlight of our expedition, next to the summit. Dolpo is the highest populated region of Nepal and one of the most unchanged regions of the Himalaya. In the former Tibetan princedom, the “Dolpo Pa” still adhere to the Bön religion, the precursor of Buddhism.

Expedition briefing and sightseeing in Kathmandu

Giddy with anticipation, we reached Kathmandu’s airport on 30th September 2002, where we had two days for rest and further organization. The appointment at the Ministry of Tourism was quickly dealt with by showing our permits, and we could look forward to some sightseeing in Kathmandu. We were most excited about finally visiting the office of the Himalayan Trust, a non-profit organization founded by Sir Edmund and Louise Hillary in the 60s. During tea, we were shown black-and-white photographs and told stories about Sir Hillary’s life and exploits, an experience we kept talking about until late into the night.

Expedition: On the fourth day of our journey we flew from Kathmandu to Nepalgunj, which is in South-western Nepal with grandiose views of the Himalaya, Manaslu, Annapurna, and Dhaulagiri. The morning after a small plane took us to Juphal where we met our supporting team and sherpas

A short trek of about 3 hours took us down to Barbung Khola and across Rupagad to Dunai (2150 m), capital of the Dolpo district. We went along the Barbung Khola river to Tarakot (2500 m) and put up camp above the old village fortifications.

On the eights day, having followed the Barbung Chu, we reached Kagkot (3200 m). Since access and carrier service to Putha Hiunchuli is the reserve of the Dolpa Pa from Kagkot, we had to stop for the day while the 25 kg of luggage was redistributed. We used the time for rest and acclimatization.

Day ten started with a river crossing, at which point we left the Barbung Chu valley to hike across a long slope until it got steeper when we reached the Pangzi pass (4400 m). After fourteen days of traveling, we crossed another pass at 4600 m, which promised us soon reaching base camp. The camp is at 4900 m, close to the Putha Hiunchuli river and with a view of Churen Himal (7371 m). 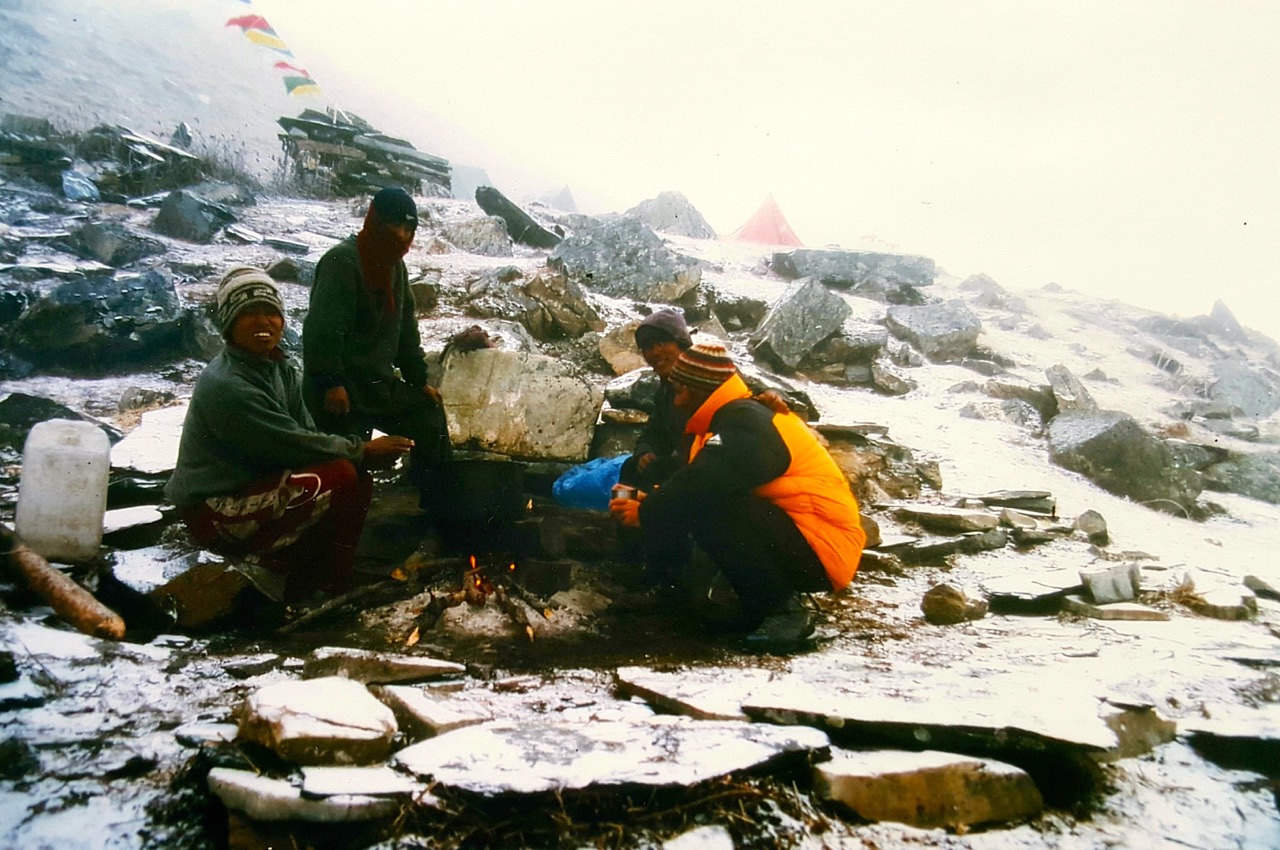 We had calculated ten days for climbing Putha Hiunchuli and had twelve days in all to return to base camp. Depending on weather conditions on the mountain, the time should be enough to acclimatize to the height, put up two high camps at 6300 and 6700 m and successfully reach the summit.

As mentioned, the difficulties for a mountaineer aren’t overwhelming on the 25-30 degrees elevation of the snowy slope. Apart from the occasional crevasse, our chances at reaching the summit depended only on our personal physical condition. What it’s really like:

Right from the start, we moved in small groups of two or three. I got along well with my companion Christian; we knew and understood each other and spent hours without talking, just placing one step after the other, each at his own speed and in his own head. In a situation like that, you have a lot of time to think and reflect. With every meter you gain, more questions seem to appear, yet you keep putting one foot before the other as if in a daze.  The long access hike towards the mountain had cost us energy, but also made us get closer. At that height, your view of the world (and of yourself) is changed. It’s a slippery slope in an extremely dangerous and exposed place, both mentally and physically. But the unpredictable moments of these journeys, when external circumstances cause internal experiences, are precisely why we take them. After putting up our last high camp at the height of 6700 m, only two of the teams were still going ahead. Thomas, Peter, and Hans started the last leg of our climb at about 5 a.m., while Chris and I were still waiting in our tent for the temperatures to rise. Two hours later, just as we were ready to go, Hans returned to us with frostbitten toes. We massaged his feet for about an hour until he felt well enough to treat his extremities himself. Then we followed Thomas and Peter. 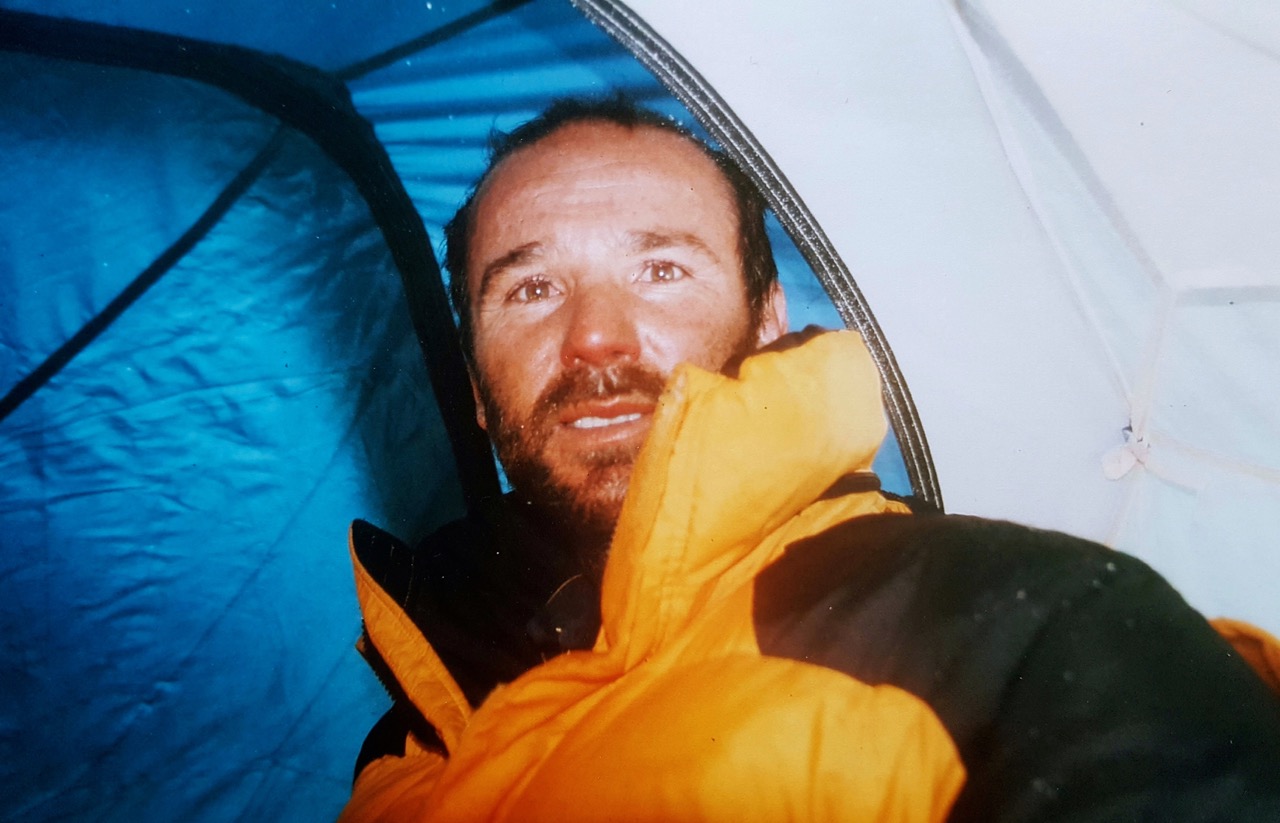 It was a beautiful day, but we keenly felt the altitude and its pressure as we once again put one step after the other towards the summit. Thomas and Peter had reached Putha Hiunchuli’s peak at 7246 meters. In the meantime and met us on their return, exhausted and visibly relieved. They told us about the conditions they had met, we assured them about Hans, and then we parted again, their silhouettes getting smaller as we climbed higher. Late in the afternoon, Chris and I reached the 7000 m mark. it was too late to reach the summit. We felt more frustration than exhaustion. In my mind, I replayed all the preparations made and exertions suffered to get to where we were, and the question WHY got louder and louder. But then I looked at Chris and a wave of empathy connected us and made us reel with joy about what we actually had achieved.

Since we knew there was no way to reach the peak anymore, we sat down at 7000 m, cooked Kaiserschmarrn (instant) and enjoyed the unbelievable view across Western Nepal and of the Dhaulagiri and Annapurna mountains to the East. We stayed there as long as we could before slowly hiking back to high camp, where we stayed another night before returning to base camp. Of course, we were still disappointed, but joy set in again when we reunited with our friends. After another day of rest, we all went back to the camp at Juphal.

The route was familiar, but after the intervening weeks of tension and having to keep up motivation and team spirit, we all felt relieved and could enjoy the four-day hike down to Barbung Chu and across Khanigaon to Tarak this time around. 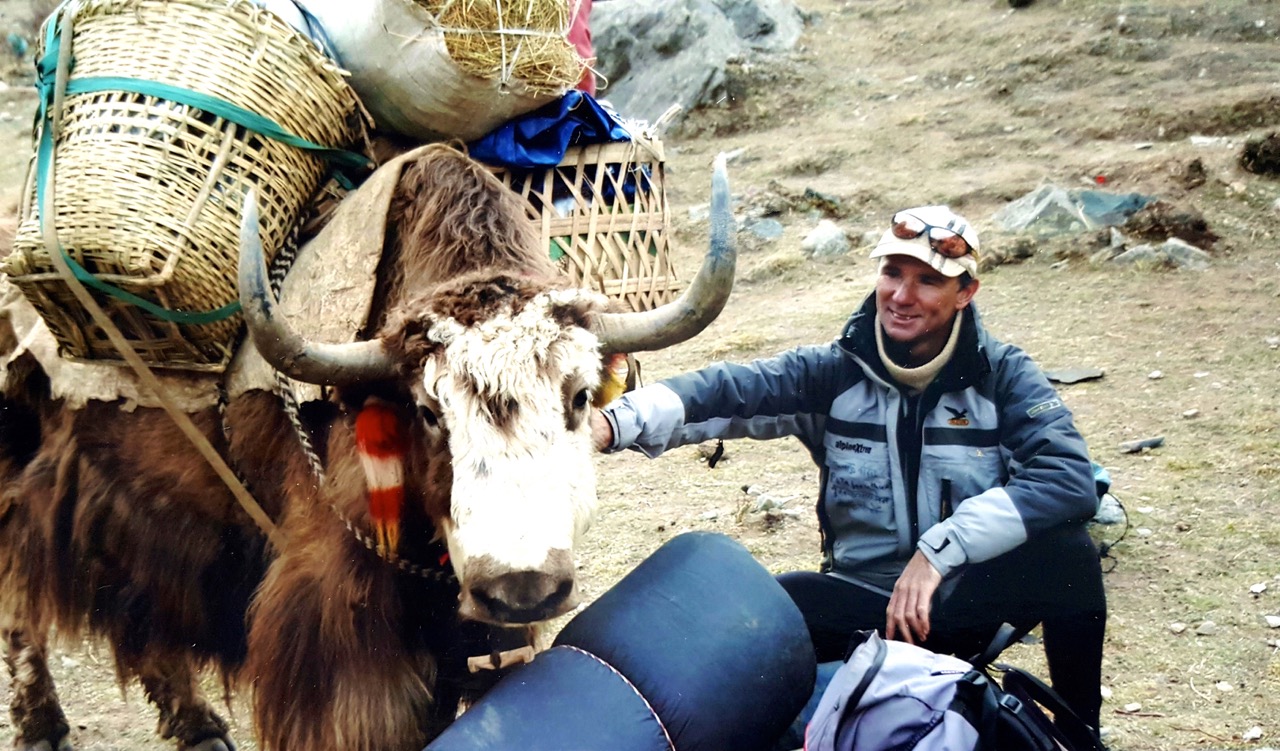 Our wonderful journey concluded in Lasah, the former seat of the Dalai Lama. The control and presence of Chinese government troupes don’t stop there but is seen in the farthest regions of the Tibetan borders by now, a truly sad development.

After a hundred and fifty days north of the Arctic Circle, I long for light and warmth now, it’s mid-May, and...