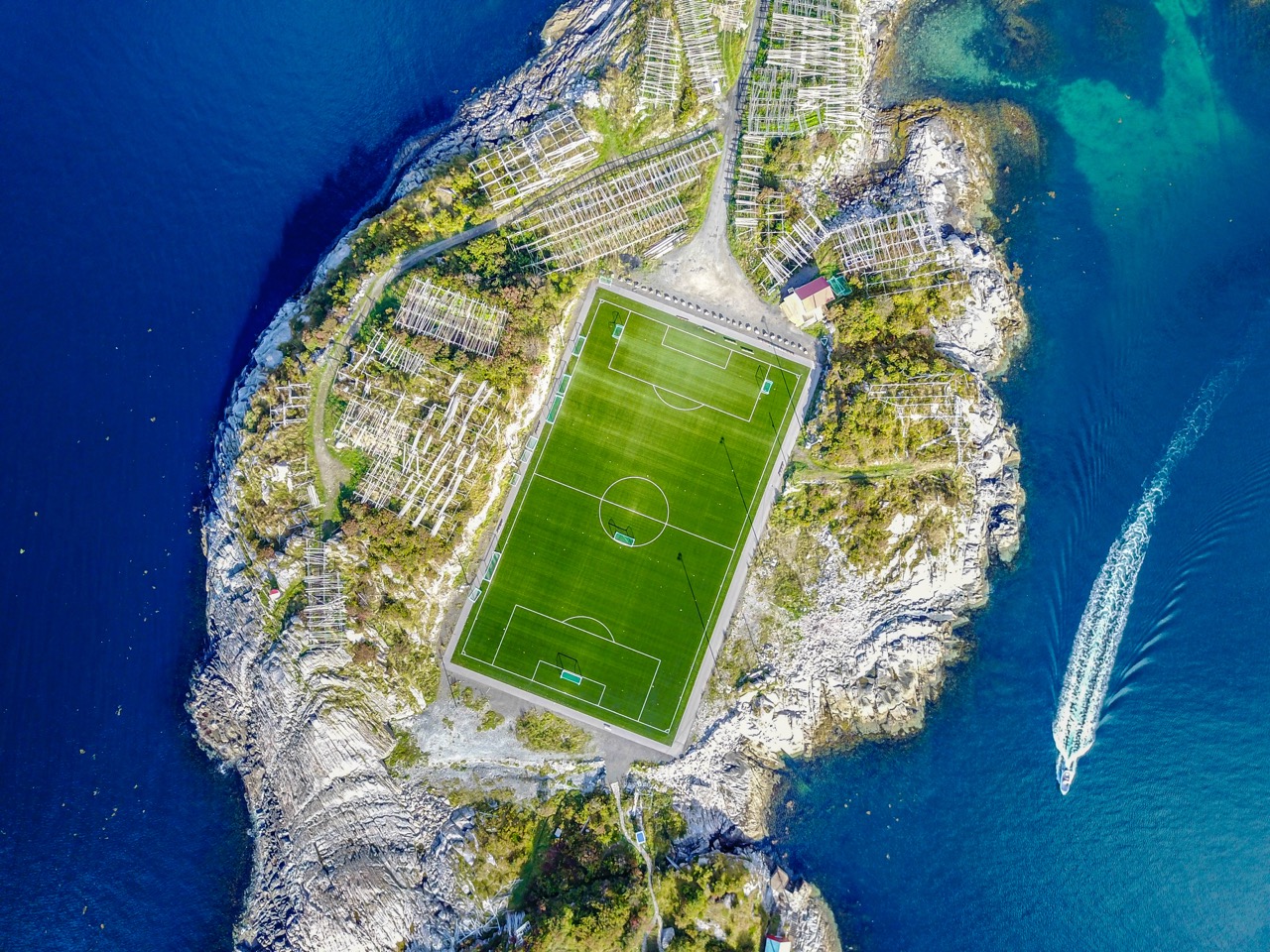 Slowly we were making our way towards the intersection Nr.888 which connects with the E10 just shortly after Vestpollen and continues to Svolvær, the most prominent city in Lofoten. Still, dizzy from what was laying behind us we were breathless by the first visual encounter ‘around the corner.’ No wonder that we called almost everything ‘excessively cheesy’ because it just was too mind-boggling to believe or to describe. The natural environment felt surreal, like a miniature world or a movie set up for ‘Lord of the rings.’ The sky did mirror all kinds of colors on the glassy surface of the fjord, no separation, just unity. 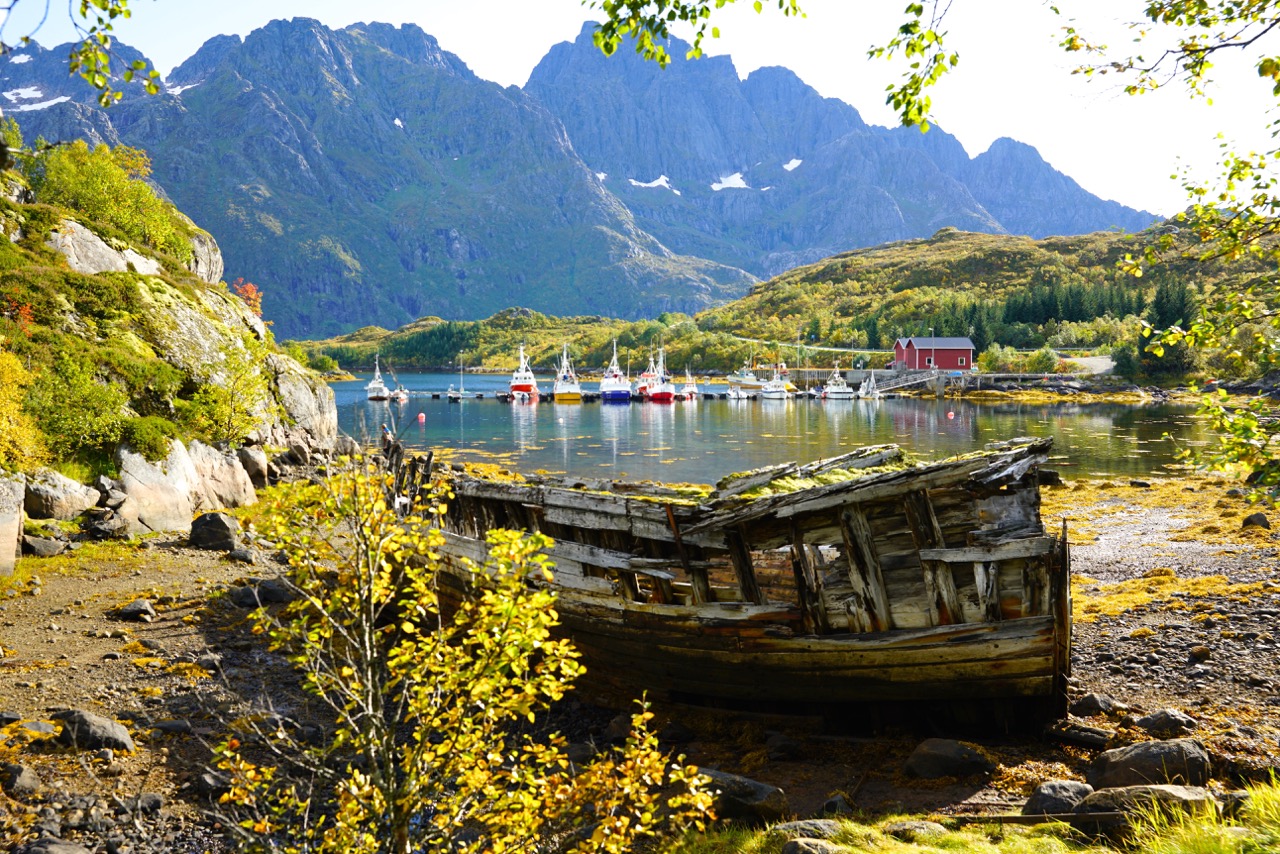 Either you are a thief of words or you have to dig deep into the philosophical aesthetic to come up with some graceful expressions to describe such beauty. 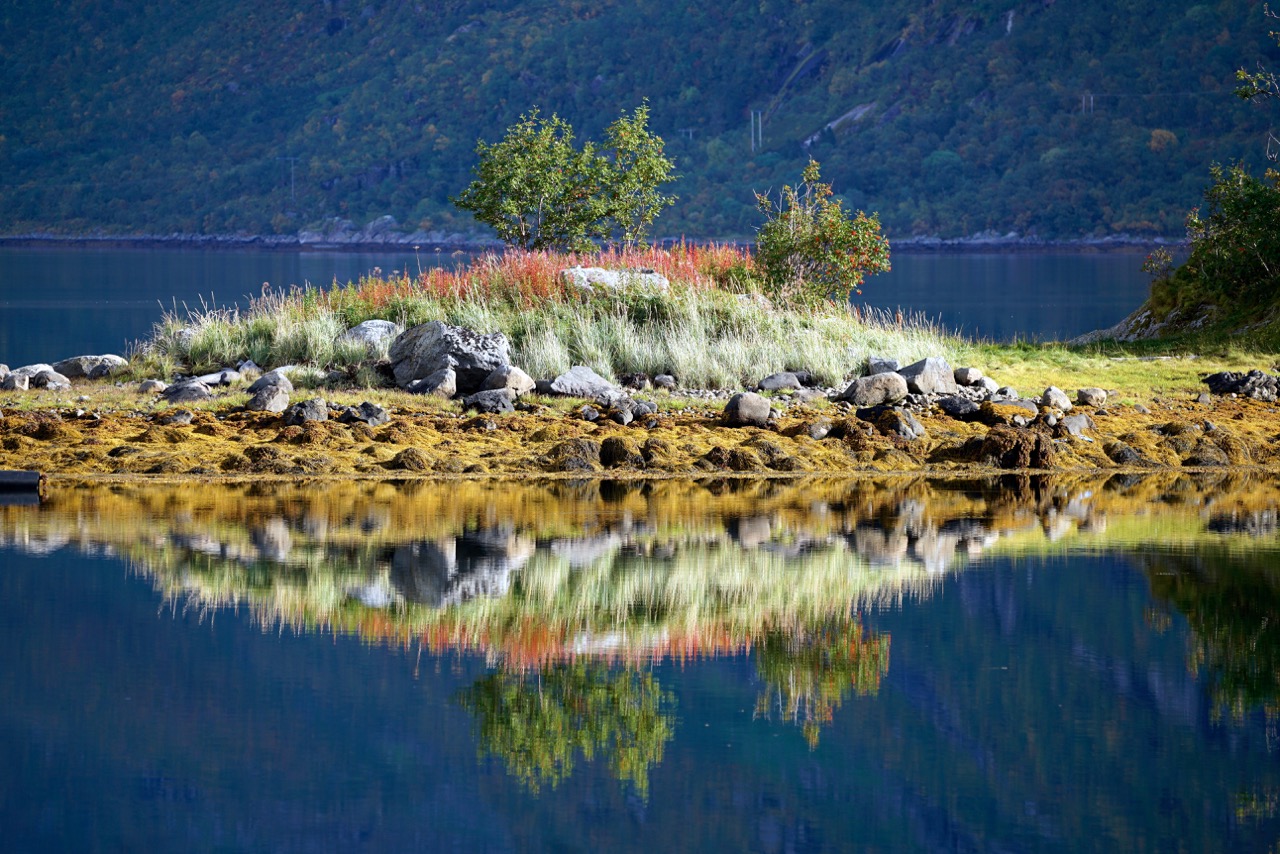 The land of the Troll’s entranced us, and so we did stare at the intangible whose grace overwhelmed us emotionally. Distraught and deeply moved I did spy through the viewfinder and realized how my eyes continually switched between the solver and the rear sight of the camera, like the picture I got by looking through the viewfinder was not real. My finger felt glued to the solver of the camera and it felt like if I was going to take the last pictures of my life. Pure excitement pushed my level of adrenaline to its peak which got only disrupted by gasping for air. 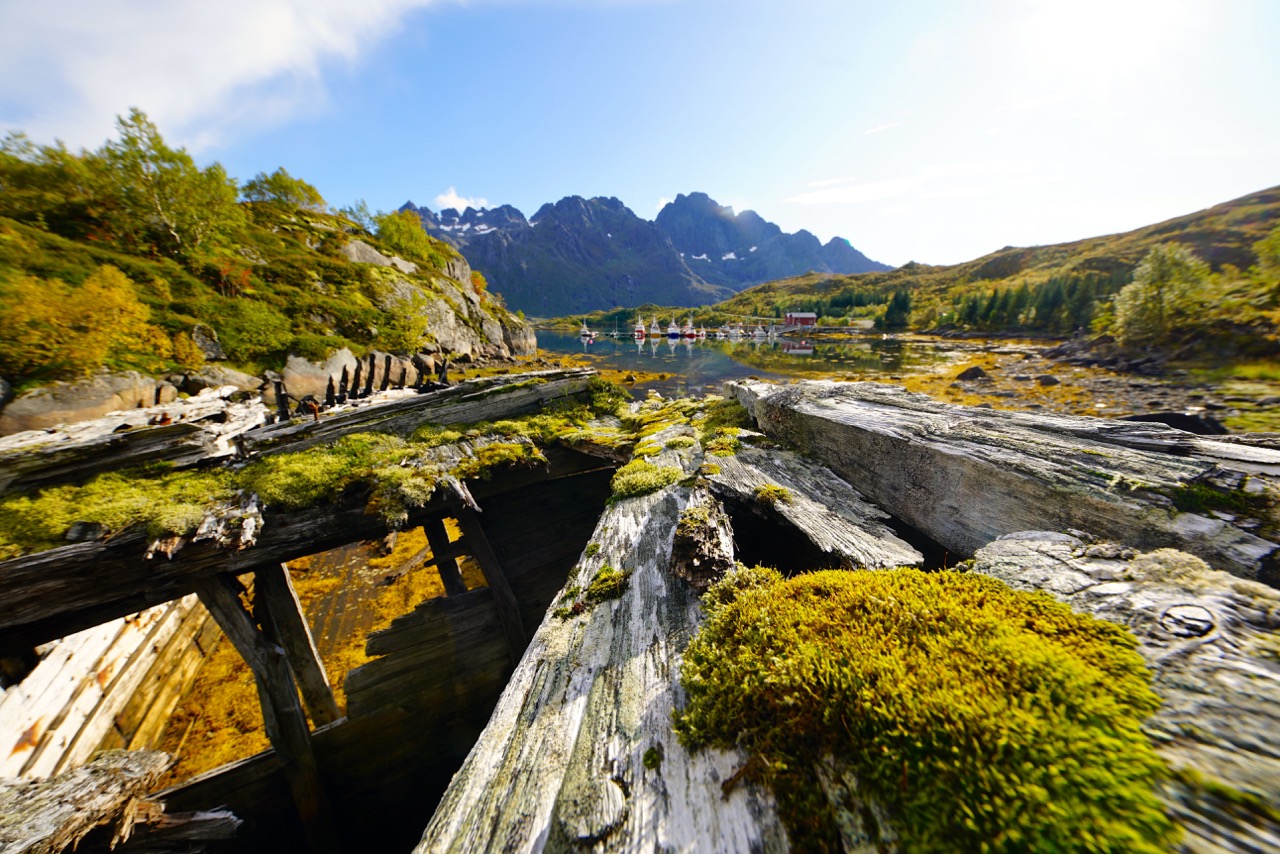 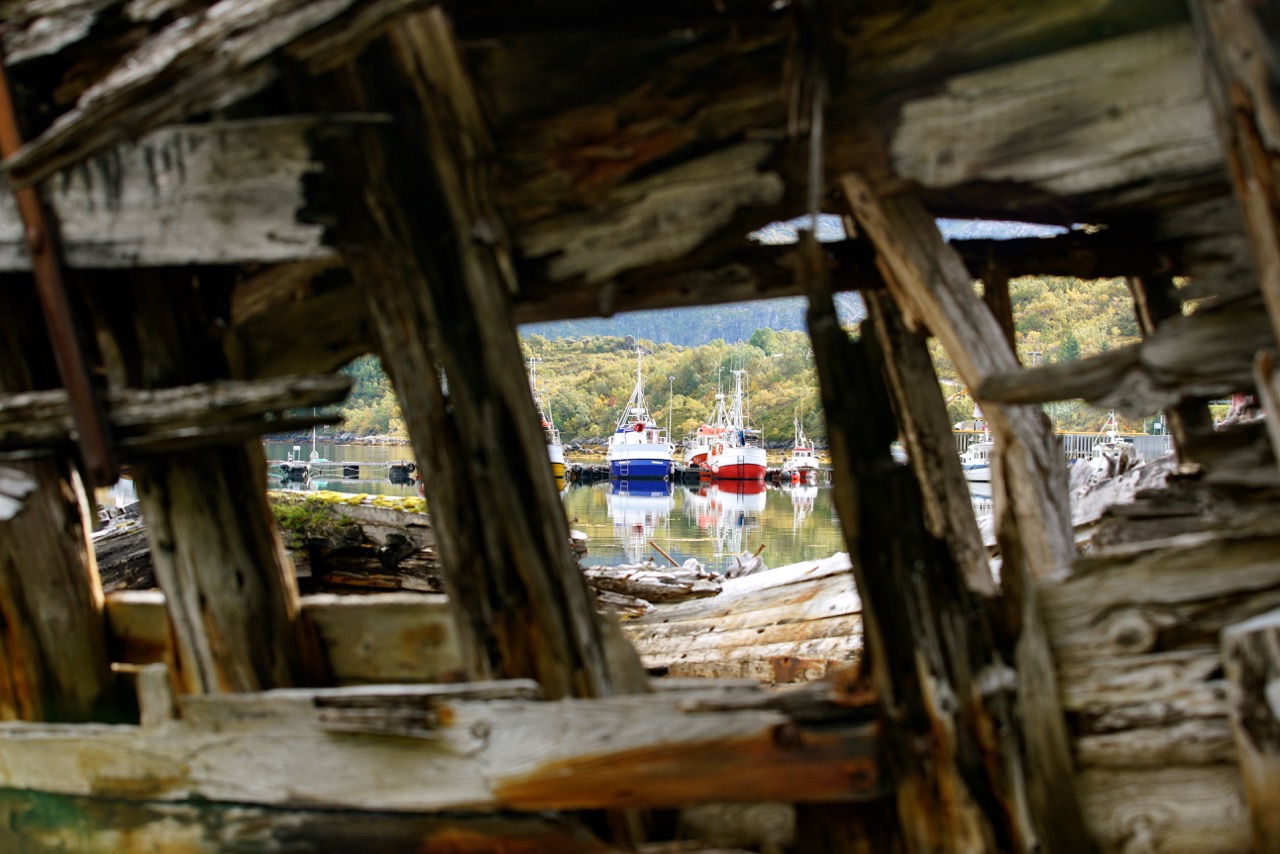 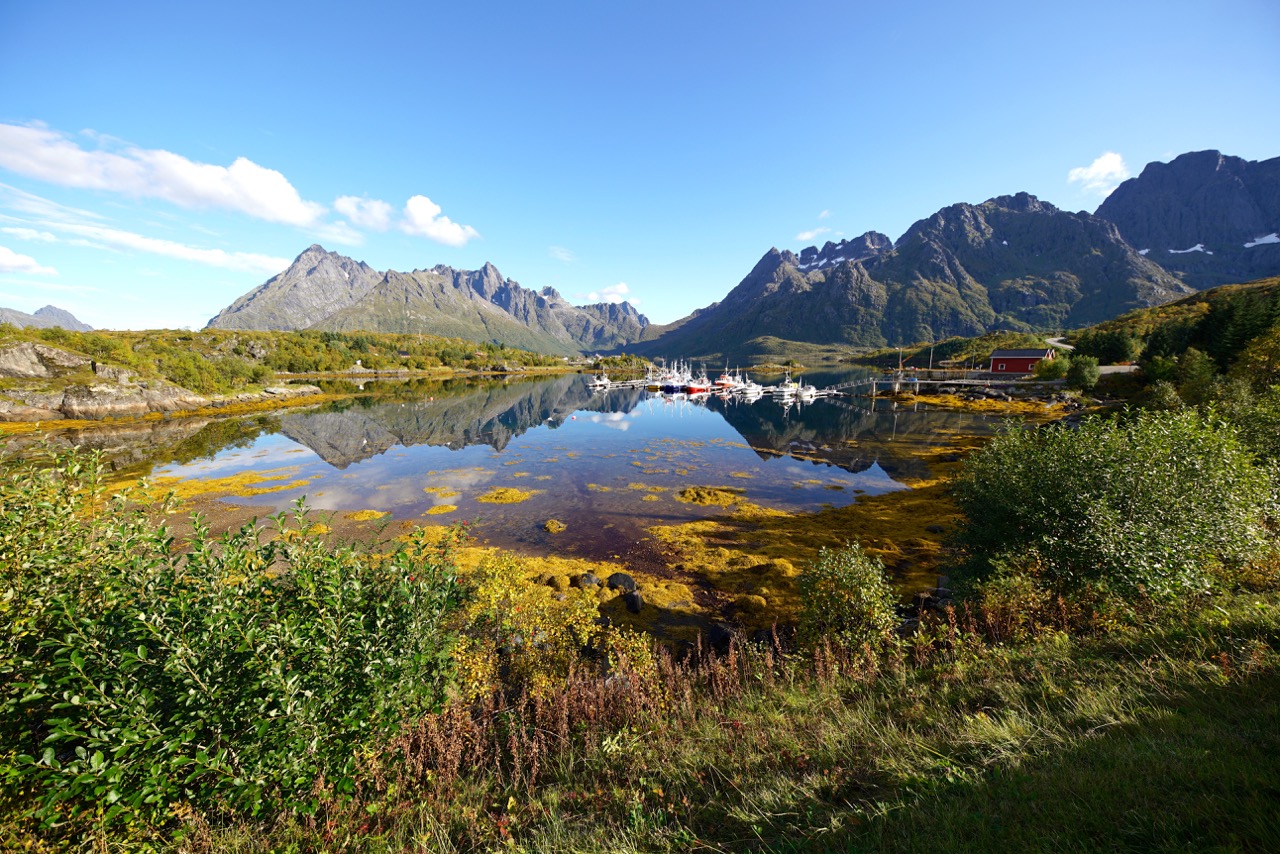 After realizing that the world is not going to perish and that I already had lots of great shots taken I slowly released my finger from the solver. Because of this incredible weather, I was really busy with setting up the tripod, changing lenses and filter, calibrate the drone, checking wind direction, the remote control, and GPS signals, charging the batteries and finding proper locations for the next lift off with the drone. Hm… now it’s a good time to mention and place a personal and vital note. On this journey I needed an average of four hours a day to check and clean all the equipment, to recharge the batteries and to transfer all pictures and videos. In this four ours I did not include the time for taking photographs, either the image editing! It’s not a secret that the morning light usually provides the best light spectrum for images which means, here at the Lofoten, that photographers have long days because most of them travel north to see and take pictures of the Aurora Borealis. So my days began around 06:30 am and went on to about midnight each day, in order to capture the full range of the incredible north. 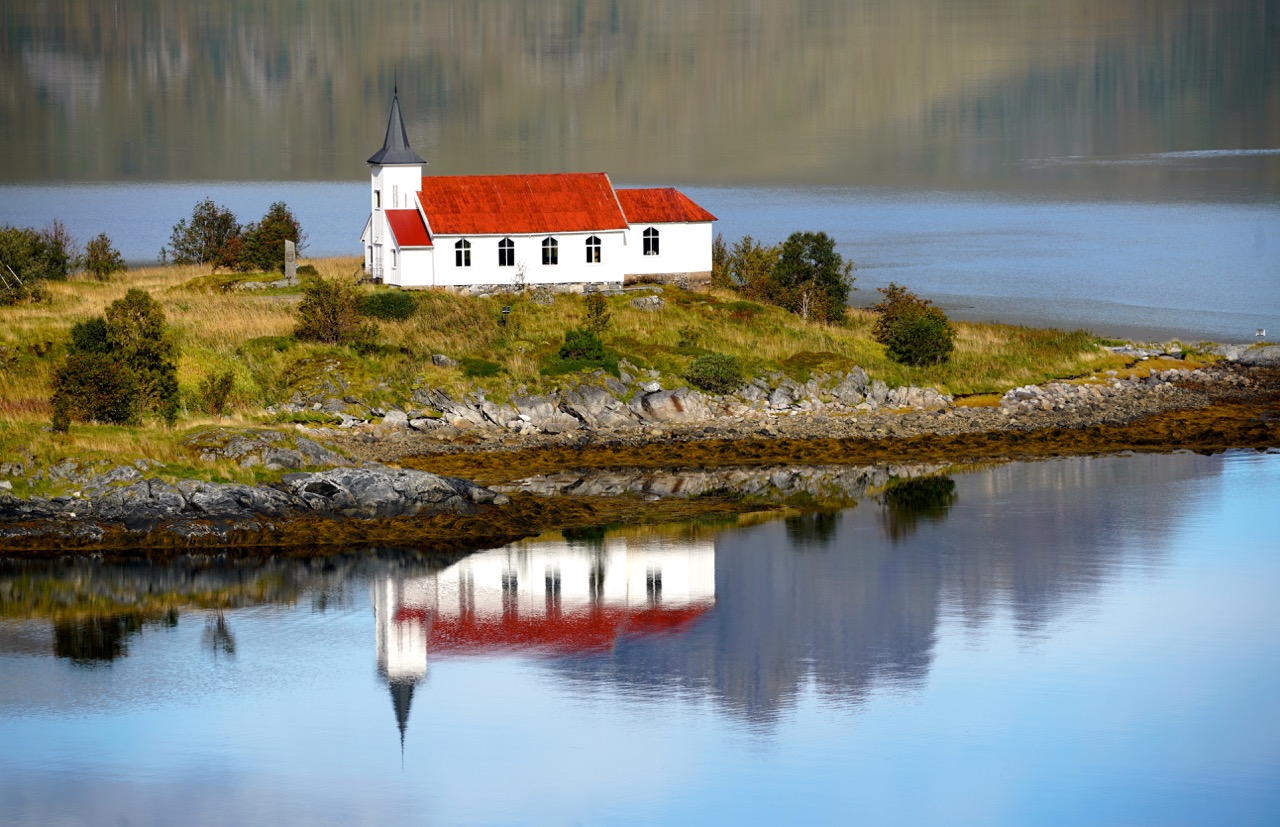 Sildpollnes- Church ⇑is a parish church whose origin goes back to 1891. Restored in 1961 and because the church is so close to the main road, it is a major attractive tourist spot. Sildpollen sjøcamp ⇓ lays just next to the church in Ausnesfjorden, 16 km from Svolvær towards Fiskebøl and about 8 km away from Svolvær Airport – Helle. The mirror reflections in this beautiful fjord are pure pleasure and is a real deception for the eyes. The contours are sharp, the colors unbelievable clear and nuanced, which all adds up to a magnificent mesmerizing and exceptional experience. 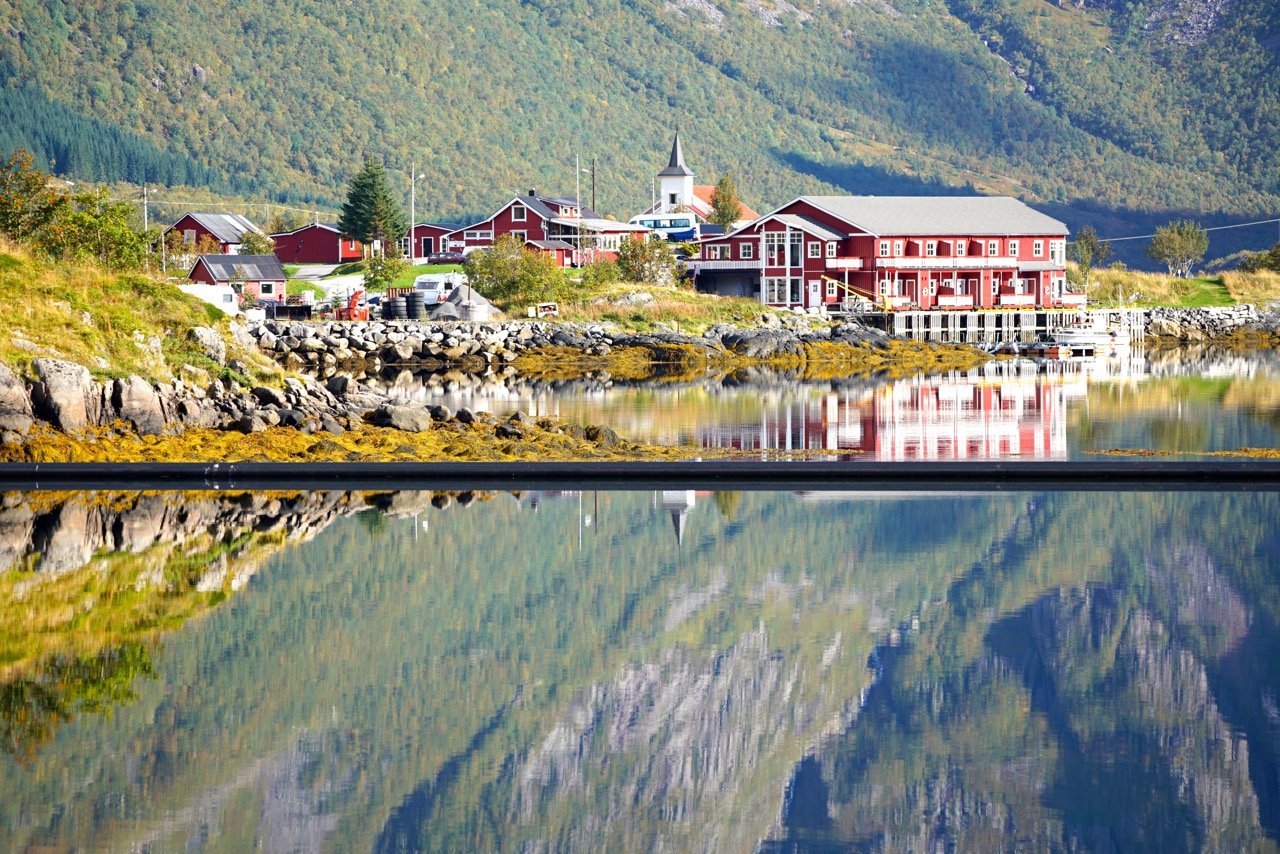 Landscape motives and mirror reflections caused by the crystal clear water are blending all into a surreal picture. 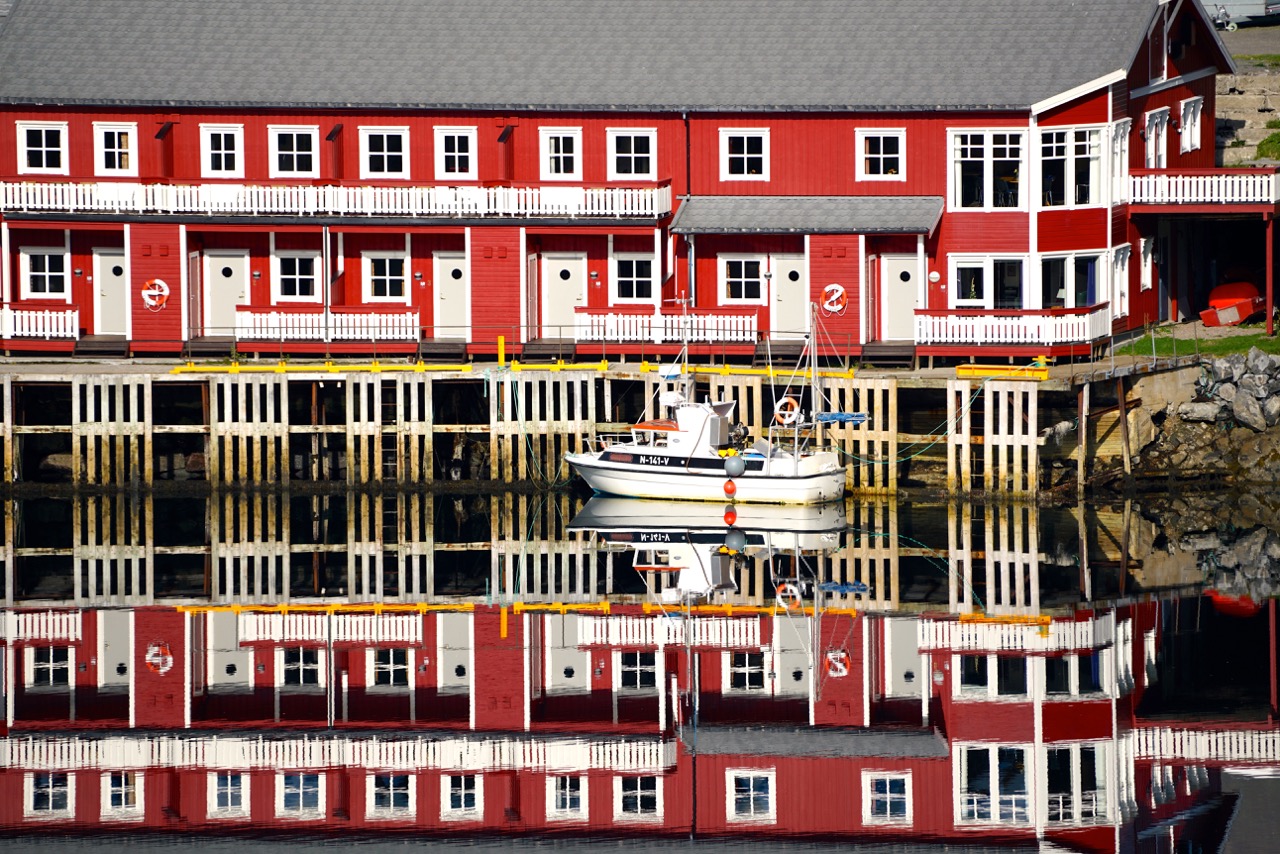 We are reaching Svolvær, a city of 5000 souls which is laying on the Gulf Stream and therefore has quite a mild climate, compared to places on the same latitude as Alaska or Greenland. The average temperature is about + 14° C in July and + 1.8° C in January. The months with the lowest rainfall are May & June where the average is about 40 mm. Svolvær offers besides the amenities of a city lots of exploration possibilities, a great getaway for adventures. 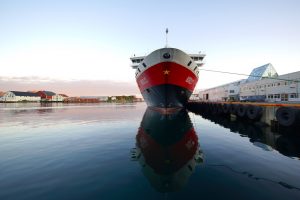 A real tourist magnet is, of course, the Hurtigruten. Hurtigruta, meaning the fast route, is the traditional name for the Norwegian Mailboat, which was sailing along the 2700 km long Norwegian coastline since 1893! Today it is a combination of cargo, passengers, tourists and cruise industry which are sailing between Bergen and Kirkenes in six to seven days. Whereby the actual mail delivery appointed in 1984. In the summertime, those ships are so passing through Trollfjord and Geirangerfjord. Here is a link to the different Hurtigruten Ships.

Svolvær is quite expensive and so we just strolled through town, focused on ‘robbing’ the next coffee shop. The smell was leading us and soon we had two great coffees and most delicious cinnamon buns with icing on top!!! Satisfied and sipping hot coffee we took our time to find a place for the night. Thanks for today’s technologies and WIFI we found something which was ‘slightly’ cheaper than the Thon Hotel. Before leaving town we made another walk through the idyllic harbor side and drove further to Kabelvåg.

At Kabelvåg, just six kilometers away from Svolvær, we found a cozy small house right next to the sheltered harbor. Finally, a couch to stretch the legs, hot shower, and enough sockets to recharge all batteries. Strolling along the pier, watching the sunset and looking towards the lighthouse gave me a glimpse of an idea on how it must have been hundred years ago when the harbor was packed and jammed with wooden fishing boats. But what had happened next was by far one of the most incredible and indescribable things I have witnessed so far. The northern lights, a spectacle of nature. Aurora Borealis…, or polar lights are visible when electrically charged particles of the solar winds from the magnetosphere are hiding oxygen-nitrogen atoms at the upper parts of the atmosphere and then ionize. Due to the energy transmission, the electrons are sliding to the outer bound of its shell but later on back in. This process of electromagnetic radiation is emitted and sends out the light. 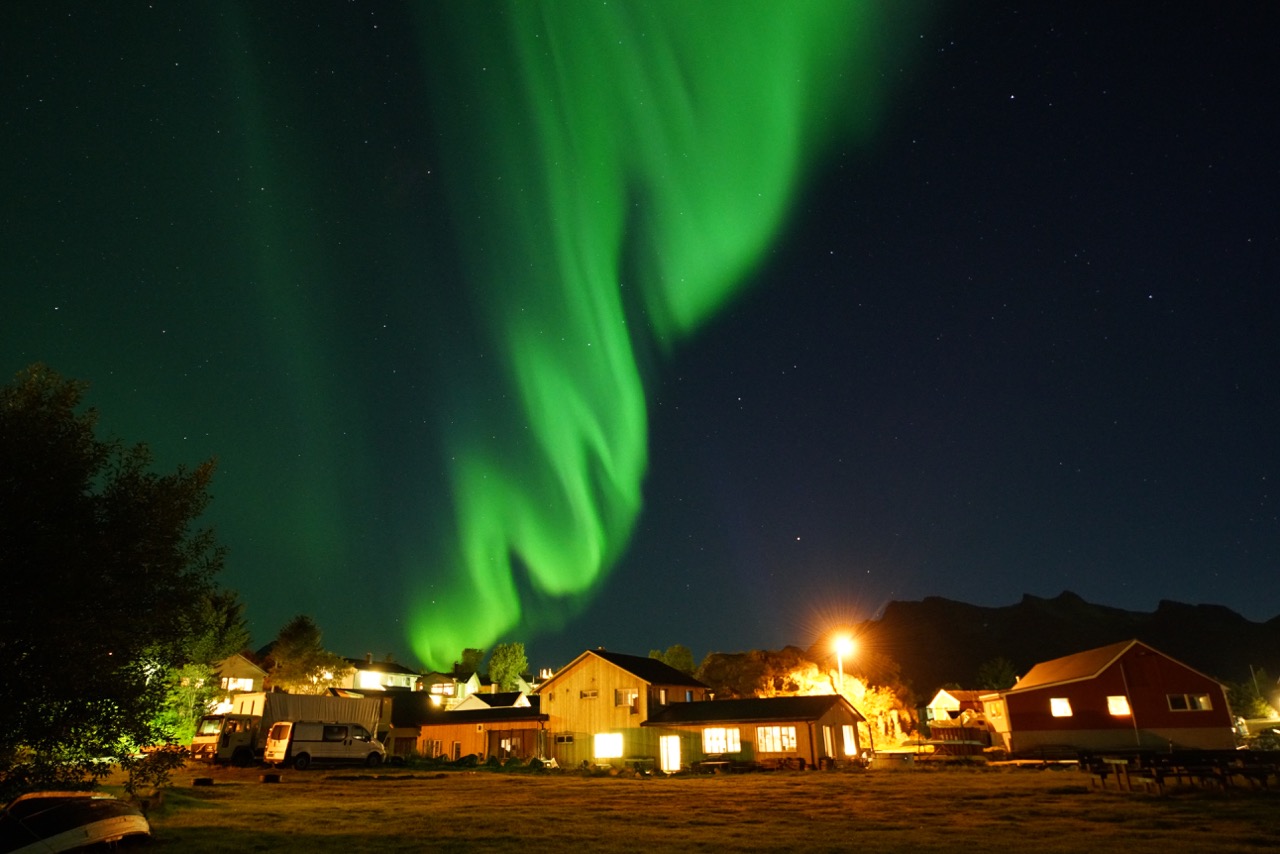 ‘Those messengers of lights’ were causing a real emotional rollercoaster and transferred me into amazement, deep respect and pure delight. The dimensions of it cause a shiver, while the intensity and the movement of this bright light curtains are mesmerizing. Incomparable, unsurpassed, unmeasurable!

Next morning while holding on to a hot cup of coffee I was looking up to the sky, shaking my head because of this extraordinary northern lights experience from last night. We had to move on, the batteries were recharged and ourselves in pure excitement regarding heading towards Henningsvær. After all, I knew, heard and read about this place, Henningsvær attracted me like a magnet. Besides that, the distance from where we were wasn’t to fare, which is not unusual for the Lofoten, because everything seems to be close. So from Kabelvåg to Henningsvær, it is just 20 km. Henningsvær is a well-known fishing village at Lofoten, also known as ‘Venice of the North’. Well…, that sounds need but is a bit exaggerated! I love this place with the traditional fishing boats, the cute center with the coffee shops and the way they are promoting the town. Culture and art is a central statement in this village with 500 inhabitants. 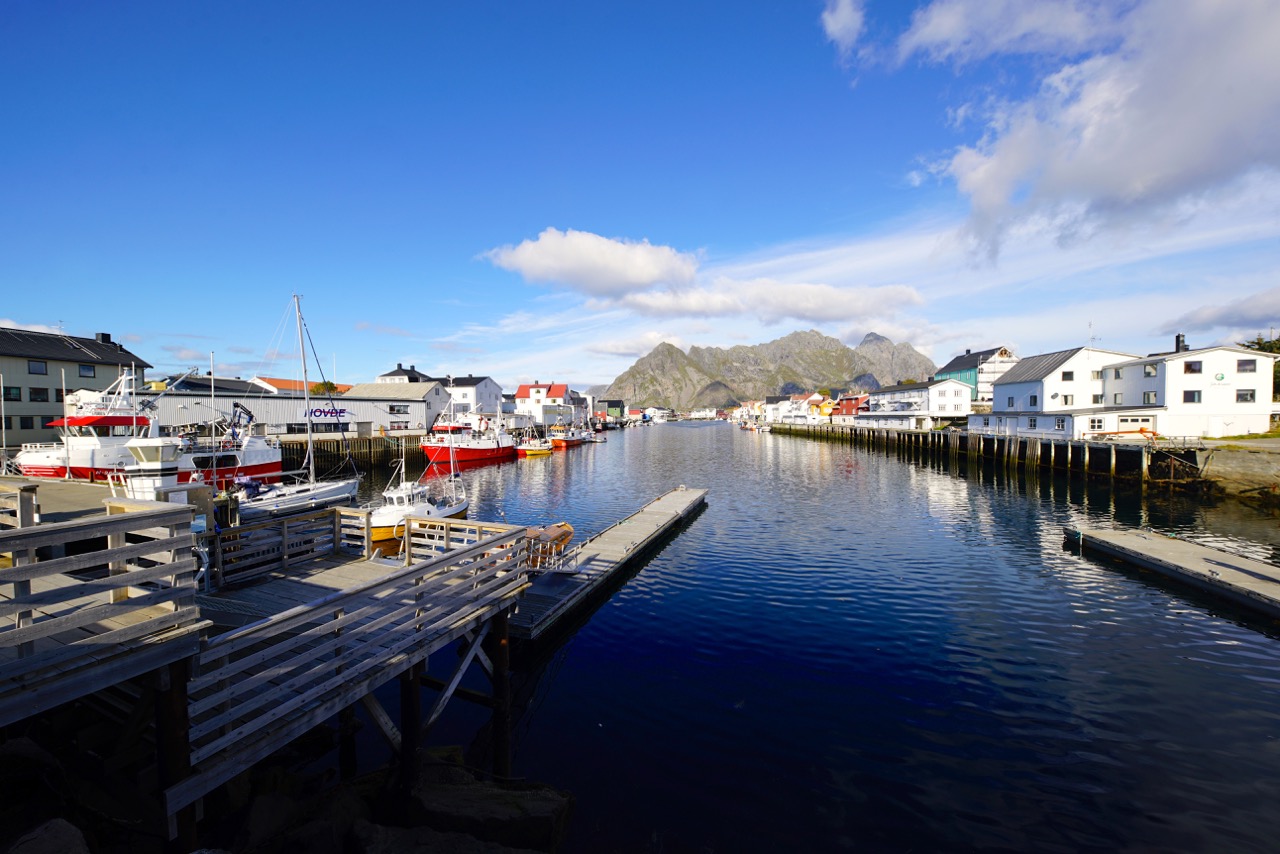 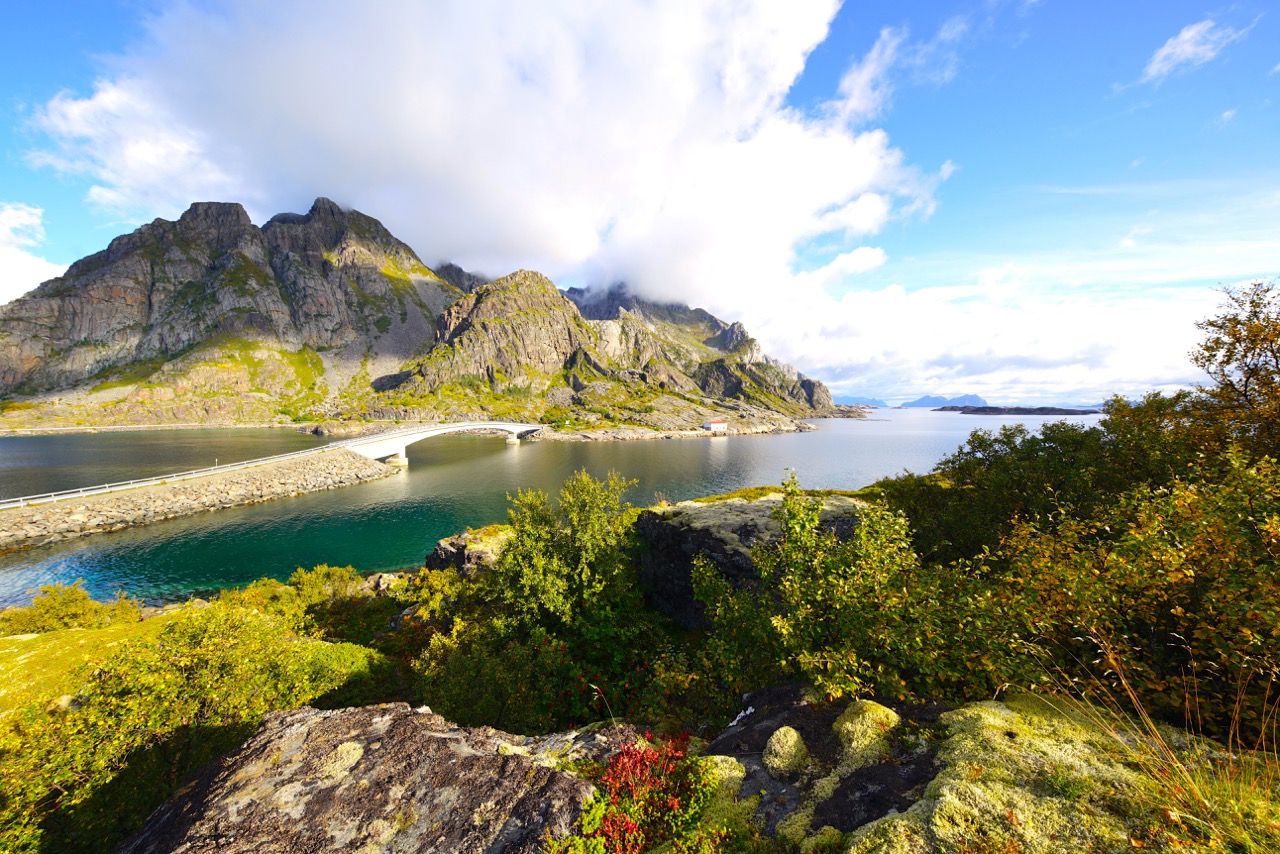 As mentioned the topics art & culture are omnipresent and playing a general, significant and more critical role all over the country. Installations, objects and street art are now found often, even in smaller villages along the coast. The follow picture mirrors the landscape from the opposite side from where I was standing. 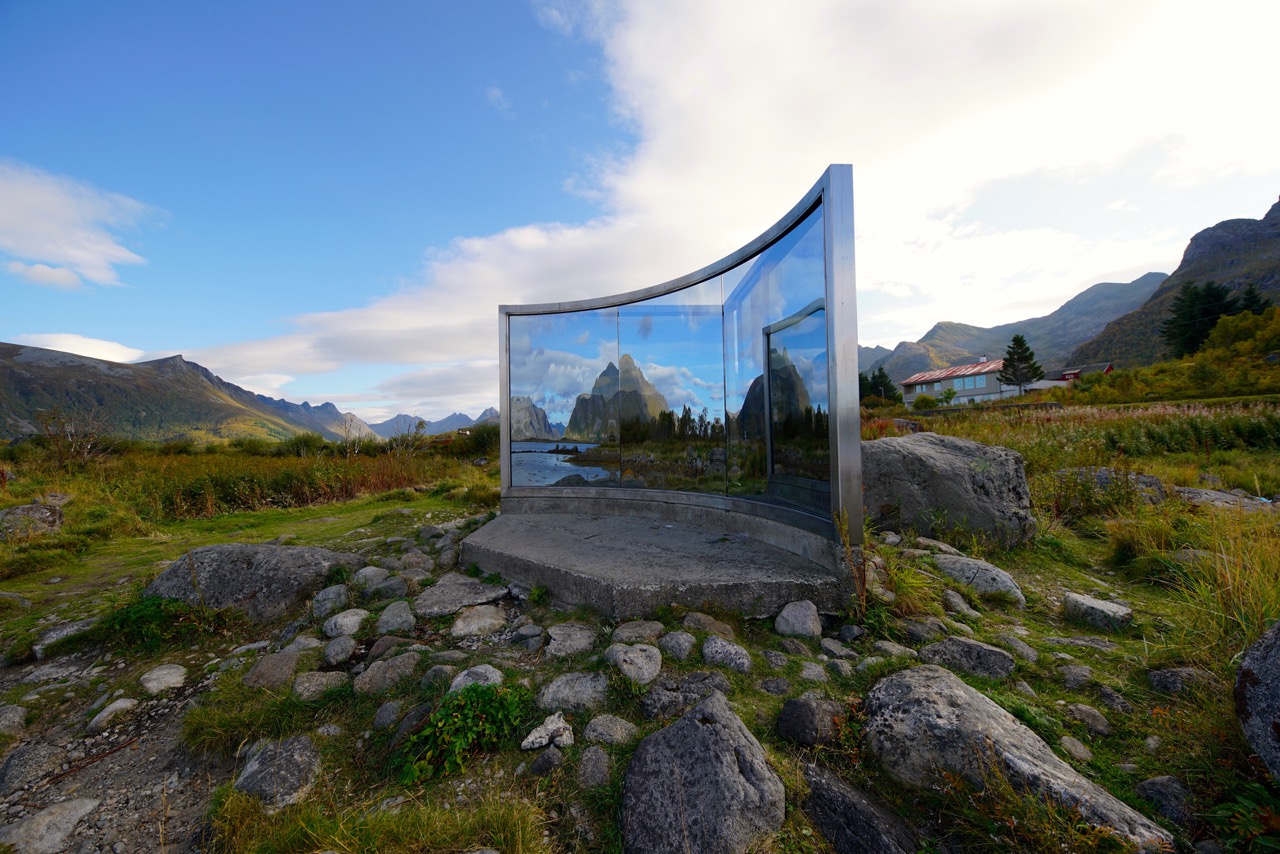 Besides all the tempting outdoor activities like rock climbing, mountain biking, hiking, sea kayaking, diving, fishing etc. the indoor choices are very seducing as well. Coffee shops with a cozy interior and even better cakes and muffins (especially the cinnamon buns with icing) are providing there share to make you feel like home. 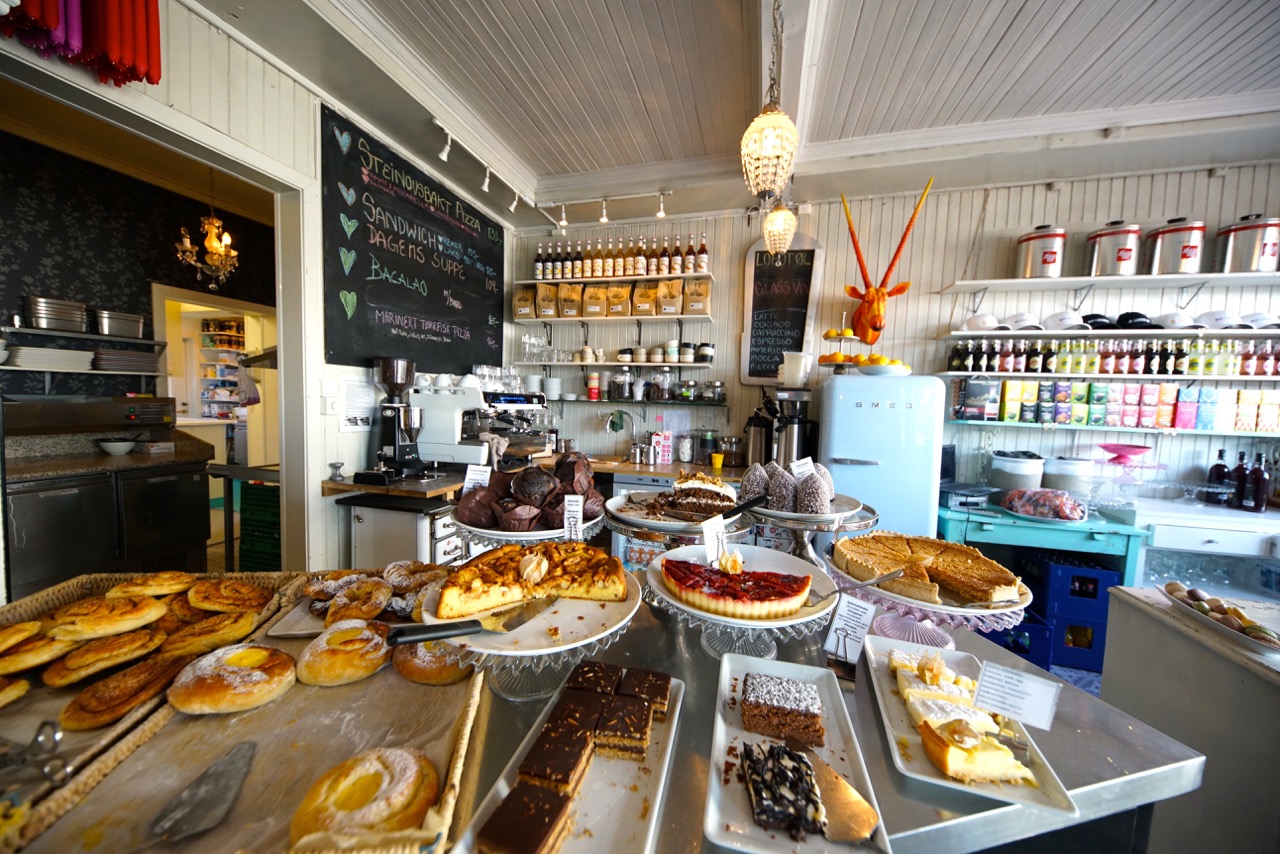 Henningsvær is reachable per boat or over several bridges which are connected to Austvågøya. Due to its fundamental character of a fishing village, Henningsvær is also a hotspot for tourist, climbers and outdoor enthusiasts. But there is one more thing why Henningsvær attracted me so much and that’s the (artificial) soccer lawn, which looks crazy and fantastic from a birds view. I had to wait for the right weather conditions, but then the drone did take off and I placed it 500 meters above my head! Yes, the wind was tricky, but it was worthwhile waiting for!

It is a mixture of general relaxation and the relationship with nature, which can be found and felt all over the Lofoten. Reduced simplicity, down to earth and a fantastic scene for encounters and motion. It was our last day in Henningsvær and this day was also not stingy with incredible impressions. Fall has covered the land with its multiple colors to envelop and protect it. The color RED appeals like a magical potion. 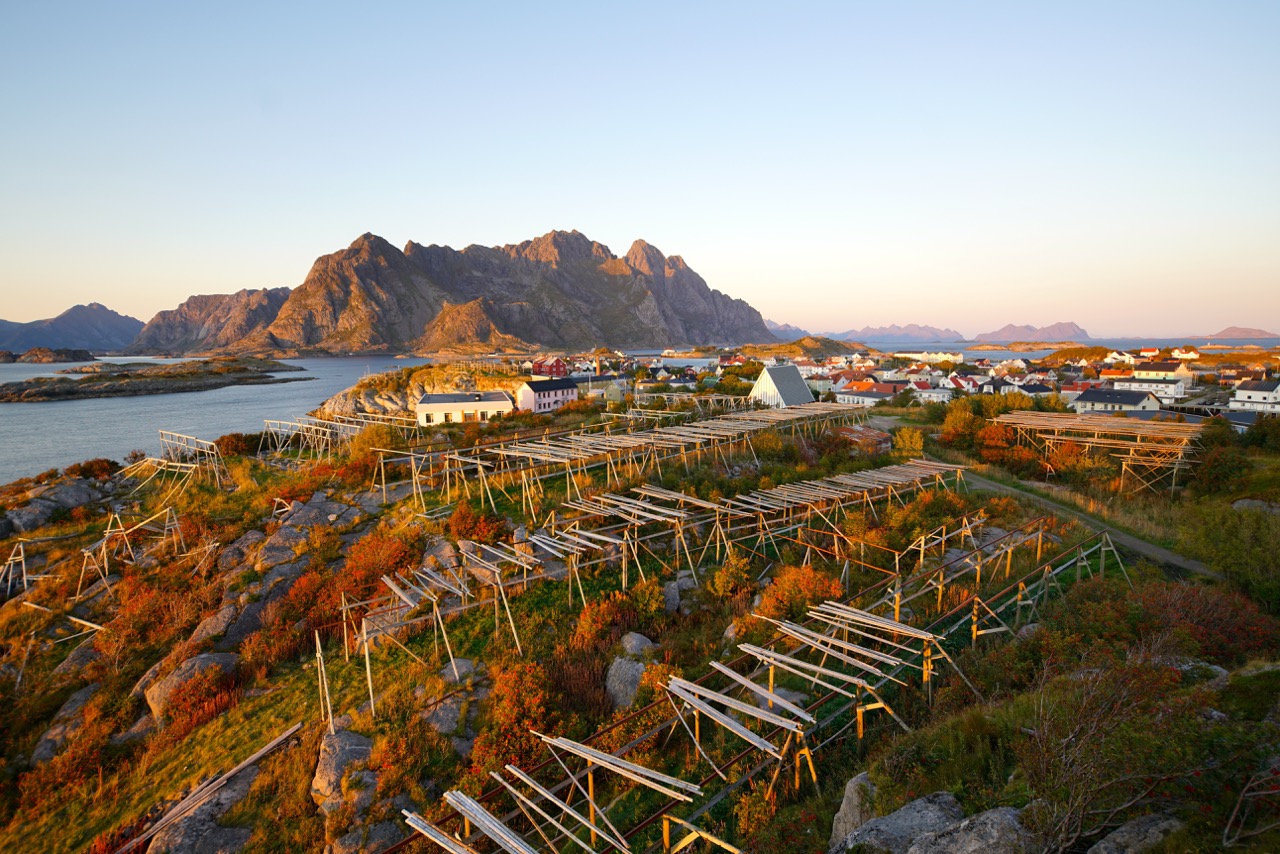 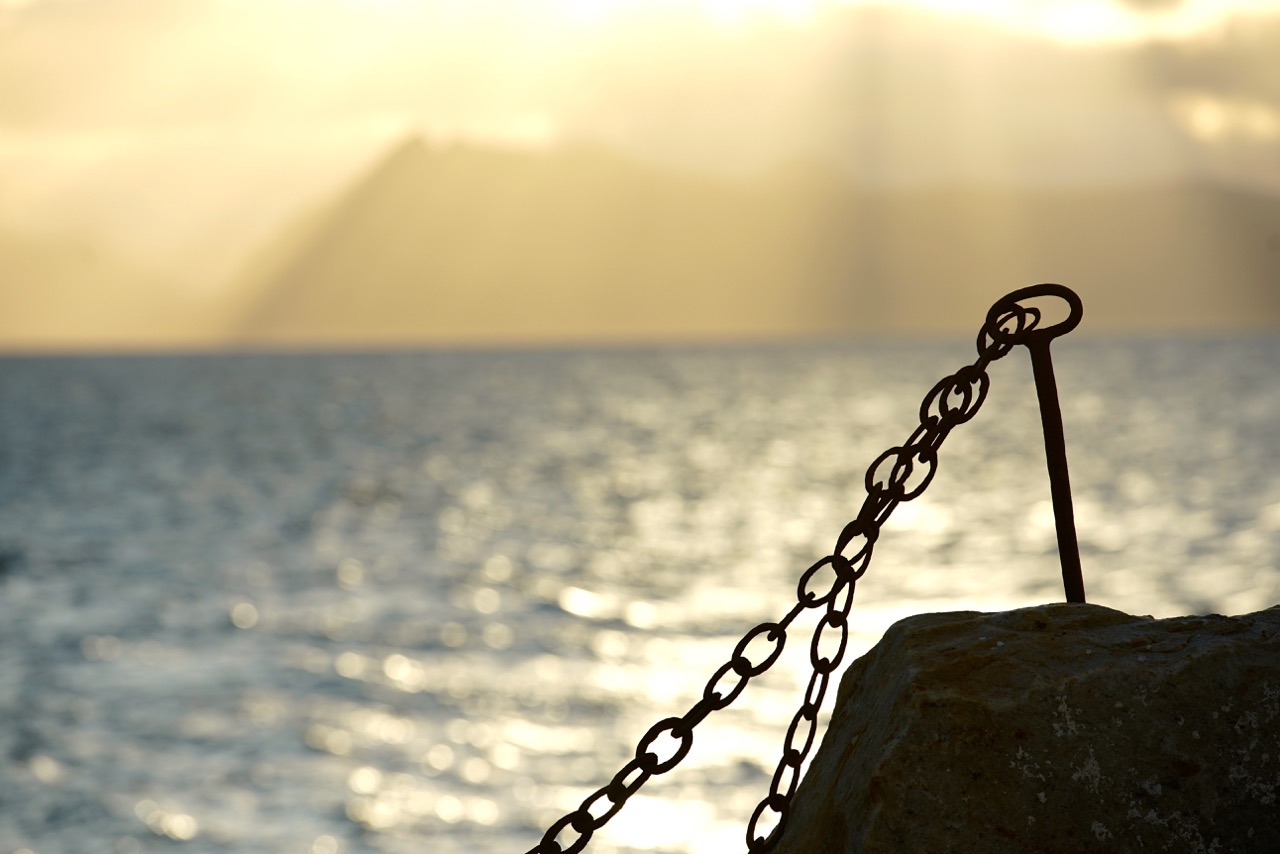 While high winds did sweep through town the temperature dropped and the smell of burned wood made its way through the chimneys. Without a doubt, most of the nights were crystal clear and that meant that the chances are good to see northern lights!  I was freezing several nights but the fascination was overwhelming and I felt blessed by the chances of looking through the keyhole of nature, exploring the sky and the universe within myself. 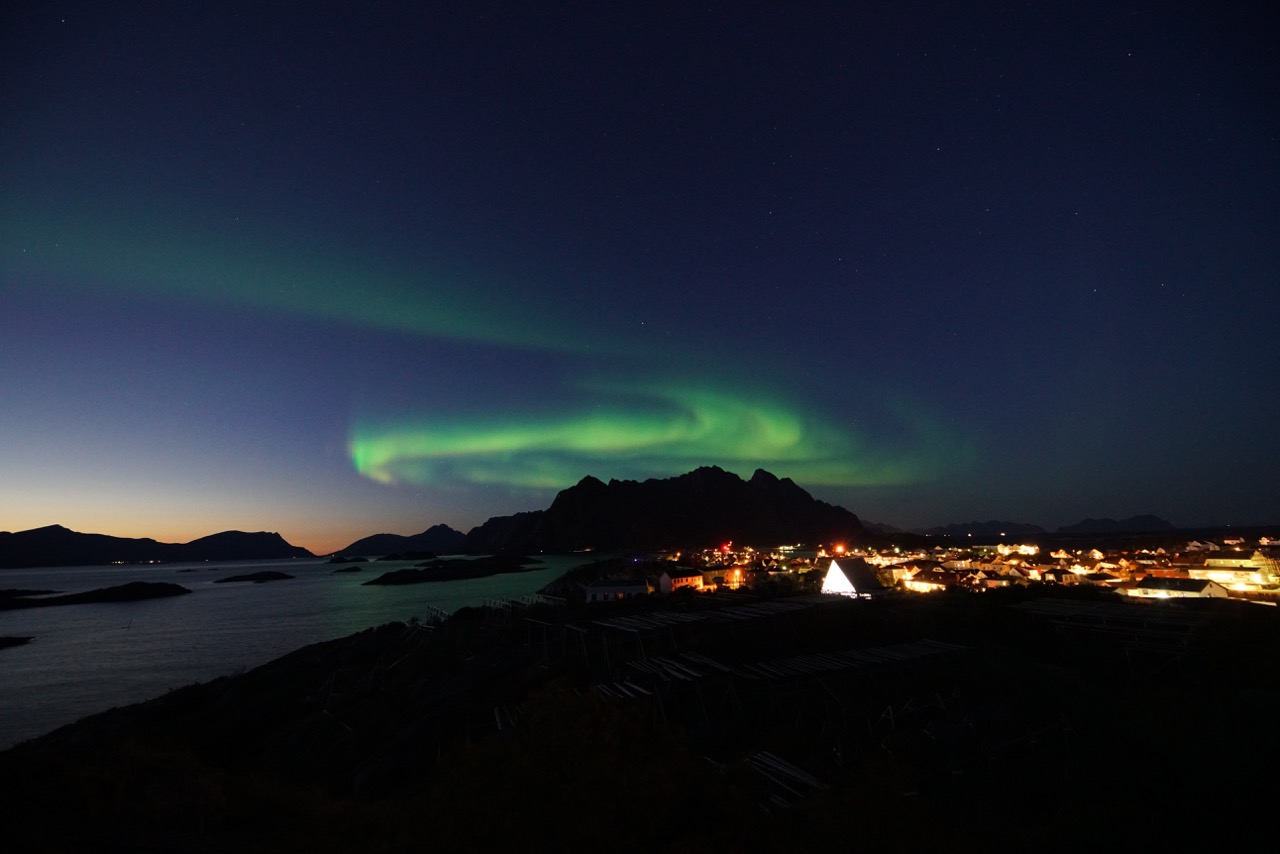 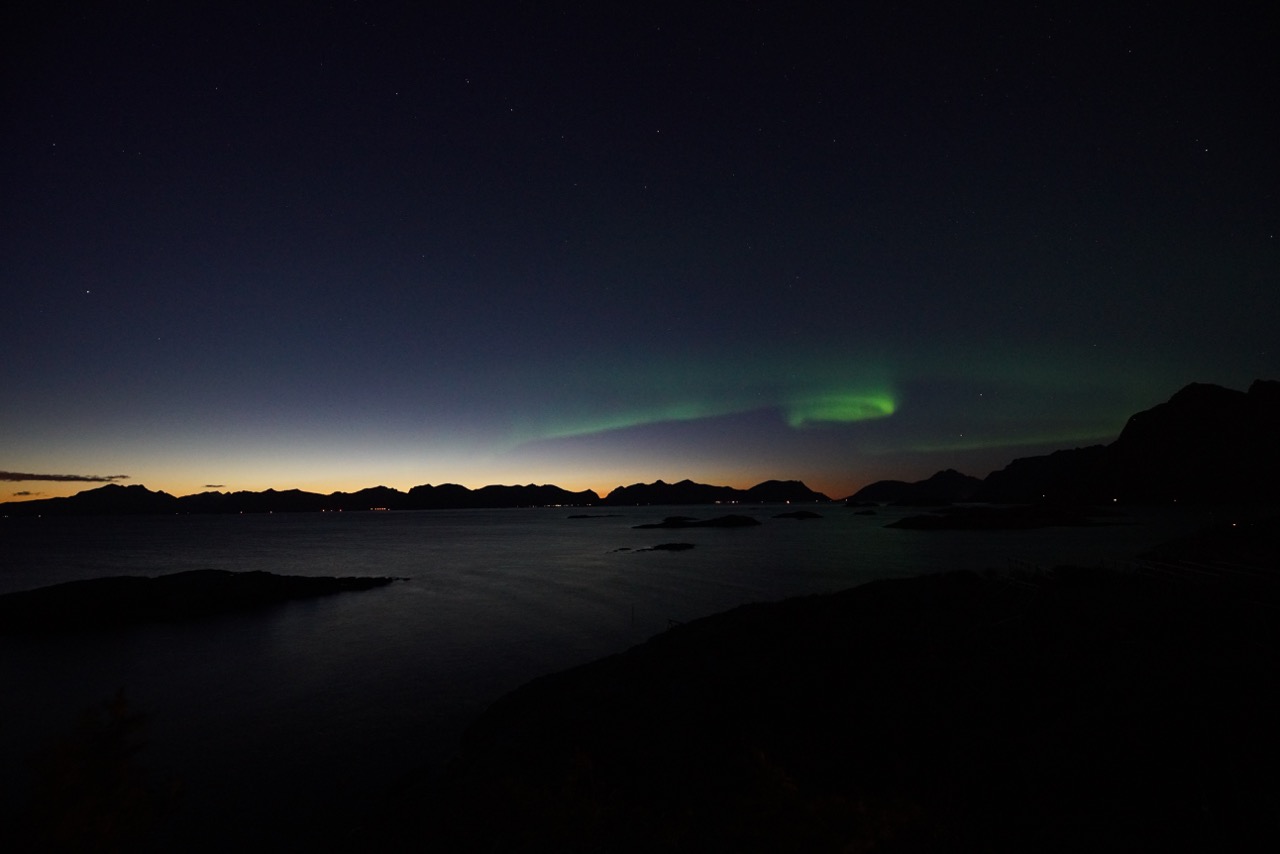 Siargao -Philippines, a paradise and its sweet self-deception

The island of Siargao lies in in the southeastern region of the Philippines and is well known among surfers. Google...