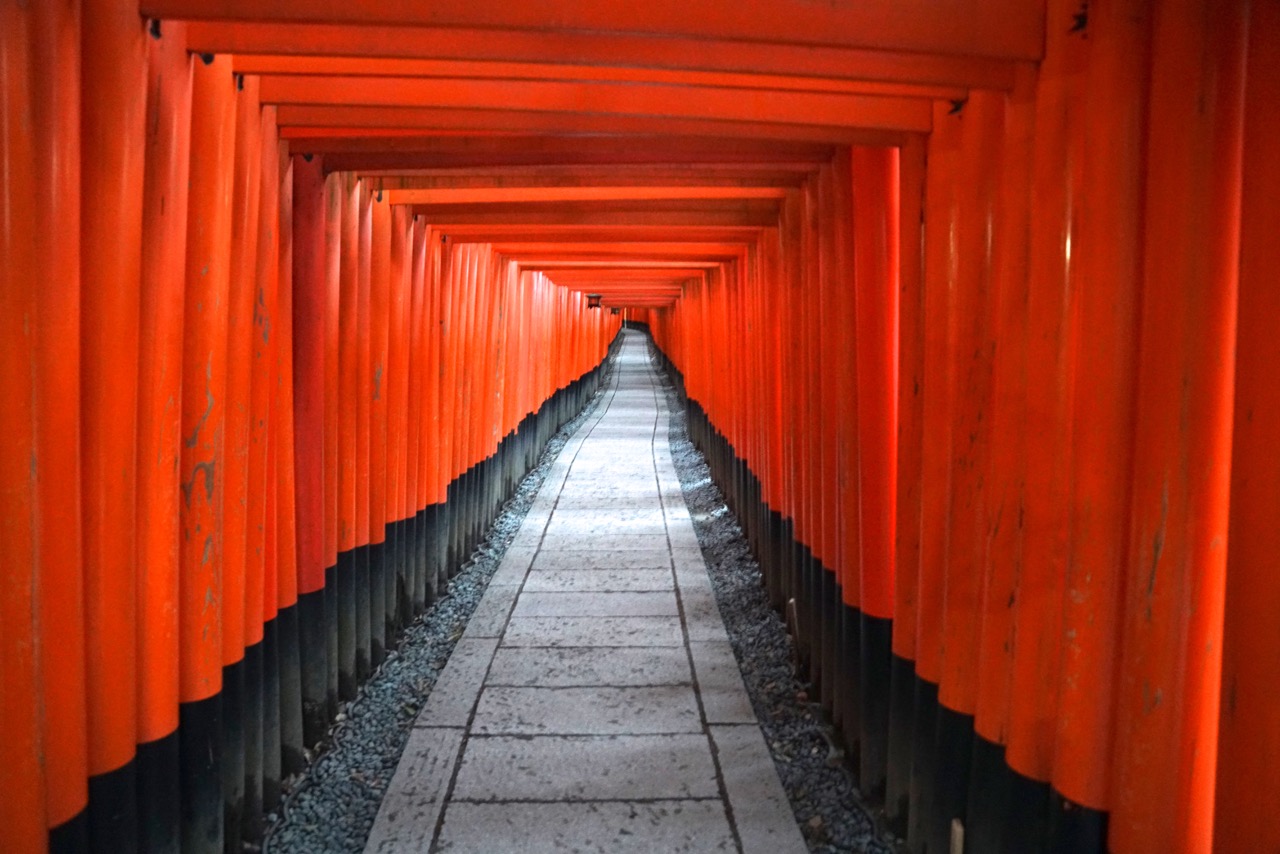 The agreement of the Kyoto-protocol decided on the 11th of December 1997 by the United Nations become effective in February 2015 with the goal of climate protection and to reduce the greenhouse gas emissions within the first declaration of obligation (2008 -2012) by 5.2 % average compare to the quote in 1990. In Paris 2015 and 2016 in Marrakech, they sit down again on the roundtable and the conclusion was: The common will, even from countries with a weak economy.

Traditionally, the home of the Emperor is considered the capital. From 794 through 1868, the Emperor lived in Heian-kyo, modern day Kyoto. After 1868, the seat of the government of Japan and the location of the Emperor’s home was moved to Tokyo. The former center of japans incredible garden art and wooden architecture embodies until today the old Japan.

With a speed of 288 km/h, the train needs roughly 30 minutes from Osaka to Kyoto. The ticket you can easily buy at the counter and if you do not want to make a reservation for a seat it will cost you 1550 YEN (12.80 Euro January 2017). If you want to make sure that you will get a seat you can make the reservation at the same time you buy your ticket and it will cost you around 2800 YEN. The JR (Japanese Railway) station in Kyoto is massive in its dimension and they even have a series of connected escalators there, which cover 45 altitude meters.

Kyoto has an estimated population of about 1.7 million people, is more likely flat but surrounded by hills and mountains. The hiking trails and mountains can easily be reached by the superb public transport system or even by bicycle. On this following map, you find a small overview of the top sightseeing spots and major intersections/ junctions. 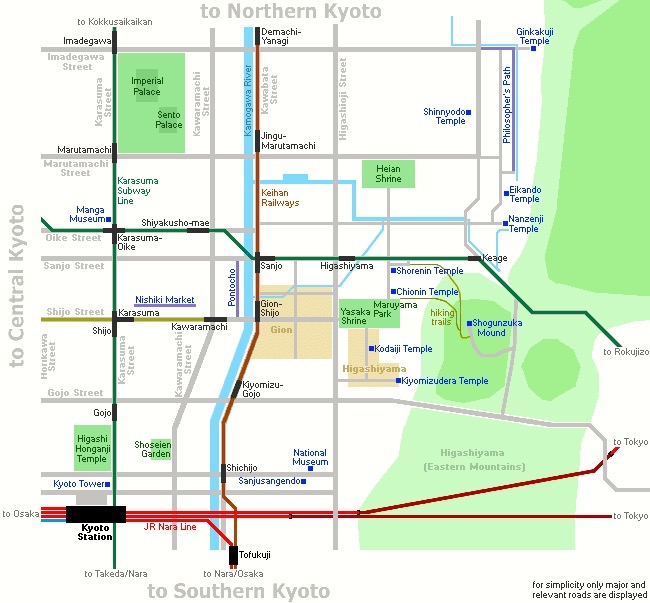 Kyoto offers a huge variety of historical sights and is strategically located at a great spot to reach all other major cities in Japan. What I wanted but missed to write about in the Osaka blog is, that the Japanese people like to smoke, even more, they like to drink and beyond of all that they like to bet on all kinds of things (and lose). Did you ever hear how Japanese people slurp their soups? If so I have nothing to tell you but if you have not experienced it yet… they are really loud whilst slurping their soups, like Chinese people. But in spitting the Chinese are number one, followed by the Japanese second in place!

In terms of Kyoto top sights, I found my personal favorite quite fast and it is the Fushimi Inari Shrine. This place and with the impressive orange columns is spectacular in many ways. The place has a simplicity shine and special charisma, which impressed me a lot. A must-have for everybody who is into religion, photography, architecture, culture etc. Because of this charisma, it draws a lot of attention and with it follows a massive amount of visitors. After my first visit, I returned early next morning and when I arrived at 06:30 am, there was, besides view monks, nobody there. Give yourself about 45 minutes time if you want to walk up to the summit and at this time you do not need to rush so you can take your pictures whilst enjoying the silence and pretty setting of this old shrine.

On the train ride from Osaka to Kyoto, I was so lucky to get in touch with a young and ‘just married’ Chinese couple, which choose Japan as part of their honeymoon destination. Leon, the young groom was cleaning parts of his camera equipment so I took the chance to start the conversation. The right issue, lucky me. I told him from my naive and ridiculous inquiry to organize a photo shooting with a traditional Geisha, Maiko or Geiko, which I totally underestimated in terms of the needed budget for such idea. Here you will find out more about the difference between Maiko and Geiko:  kimonogeisha.com If your budget is not tight check kyoto-geisha-tours but you can roughly calculate US$ 1000 for a traditional three-hour Geisha entertainment which is singing, dancing and having dinner with the Geisha (drinks and food are extra).

Back on the train: Mister L. Wang laughs about my story and invited me to meet next day at the Fushimi Inari Temple where we could do a photo shooting together. Next day they arrived and his wife was dressed up beautifully for the following shooting and that is how I was able to take those photographs.

Like in Osaka, I did book a Hostel in advance, which lays close to the massive train station so it is very convenient and easy to reach. The LE9 = Lower East 9 Hostel – Kyoto is a great Hostel and all of you know this feeling when you get to a new place and as soon as you get in you feel like home. It does not happen very often but at the LE9 I felt it right away and this feeling stayed until I left. It is a great concept, well thought out, optimized and with helpful and friendly staff at all times. Do offer a small kitchen as well as a few simple dishes, a lounge and bar and by far the best coffee I had so far in Japan.

Kyoto is split into a view quarters but they are very well connected to each other and easy to reach by the public transport system so you will not find any difficulties to reach the top sights. The magazine ‘Explorer Kyoto’ you will find everywhere and it is a good signpost, which will keep you busy for several days. I stayed four days in Kyoto and like most places, I rented a bicycle for a day. The tour on the bike took me to the impressive Sanjusangendo Temple famous for its 1001 Kannon statues, the goddess of forgiveness.

The Kyotos bamboo forest is easy to reach with the local train and takes about 20 minutes from the JR station. The area is called Arashiyama like one of the temples there and it is a nice way to escape the lively city. Here you can stroll around along the river, see the sights and get a glimpse of the (fenced) bamboo forest. The bamboo forest is advertised allot and yes it is ‘nice’ but do not expect too much because it is just a tiny area and definitely not as big as the marketing about it. If you have enough time just leave the main streets and you will find yourself in a way more typical Japanese village. 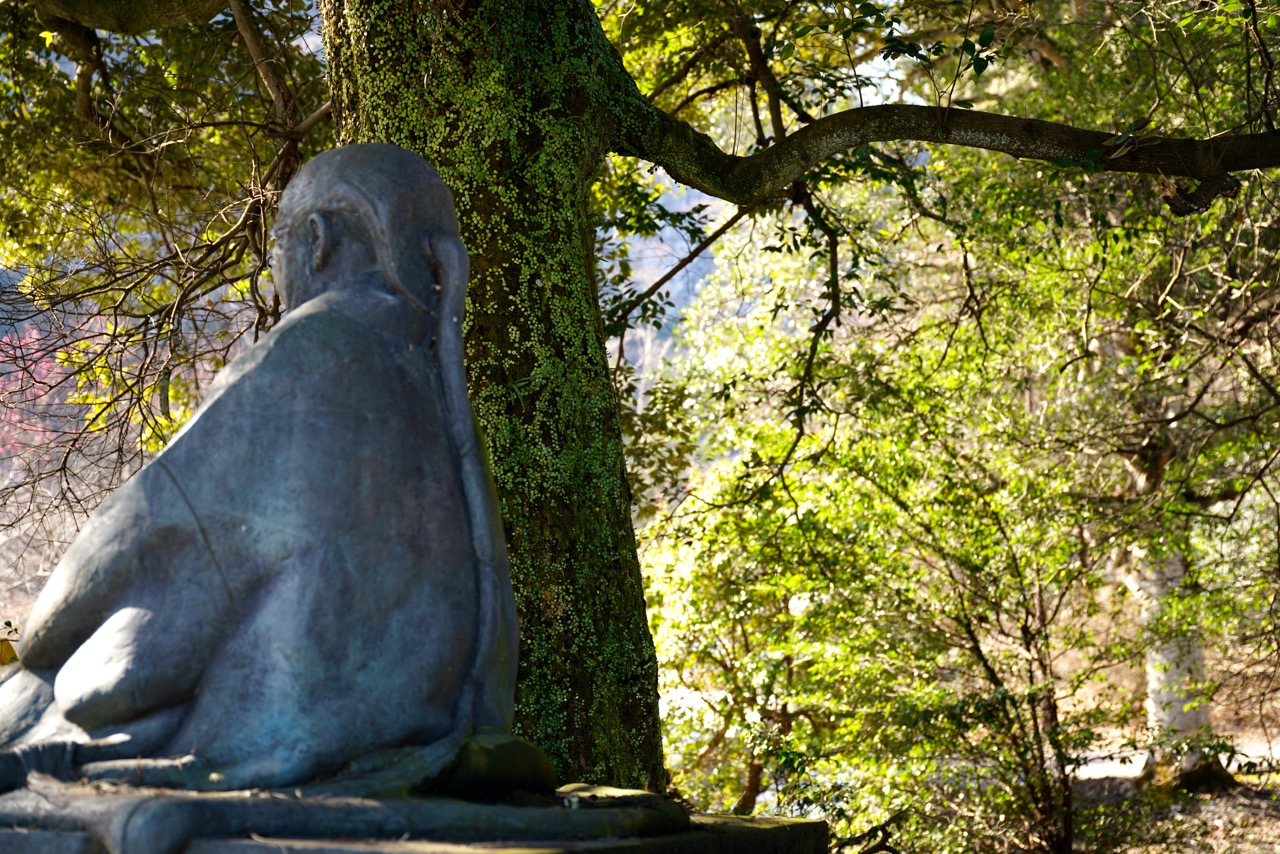 After all those sights and hikes and back in Kyoto you can close the day off with great food at the Nishiki Market where you will find a great variety of traditional Japanese dishes. After four days it was time for me to move on but before I left with the train to Nara I visited the Ninna-ji Temple with its five stories tall Pagoda. 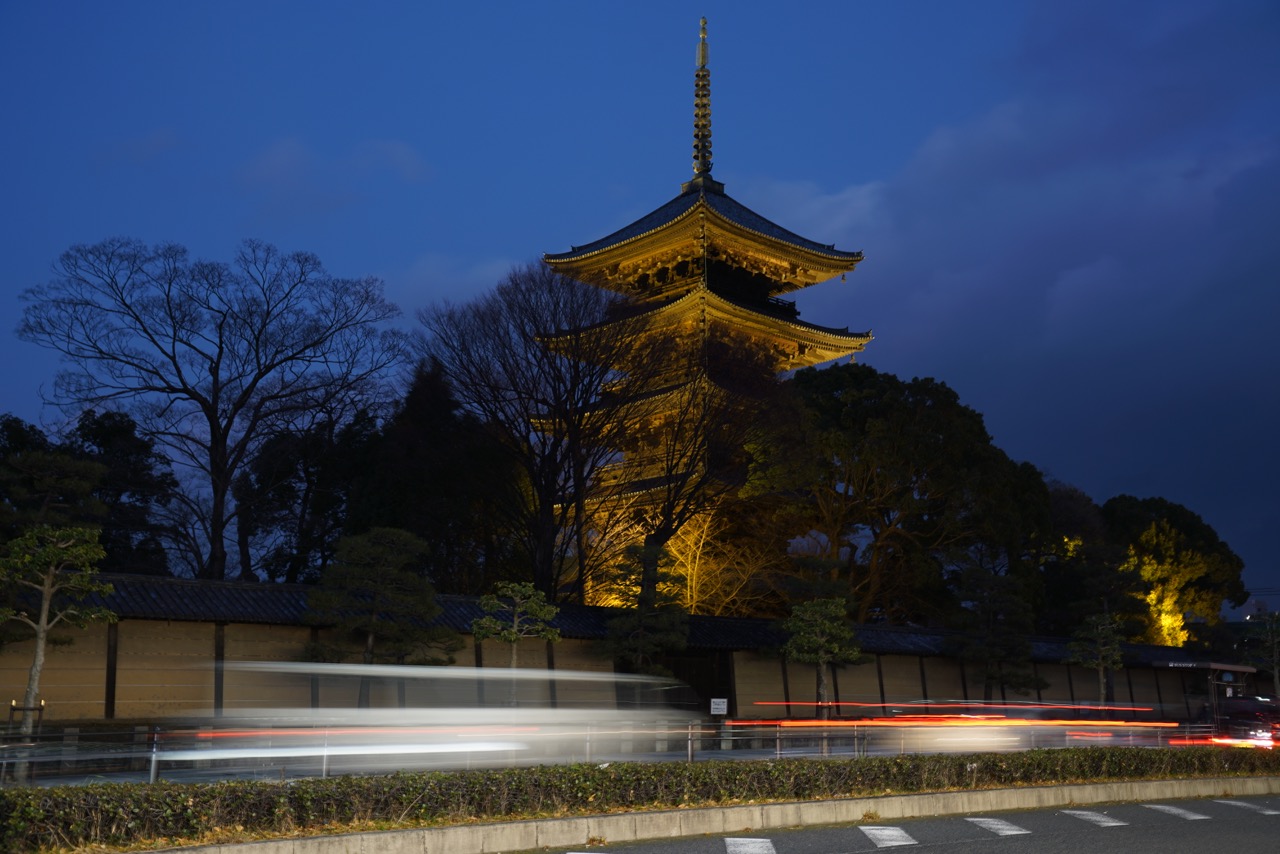 Japans Phenomenon: Inemuri, a short nap like in the subway, or whilst the public event is another phenomenon. The Japanese are not getting enough sleep, this is the result of a scientific research of the OECD, two years ago in which (after a compression) only the South Korean are getting less sleep then the Japanese. Sleeping_while_on_duty is very common and 2007 a research showed that 28.4 % of the asked people slept daily less than six hours, recent studies showed a significant rise up to 39.5 %. 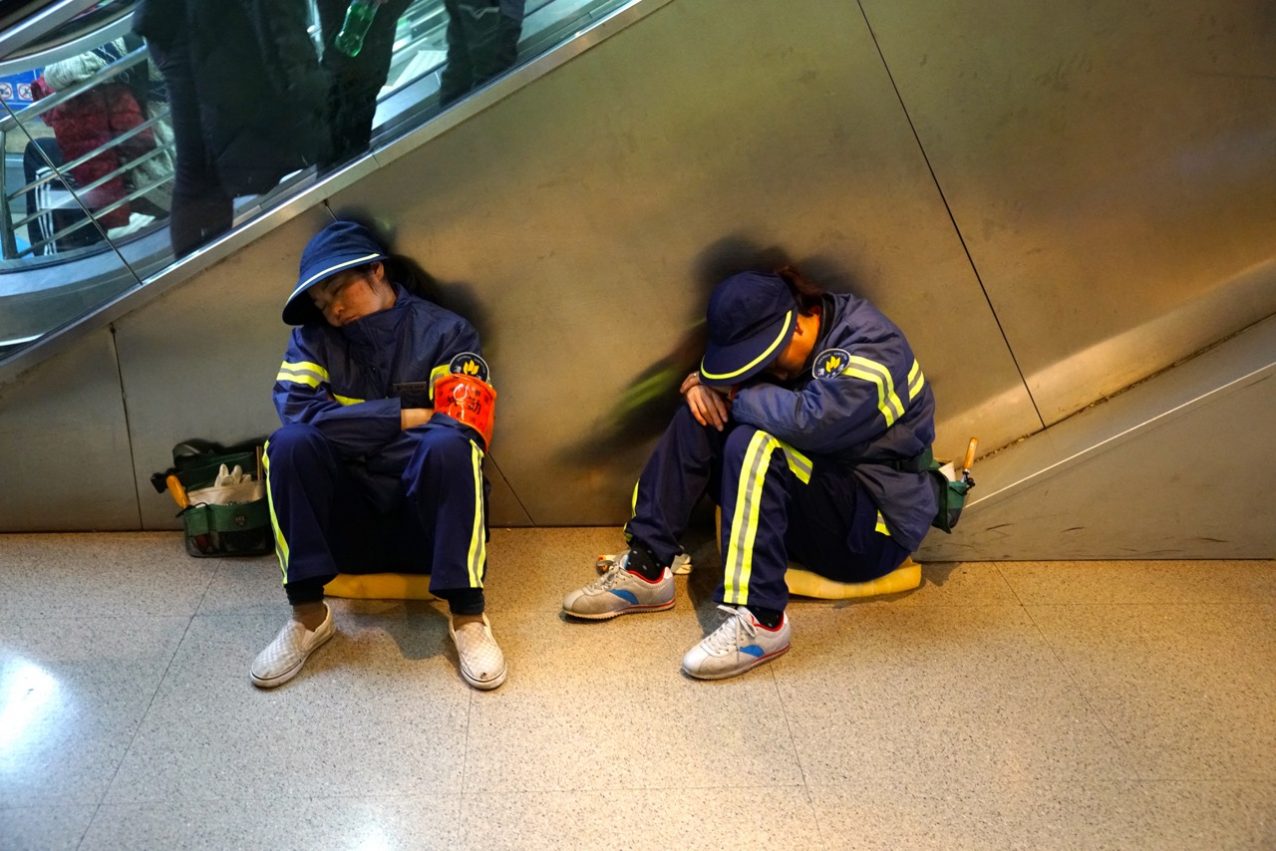 My time here in Kyoto is over but I wanted to share another reason with you while traveling is so educational to me. It is because I like to drop myself right into the environment that surrounds me and like home, I buy the daily newspaper, do lots of research, talk to the locals and to the People I am running into whilst traveling. The short time in Kyoto showed me again the richness of diversity what Japan has to offer and reminded me that each of us is living in its one microcosm. Those (travel) experiences are signposts like parts of a puzzle, which allow us to see and understand the coherence of to get a glimpse of the big picture.

If you think the ice age is confined to the poles (or ice cream parlors), you’re wrong! Here’s an...