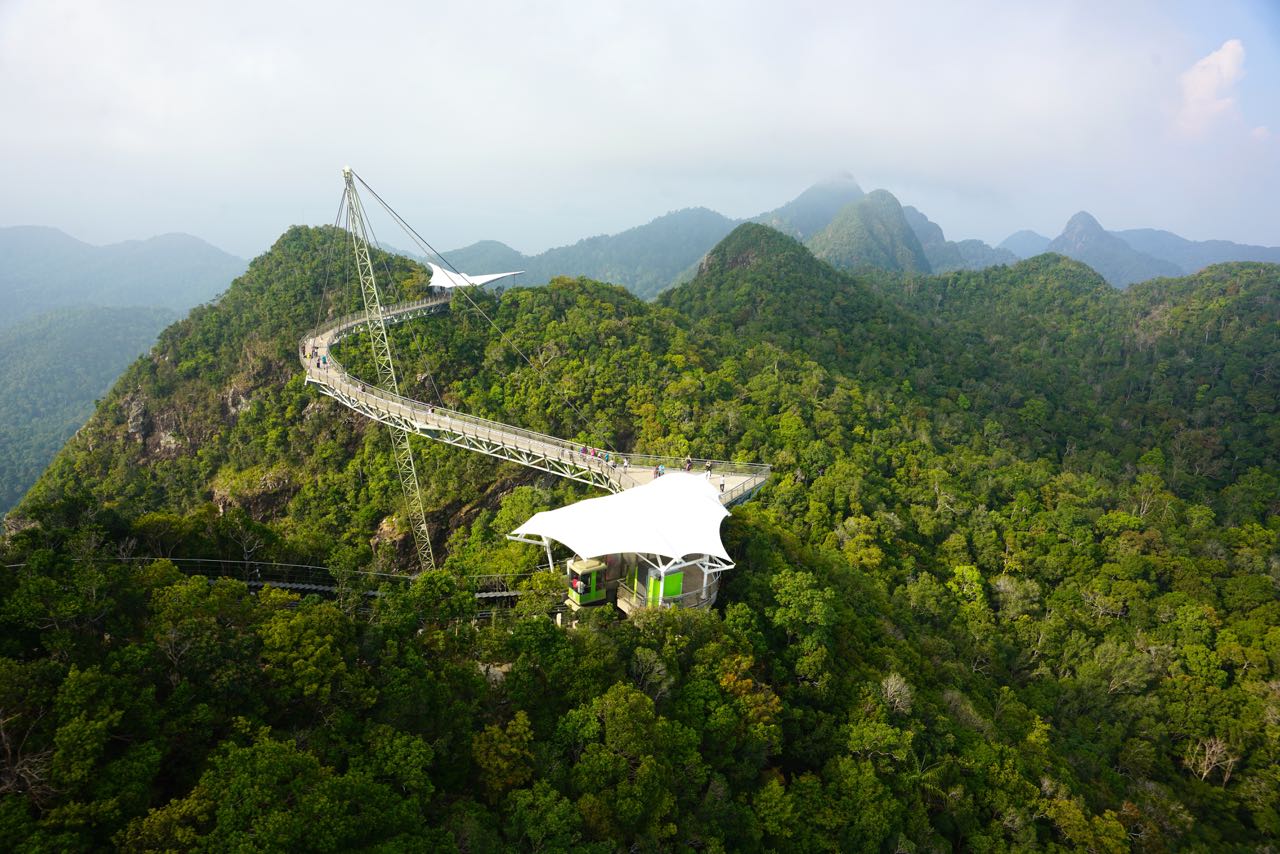 Langkawi is a group of islands on the northwest coast of Malaysia. The archipelago consists of the main island  Langkawi and around 100 more small islands, all part of the Andaman Sea , where the Strait of Malacca connects with the South China Sea. Just a few kilometers apart and to the north, you can find the island of Ko Tarutao which is already part of Thailand. Langkawi is a famous vacation destination close to the Thai border and the diversified landscape is characterized by dense jungle vegetation, mangrove forests, mountain ranges, cliff and boulder formations, great beaches and a fascinating underwater world. Langkawi is like Labuan or Brunei a free trade zone and while the economy on the coast is based on tourism, the inner part of the island is still agricultural.

Langkawi – map … the smaller islands around Langkawi are still quite untouched and only the main island seems to attract with its good infrastructure, excellent hotels, and scenic beaches. Langkawi’s biggest village is Kuah and that’s the place for all shopping lovers! Already since 1987 Langkawi is a Duty-Free-Zone and therefore many tourist and locals are coming shopping, while RM – Ringgit is the national currency in Malaysia. The citizens are manly Malayan, Indians, Thai and Chinese people….. and the majority are living a strict Muslim life (see Malaysia Blog I). 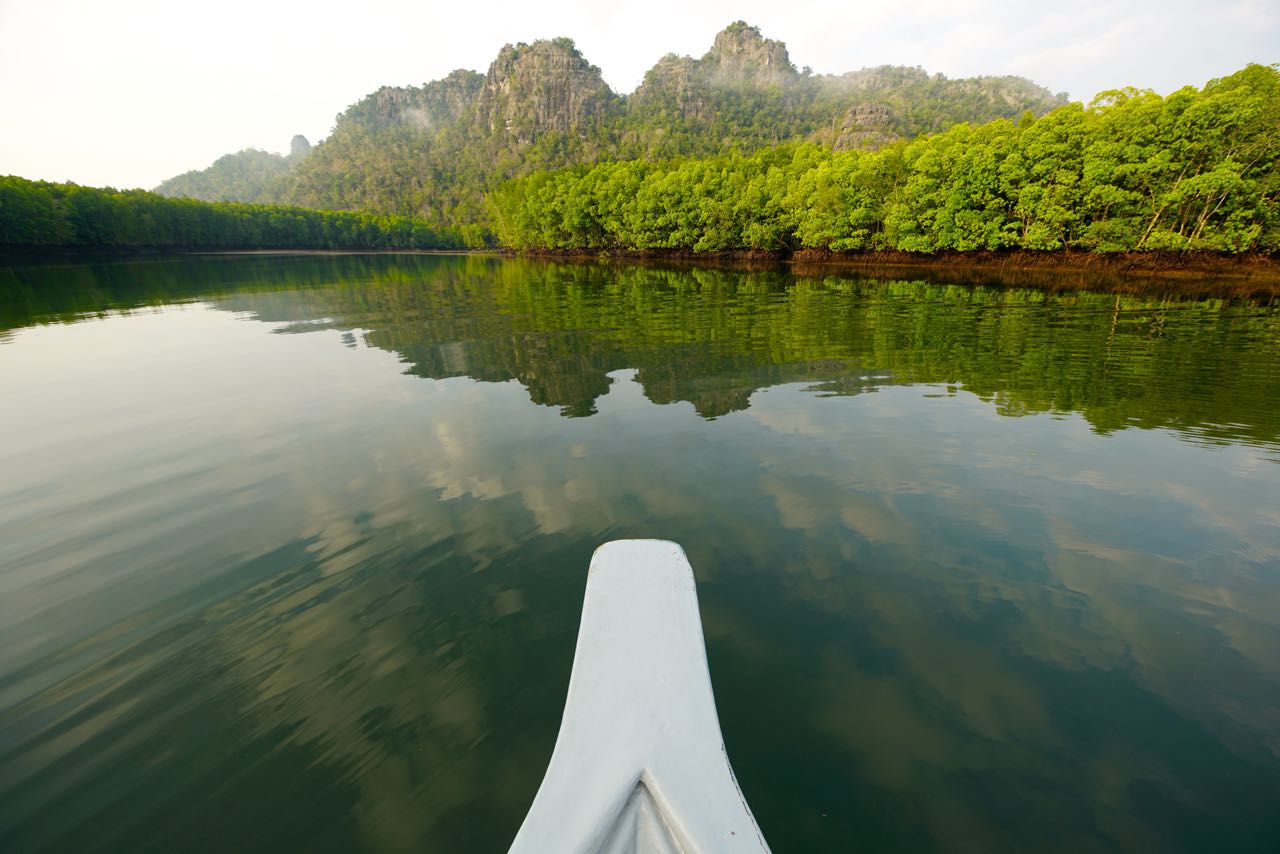 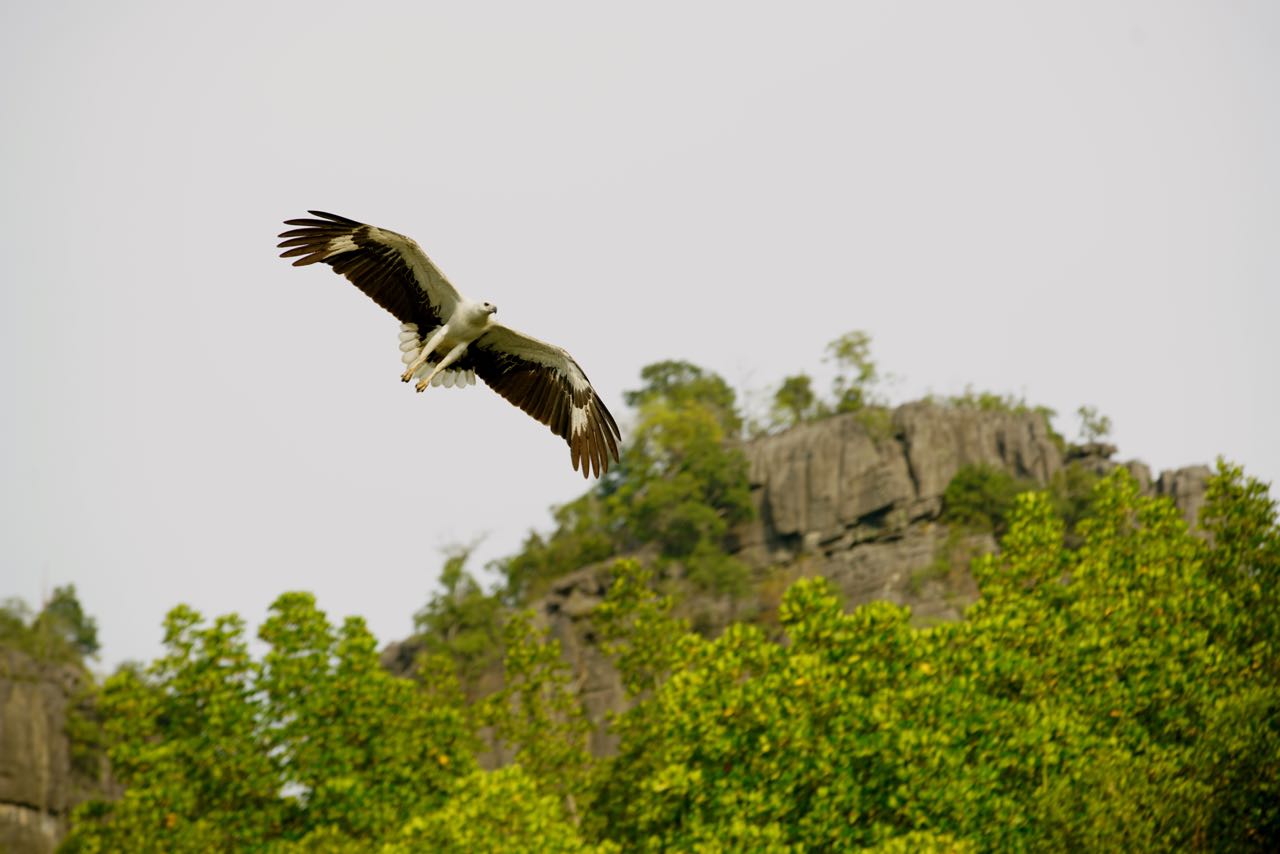 Eagles are usually lazy hunters unless there is enough wind….or they get fed by locals with chicken skin to add some more action for the tourists while they are on the river tour. That is exactly what is been done, every day and for years! Of course, it is changing the habit of the eagles and it is the bequest to the next generations. Now, after five years of feeding, the first problems arise. Some of the young eagles are focused so much on the fed chicken skin that they do not hunt anymore! Two times I did charter a private boat for taking pictures at the river and at the ocean and booth times they wanted me to buy the chicken skin from them for the Eagles, which I refused. The following video may convey perfect idyll and YES it is possible to experience that but therefore you need to charter a private boat and leave early morning.

Make sure you book a river tour which also takes you to the Strait of Malacca which is defiantly worthwhile seeing. On the way to the open ocean, you pass by same small floating villages, fishing boats and step wooded islands.

All following pics and videos are taken with the dji mavic drone which is always in my camera backpack. The small size of the drone makes it possible but even most of when the time the weather is ‘not ideal’ I fly anyway and then I am always deeply touched by the results (and that I was able to land it safely). 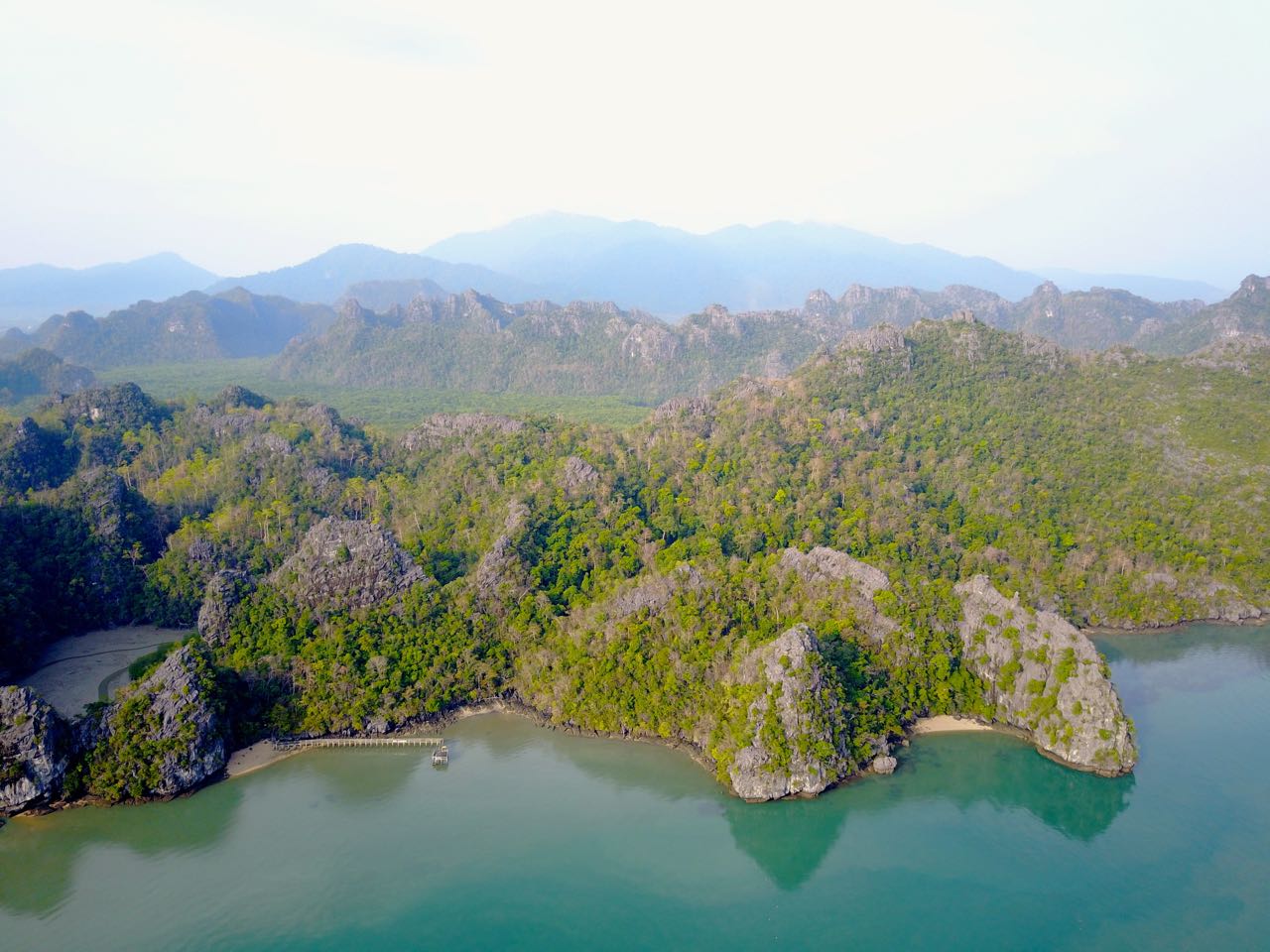 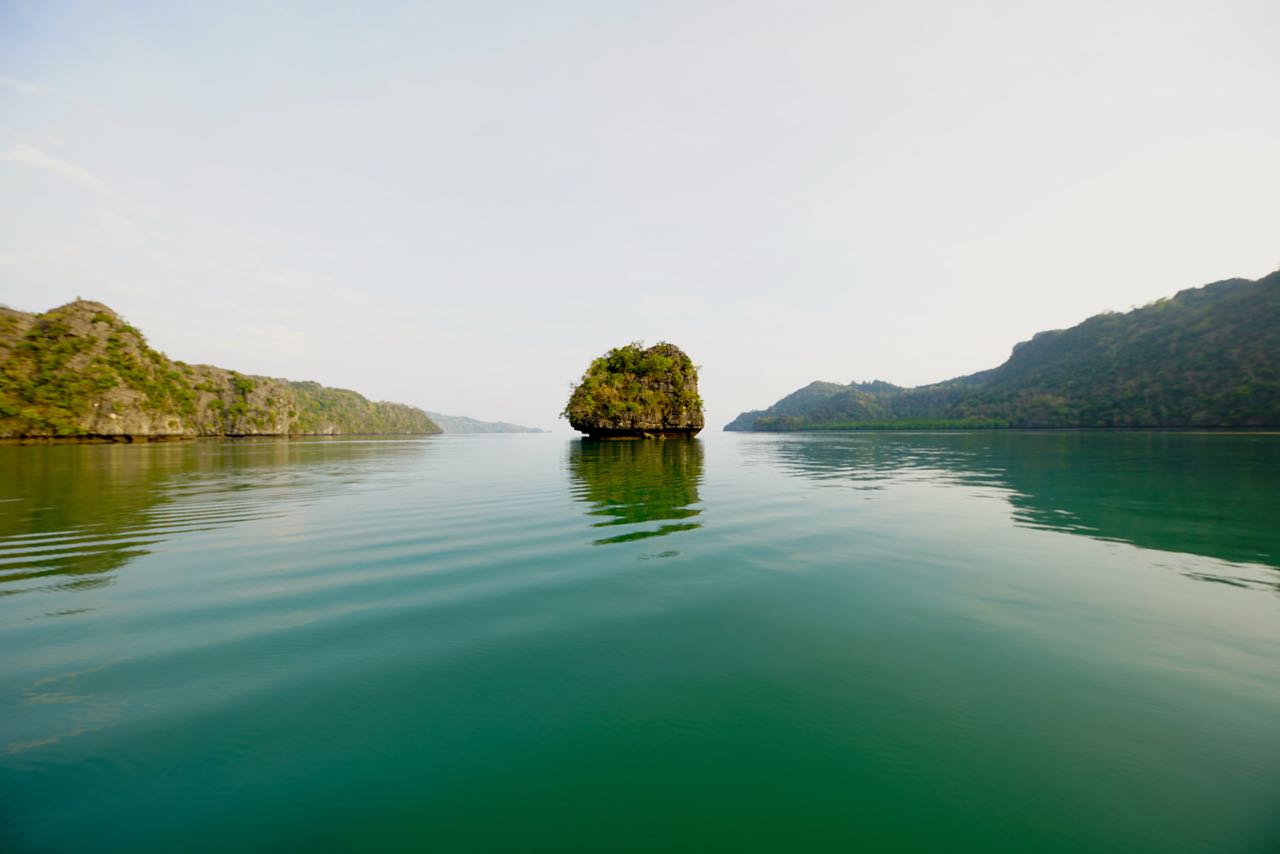 The Kilim Karst Geoforest Park is great without a doubt but it also has many DRAWBACKS which I like to point out here. With this beauty around you can easily blind yourself but I started to take closer looks and even deeper research before I trust the glance. Grievances are closer than we often think and for this story, pics and videos I got insulted and threatened.

And right here I use the ‘red pencil’ to show you some of the grievances of the Kilim Karst Geoforest Park. I really do hope that the UNESCO is not just putting ‘names & places’ on the list without observing, escorting and examine them over and over again. Without a doubt… it’s missing here !!!

Both localities seen on the video ‘Two sides of the same coin’ are not more than 500 meters beeline apart! A green dense wall of trees and bushes are protecting to sight to the massive garbage dump.

Enough of the negative aspects, let’s move on to some breathtaking sights here…. like the fascinating architecture of the Langkawi Sky Bridge which is located in the northwestern part of the island. The step ride with the cable care takes your breath away in many ways and after 15 minutes you reach the second highest mountain of the island,  Mount Mat Cincang  (705 meters). With 125 meters the Sky Bridge is one of the longest (bent) pedestrian bridges in the world, while the whole bridge is held by only one mast (82 meters). From this spectacular bridge you have, if it is not hazy, an immense view of the Andaman Sea 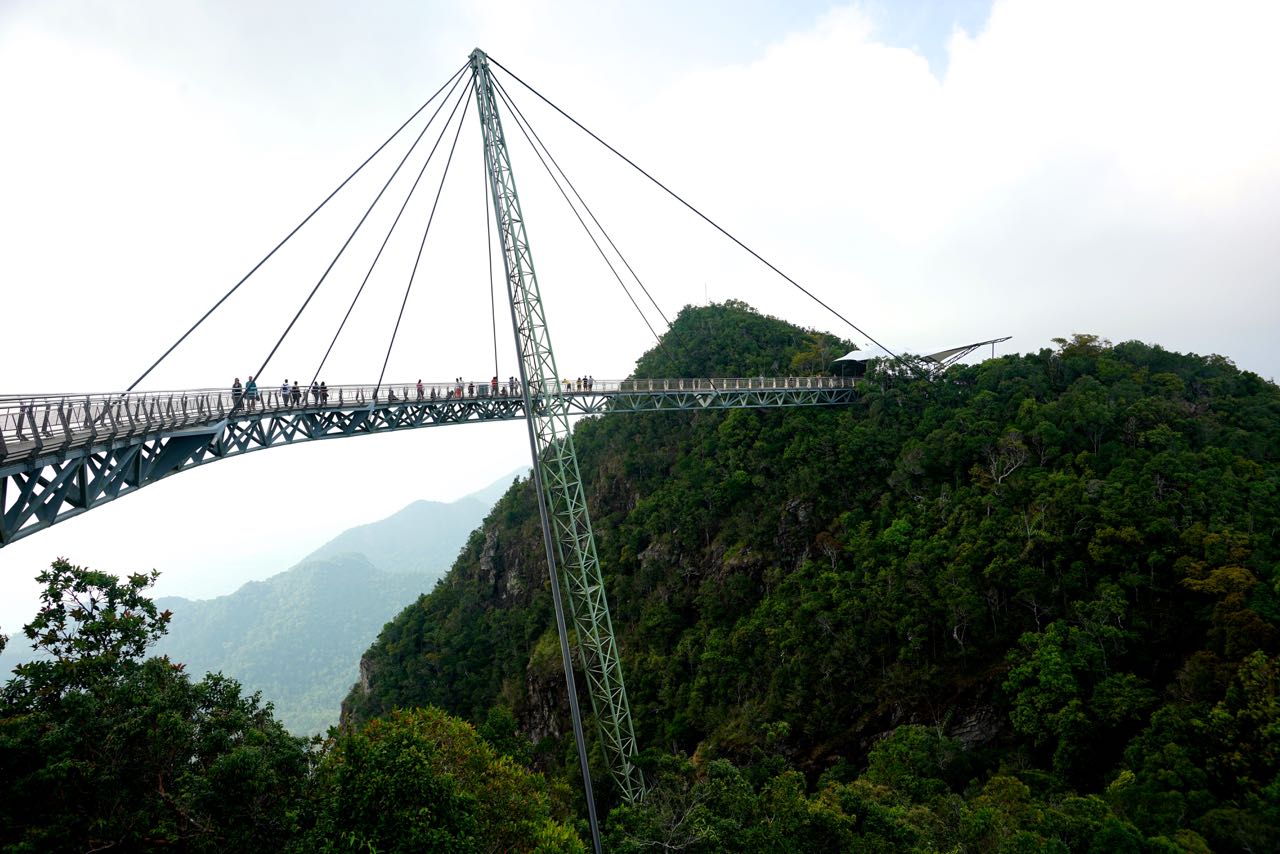 Here is the Sky Bridge – Langkawi – Map by Google Maps and I like to mention that it is always busy at the cable car, especially on the weekends and/or on public holidays (that can really spoil your day). Because of the attraction you will find all kinds of hotels around and close by the Sky Bridge (mostly expensive once) as well as all ‘regular’ touristic facilities needed. For those of you who liked it quieter and a bit of solitude, I can recommend a walk (or hike) to the nearby Telaga Tujuh Waterfall (Seven Wells). And that’s how you find them… Map- Telaga Tujuh Waterfall .

The waterfall is close by to the Sky Bridge and the Oriental Village from where a short road takes you to the parking area (don’t forget your water bottle). Right from the parking lot you follow a stepped road and after 20 minutes you reach the lower part of the falls. Most people are satisfied staying here BUT… I highly recommend walking another 15 minutes to the top (see the pic with the orange bridge). It is defiantly quieter up there and the sight is breathtaking. If you happen to hike up there between the end of December and the beginning of April do not get disappointed because at that time of the year you might just get to see a trickle of water instead of the expected waterfall. I loved it anyway!

At the upper part of the Telaga Tujuh Waterfall, you will see a trekking path which leads through dense jungle to the top of Mount Cincang. The path is well marked but to hire a local guide is recommended (which I did not listen to). However… one thing you have to do and that is to sign in for your hike at the Telaga Tujuh Information Centre. There are lots of great motives for photography like monkeys and insects.

My favorite place is without any doubt is the upper part of the Telaga Tujuh Waterfall. With a book in my (camera) backpack, it is an easy target to hang out here for several hours in the shade of the jungle. Enjoying the rock formations and the sight towards the ocean really slows me down and I feel tranquil. I did spend 17 days in Malaysia and it will take some time to digest the enormous amount of impressions at this time. But right now where most of the people are down at the beach I enjoy my last hours here at Langkawi by splashing around at the cooling freshwater pools of Telaga Tujuh Waterfall.

After 80 days around the world… I landed in Muscat, the capital city of the Sultanate of Oman. For this last...