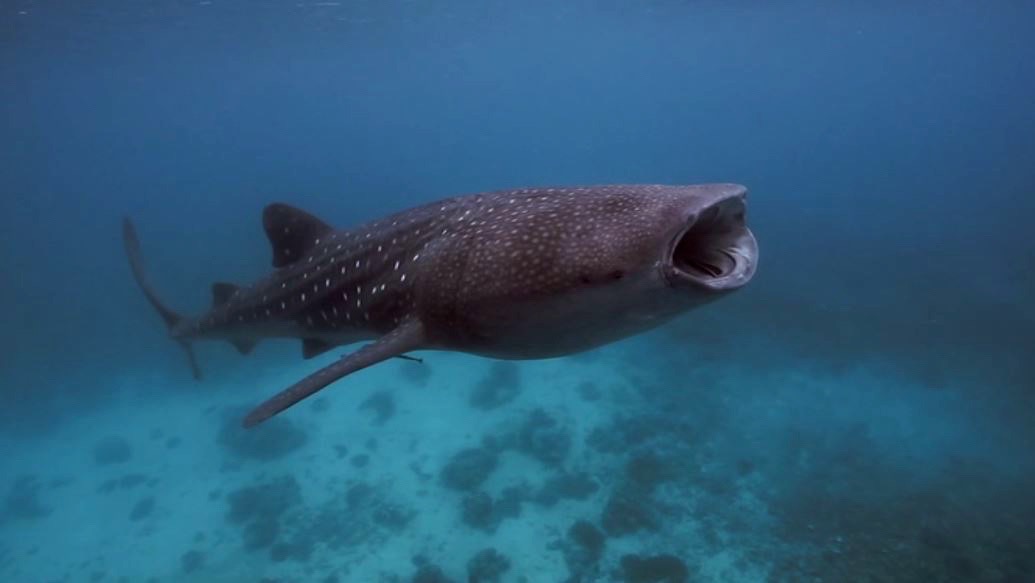 The ocean is rough, unpredictable and without compromises and I can feel how my grip on the railing is getting tighter while I lower my head towards the neck. My nose is pointing to the clouded sky, unconscious like if I would like to see, taste, touch, smell and listen to it at the same time. The wings of my nose are as wide as the ocean which surrounds me and the boat vanishes with my thoughts. And then….one distinct loud shout which stroke me like a harpoon:  WHALE SHARK 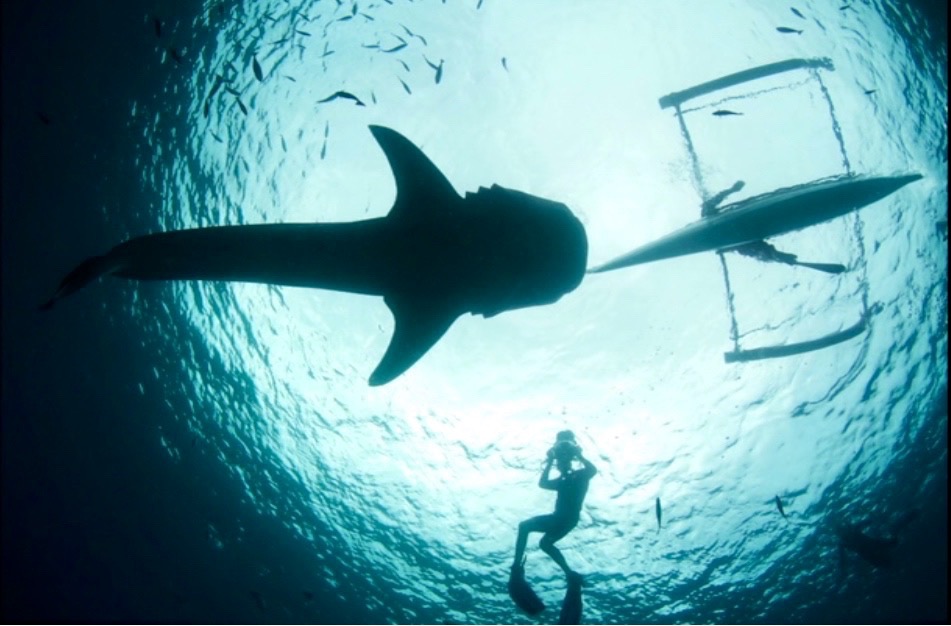 Instantly all thoughts, memories, hopes, expectations and needed handholds are clearly present. The gear for diving feels like a tight corset and while I am lost in contemplation I sink deeper and deeper into this blue universe. Weightless, zero-g. But where do I dive into? Diving into one of this seldom situations where the moment of surprise takes over the (believed) self-control. Real strange that we think we control our lives.

To use a snorkel you have to widely open your mouth but even that will drop out again by your first encounter with a whale shark. With my eyes and mouth wide open (which immediately fills with salt water) I freeze at the moment. Freeze… because of the whale shark encounter. The whale shark, the biggest fish on earth, which glides majestically and soundless in his elegance next to me. Amazement pure. All thoughts have vanished thanks to the evolution and so I drift in this oceanic silence, subjected to my biological system. Here and now, deep and blue. There is nothing to do so I observe the moment of being engrossed by its dimension and with the increasing amazement, the ego shrinks. How can you measure such experience which leaves you breathless in its unique encounter? You can’t.

Seeing whale sharks will be remembered a lifetime and the encounter sticks to you like a sweet kiss. You feel blessed. I did see whale sharks several times before when I was diving in Belize but on this trip, I knew that there are in OSLOB, a small village southwest of Cebu -Philippines. In Oslob, they started 2008 to chum for the whale sharks for commercial use and since 2011 the business with whale shark snorkeling and whale shark diving is booming in such way that they have real troubles controlling it. The needed infrastructure is of course way behind even the make MILLIONS there, NO PESOS…… EURO !!! Depending on the weather, but actually more on the season, you can find there up to 1500 tourist per day! Most of the tourists are coming by buses and this is organized tours which bring ‘shiploads’ of South Korean, Japanese and Chinese costumes to the scene. 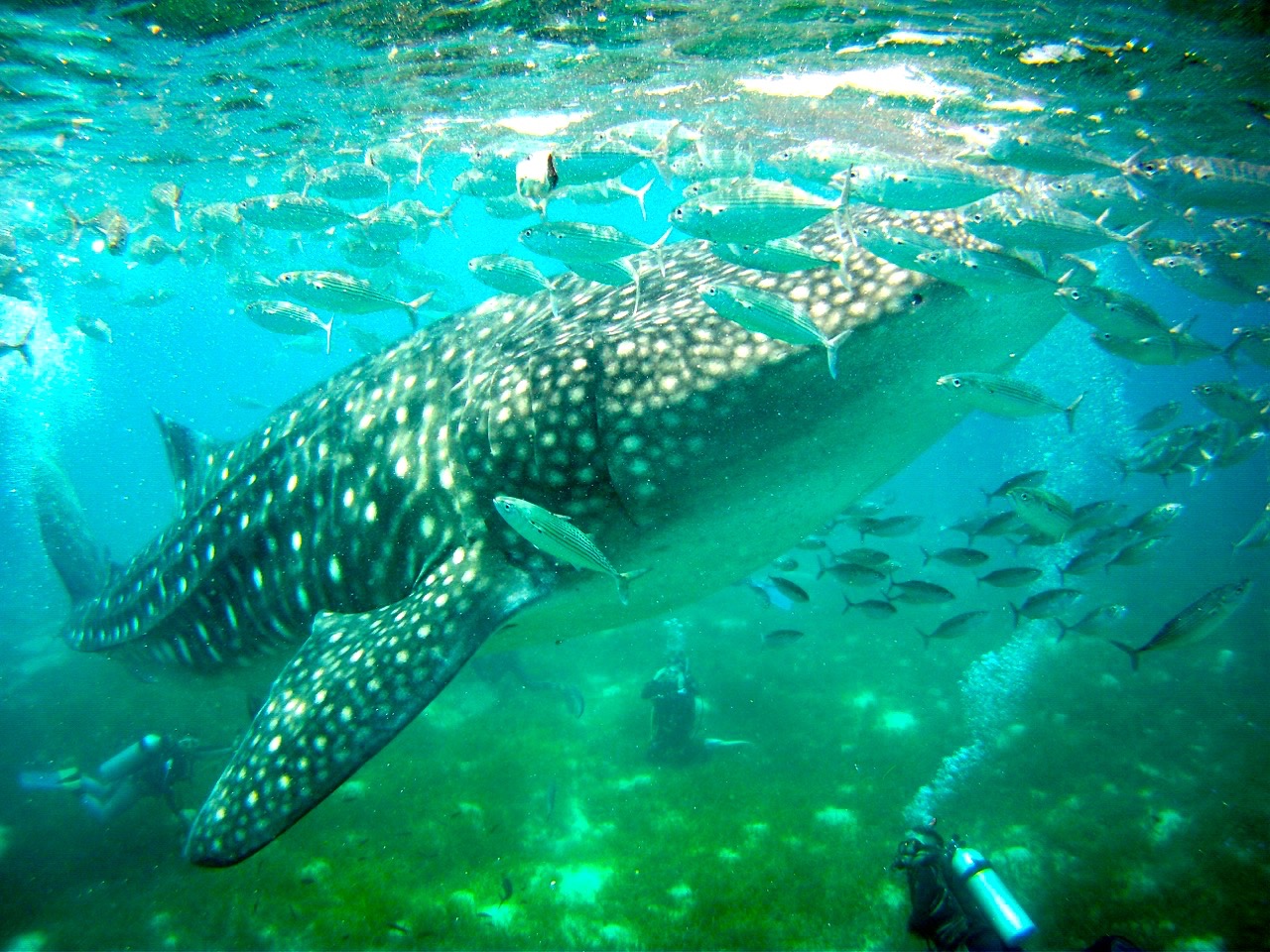 There is no doubt that attraction like this has quite a drawback and it is up to one’s discretion to judge it. I went there every morning around 6 am for five days in a row, trying to get an objective overview so I can show two sides of the same coin. I also did some interviews but my presence was not really tolerated. Wonder why ?!!

The ownership of the organization splits into two parts, one is the government which holds (takes) 40 % and the other 60 % belong to a local association. Meanwhile, almost everybody in Oslob depends, in one way or another, on this attraction, except the whale sharks themselves. So it is no surprise that the local fishermen, after skimming the plankton for almost ten years now, are slowly running out of feed. It is generally misunderstood that whale sharks just feed on plankton and krill, oh no… they also like sardines and other chunks of fish. Seeing whale shark is always incredible and it lays in our nature to be amazed. So for me it was beside the amazement a shocking experience but have a look for yourself.

Impressive and disillusioning! But then I thought that the whale sharks are far better off then all animals in zoos or aquariums. Eventually, they do not have to show up or they could just swim away at any time but I guess it is a little bit like feeding pigeons once a day in a park. Maybe a strange thought but if you visualize the idea is not so far off.

Even though the whale shark business is the main attraction in Oslob there are way more things to discover. Like most of the places, I travel to I did rent a motorbike when I arrived in Cebu. It just allows me to stop at any point of interest and many things can be encountered by slowing down in general. Those encounters got me (once more) in close contact with the kindness, modesty, and contentment with the people of the Philippines. A gift, like an encounter with the whale sharks. Watching the playing kids and their joy of simplicity moved me strongly and put things into perspective. 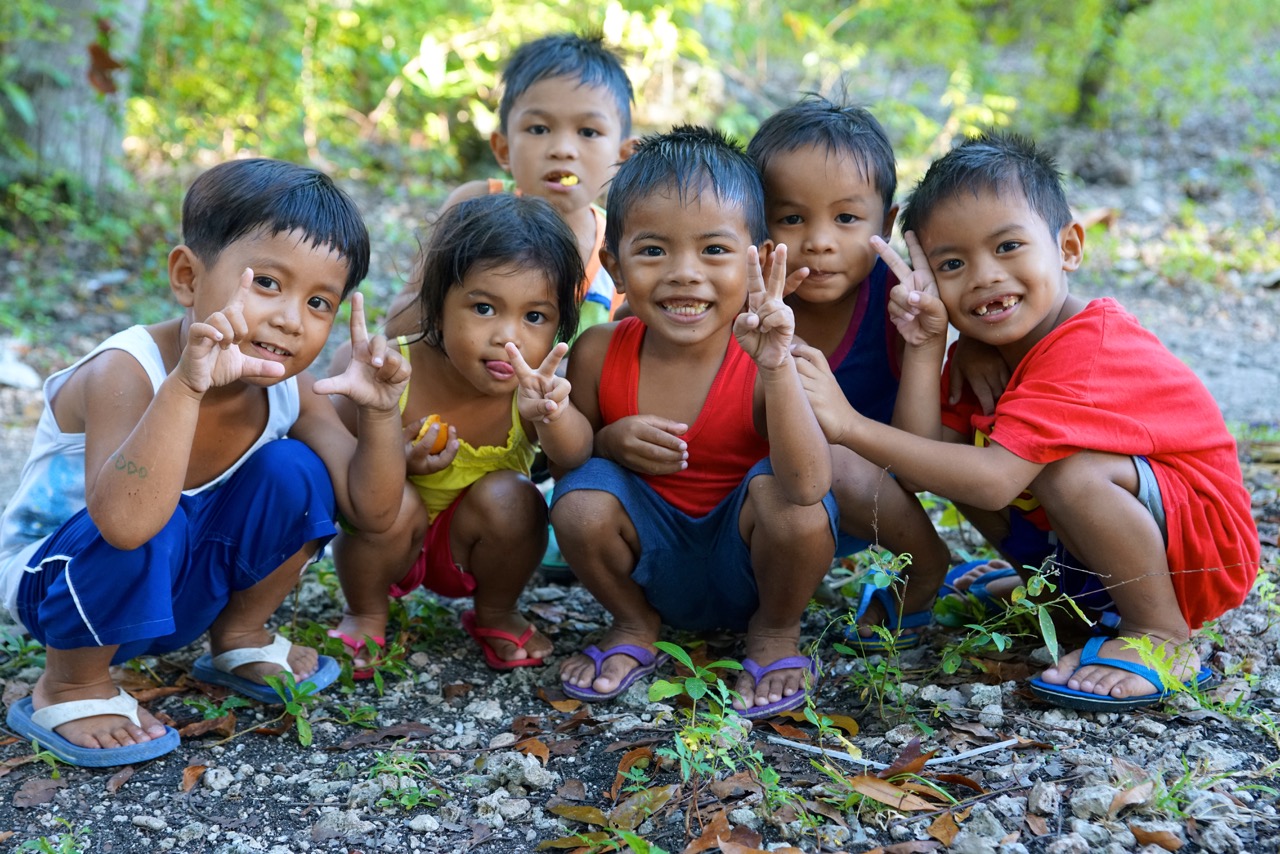 Just 4 km from the center of Oslob the spectacular Tumalog Falls can be found. Surrounded by lush green hills the falls are easy to reach via a paved road and the sight, as well as the swimming, is guaranteed refreshing. The only annoying thing is that many visitors are too lazy to walk for 5 minutes down to the falls and so the hire a guide (which are hanging around there the whole day) to drive them down with a motorbike. A ride which takes about 40 seconds. What a joke! The constant deafening noise of the motorbikes kills the whole atmosphere and beauty of this (once) pristine place.

The island of Cebu with its size of close to 4500 square kilometers has lots to offer for people who like to discover. And like most places, there are certain touristic highlights where almost everybody can be found but for those of you, who are willing to spend some more time and effort, you will be surprised what spectacular places are waiting for your discovery in Cebu. With many beautiful islands, white sand beaches, luxury hotel and resorts, diving locations and heritage sites, high domestic and foreign tourist arrivals have fuelled the tourism industry of Cebu. Cebu consistently gets a big share of tourist arrivals in the Philippines and has become the tourist gateway to Central and Southern Philippines due to its central geographic location, accessibility, and natural resources.

Siargao -Philippines, a paradise and its sweet self-deception

A culture full of divers contrast, deep-rooted between Confucianism and catapulted into consumption. The society of...

Osaka / Japan, part I 99 hours Osaka and… not everything that is pinky and smells like cherry blossoms are...