LUCY and the descendants – Ethiopia, part I 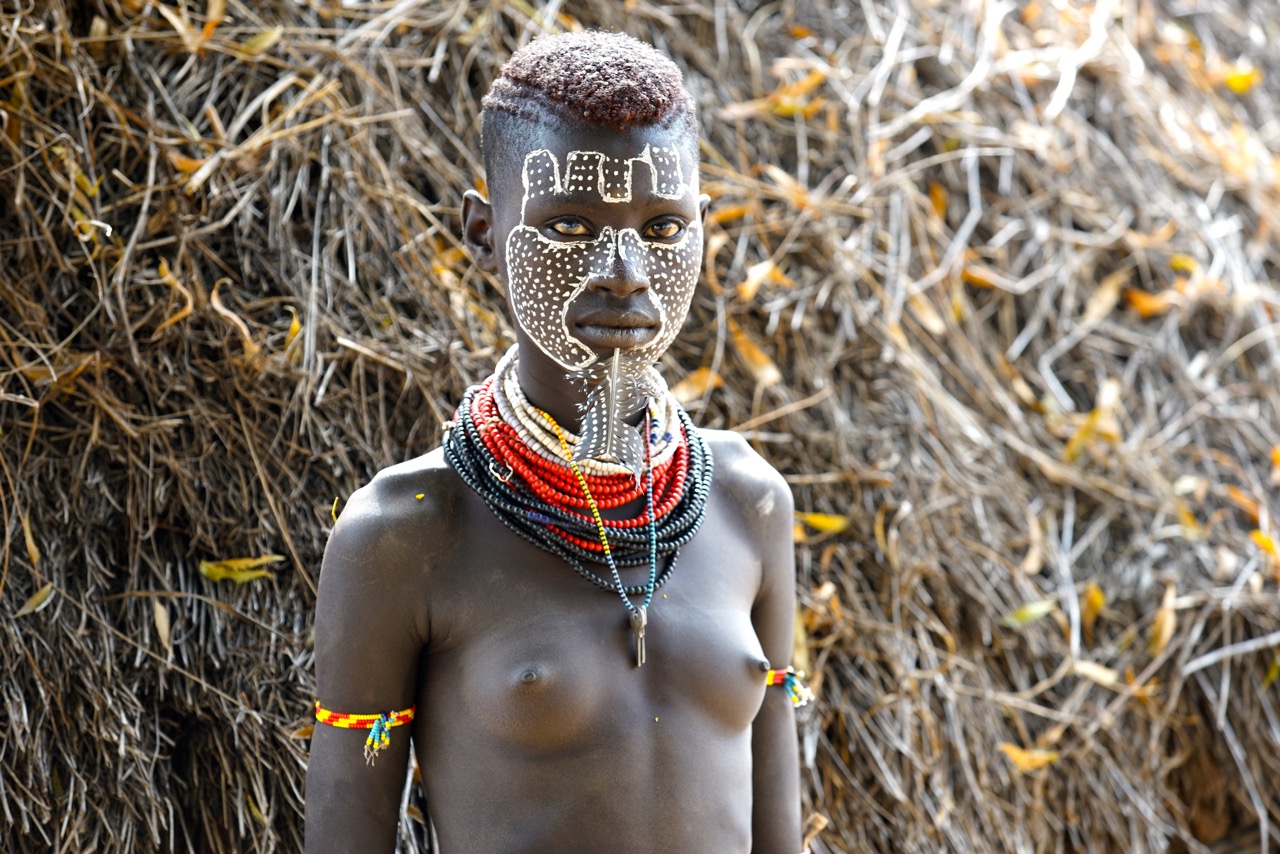 By traveling through Ethiopia you have to expect the unexpected, neither the less I tried to plan and to structure the journey as accurate as possible. Therefore I will display and describe this adventure as happened, providing you, with an authentic process. The title: LUCY of this first (out of two following) blog posts is related to the common name of AL 288-1, several hundred pieces of bone fossils representing 40 percent of the skeleton of a female also known as Dinkinesh, which means “you are marvelous” in the Amharic language. Lucy was discovered in 1974 in Africa, near the village of Hadar. More about: Lucy – Australopithecus

Let me start with a brief overview. Ethiopia has an immense natural, cultural and historical resources. Many argue that the country is the birthplace of humanity. Ethiopia has many different UNESCO world heritage sites and is known for its exciting landscape, ancient religions, and unique alphabet and calendar. There are also more than 80 different ethnicities, with their own distinct culture and language. Ethiopia’s tourism potential is mostly untapped and should be of enormous interest to foreign and local visitors interested in historical, cultural, or eco-tourism expeditions.  Ethiopia has a diversity of wildlife (with many unique, indigenous plant, bird, and mammal species), exotic landscapes, prehistoric sites, and architectural ruins of historical and religious significance.

Currently, tourism and travel contributes only 1.2% to the Gross Domestic Product (GDP) and is planned to reach 9.0% of Ethiopia’s GDP by 2024. Many tourist sites in Ethiopia are completely undeveloped and lack the major facilities such as toilets, shops, drinks and resting areas. The relative lack of infrastructure (hotels, restaurants and tour facilities) is a primary inhibiting factor for the development of the tourism sector. With a high volume of transit passengers transferring through Addis Ababa Bole International Airport to global and regional destinations, there is a need for increased international standard accommodation near the airport.  Additionally, as Ethiopia is the headquarter of the African Union and United Nations Economic Commission for Africa (UNECA), the city of Addis Ababa serves as a frequent venue for international conferences and events. Ethiopian Tourism Organization (ETO) is focused on developing the tourism sector over the next few years. But before we start the trip now, I like to point out several misunderstood topics about Ethiopia which are trivialized in a big way!

Let’s start the journey – The picture below shows you the first part of my tour, fourteen days and about 2200 km. 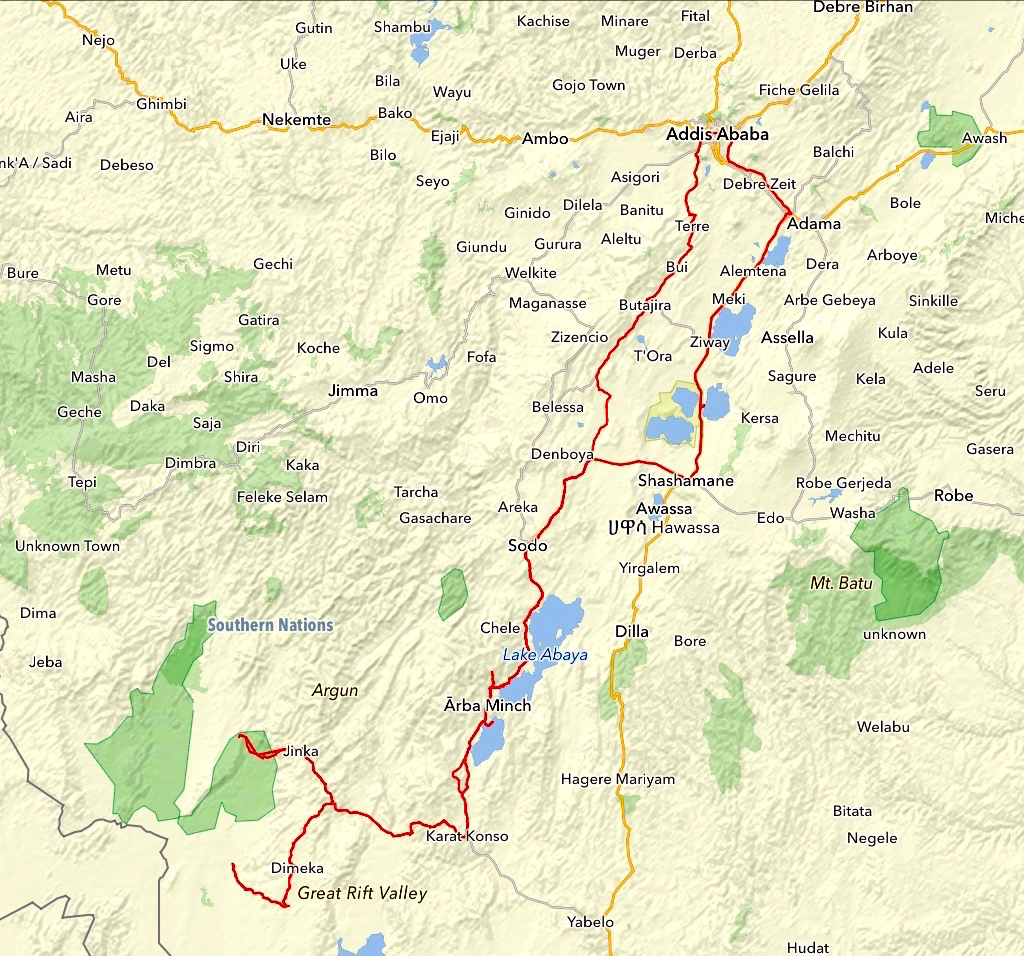 For thousands of years, the Omo Valley in southern Ethiopia was a crossroads for droves of people migrating to new lands. Today, it is undoubtedly one of the unique places on earth because of the sheer diversity of tribal groups that live in this remote area of the Great Rift Valley. For a long time, I wished to be part of this extraordinary opportunity to immerse in the fabric of some of these societies, including the Mursi, Hamer and Karo tribes, each with their distinct culture. By doing this I knew I had to expect a real adventure with basic conditions. The Omo Valley is an incredible reminder of an Africa that has not yet seen (much) modernization. Addis Ababa lies at an elevation of 2,200 meters; the population is about 3,5 million. The city itself is a universe of its own, and after exploring some parts, I went to the suburbs (big laugh) to dive into the local lifestyle and food tasting.

Beforehand, a couple of months, I had to organize two different drivers for the distinct locations I wanted to see, making sure (laugh again) everything works out, more or less than planned (even more prominent laugh). From Addis Ababa, we drove to the Omo Valley region and enjoyed a boat trip on Lake Chamo to spot hippos and an array of water birds. For the next days, we moved from village to village, witnessing traditional lifestyles. The Mursi traditions, whose women insert large clay plates in their lower lips, and the Hamer, who scar and paint their bodies in a mark of their culture, are incredibly fascinating. Returning to Addis Ababa, after fourteen days, was a good choice as well as a needed break for a conclusion of this adventures trip. Reflecting on this memorable experiences of (more or less) whole cultures, ceremonies, and astounding natural environments while celebrating an Ethiopian Christmas at the Genna Festival. On the way to lake Chamo. 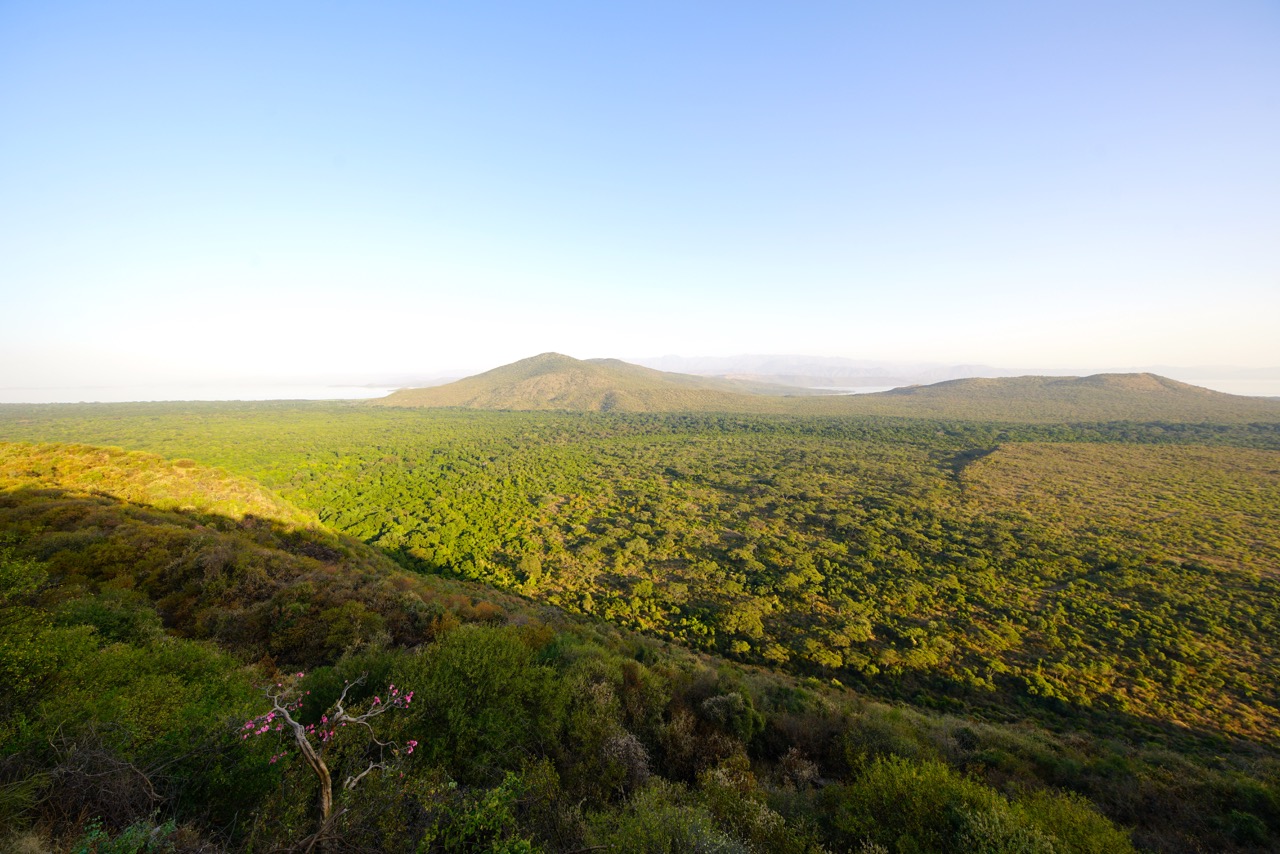 I am sure many things have changed in Ethiopia, but some circumstances haven’t changed at all! While men are not seen, woman do most of the work, and that is, besides to give birth, to collect firewood and walk or stand in line (for hours and hours) to get fresh water.

Drive from Addis to Arbaminch, (450km) via Hossana – The name of Addis Ababa, in Amharic, means “new flower.” Founded in 1886 by Menelik II, it is located at 2,500 meters above sea level in one of the highest parts of the Entoto mountain chain. It enjoys an excellent climate all year round, with an average temperature of 25°C.  Addis Ababa is the third highest capital city in the world, and the altitude may fatigue you quickly so take it easy when you arrive. If you have time in Addis Ababa before/after the trip you can undertake a tour of this fascinating city, and visit the National Museum, take in the city’s tree-lined streets or the bustle of the “Mercato” (market). This colorful market has an array of fascinating goods and curious, providing an excellent place for exploration. Throughout the city, some shops sell typical artisan wares, materials, and antiques. And YES  there is lots of effort regarding changes going on in Ethiopia but as mention (especially in Addis Ababa city) it is a mess in many ways like mismanagement, corruption, and chaotic planning. Sewage, electrical installation, and waste management concepts do exist in a very pure state.

Boat trip on Lake Chamo, drive to Jinka – This morning I enjoy a boat trip on Lake Chamo, one of the best in Ethiopia. There is a chance to spot many hippos and large concentrations of giant crocodiles. Waterbirds abound, and the scenery is truly unforgettable. The lake is about 32km long and provides rich wetland habitat for many species of flora and fauna. In the afternoon we drove to Jinka (250km). 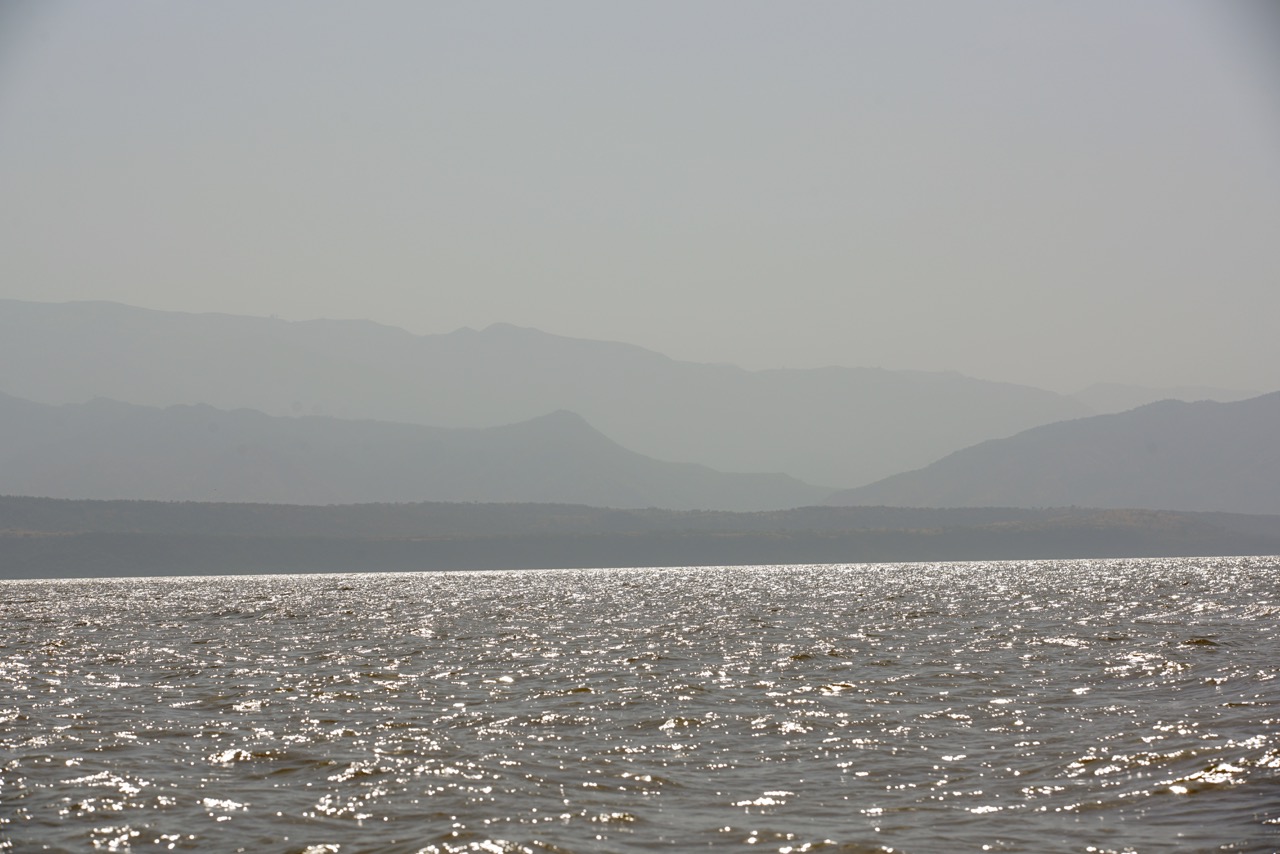 Mursi village visit, Jinka Museum, drive to Turmi – Today my journey began with an excursion to a Mursi village (approx 70km from Jinka). The Mursi are one of the original ethnic groups in Ethiopia. They live in very low huts made of straw leaves and the women like to wear (by tradition !!!) terracotta jewelry on their enormously stretched lower lips and earlobes. The men are famous for their hairstyle. Then I visited the Jinka Museum, which contains the Southern Omo Research Centre’s permanent cultural collection and continuing research of the various ethnic groups and provides an in-depth overview of the people and traditions of the Omo Valley. In the afternoon we drove to Turmi (120km), one of the largest towns in the region. At this point, I like to mention that you have to pay, in one way or the other, for taking pictures while visiting any of the ethnic groups! As you can imagine everybody is asking for money and meanwhile it is very annoying! I tried to use this as my last option and most of the time I was able to trade, food for pictures, which (at least) gave me a better feeling. 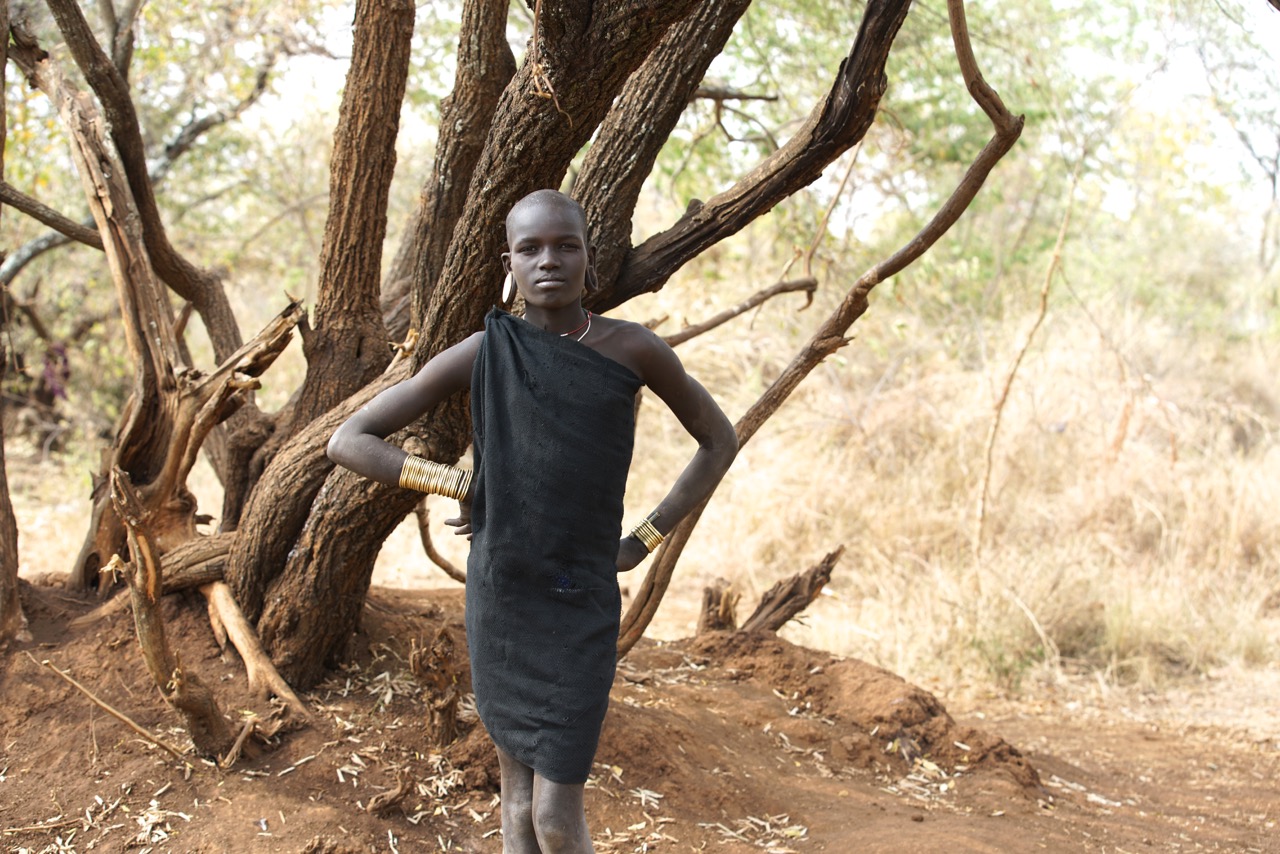 The Mursi tribe are an African tribe from the isolated Omo Valley in Southern Ethiopia near the border with Sudan. There are an estimated 10,000 members of this beautiful, sedentary tribe, whose lip plated faceplate decorations are a source of endless fascination. Long may they, and their wonderful culture live on. 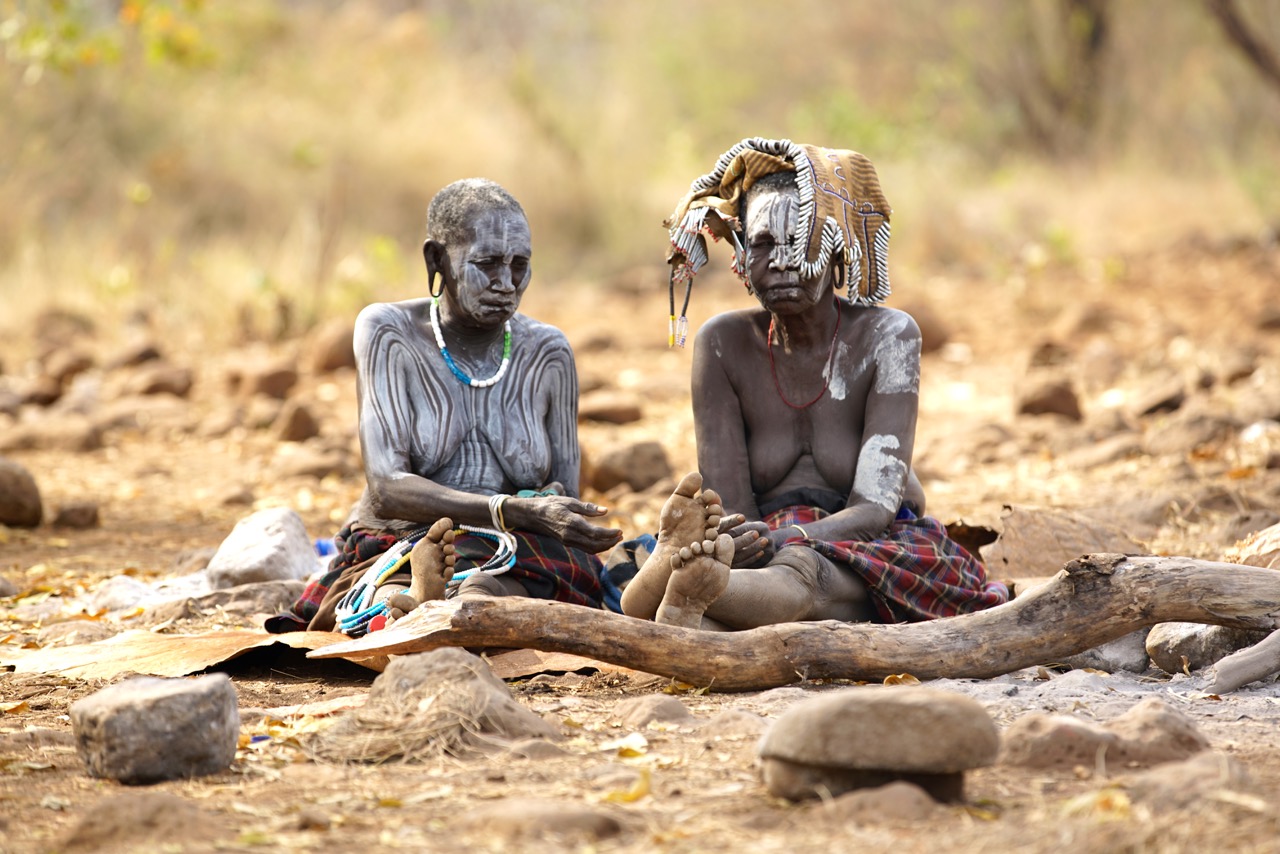 Their trademark ‘saucer’ lip plate (dhebi a tugoin) has become the chief visible distinguishing characteristic of the Mursi and made them a prime attraction for tourists. A girl’s lower lip is cut, by her mother or by another woman of her settlement, when she reaches the age of 15 or 16. The cut is held open by a wooden plug until the wound heals. It appears to be up to the individual girl to decide how far to stretch the lip, by inserting progressively larger plugs over a period of several months. Some, but by no means all, girls persevere until their lips can take plates of 12centimeterss or more in diameter. 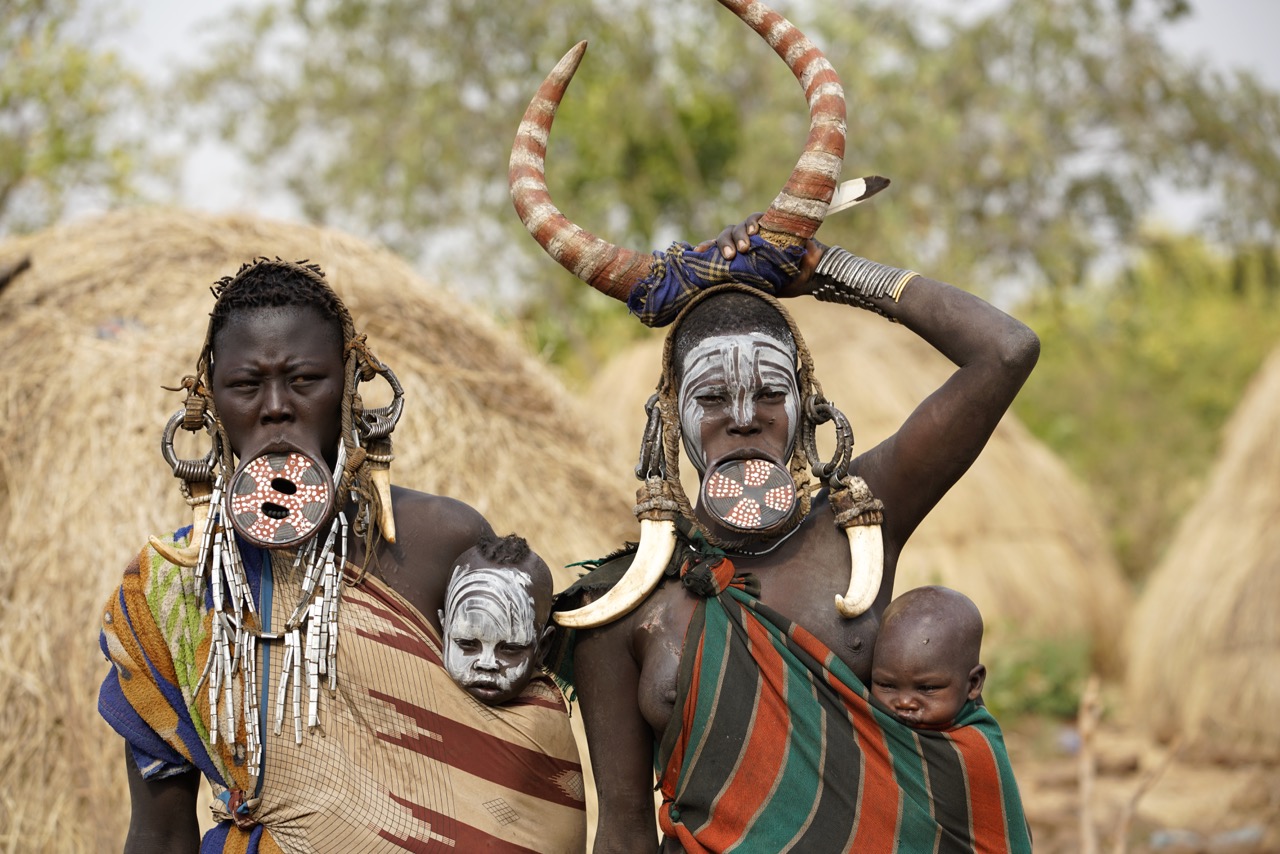 Like other forms of body decoration and alteration found the world over (like ear piercing, tattooing etc.), the lip plate worn by Mursi women is best seen as an expression of social adulthood and reproductive potential. It is a kind of ‘bridge’ between the individual and society – between the biological ‘self’ and the social ‘self’. 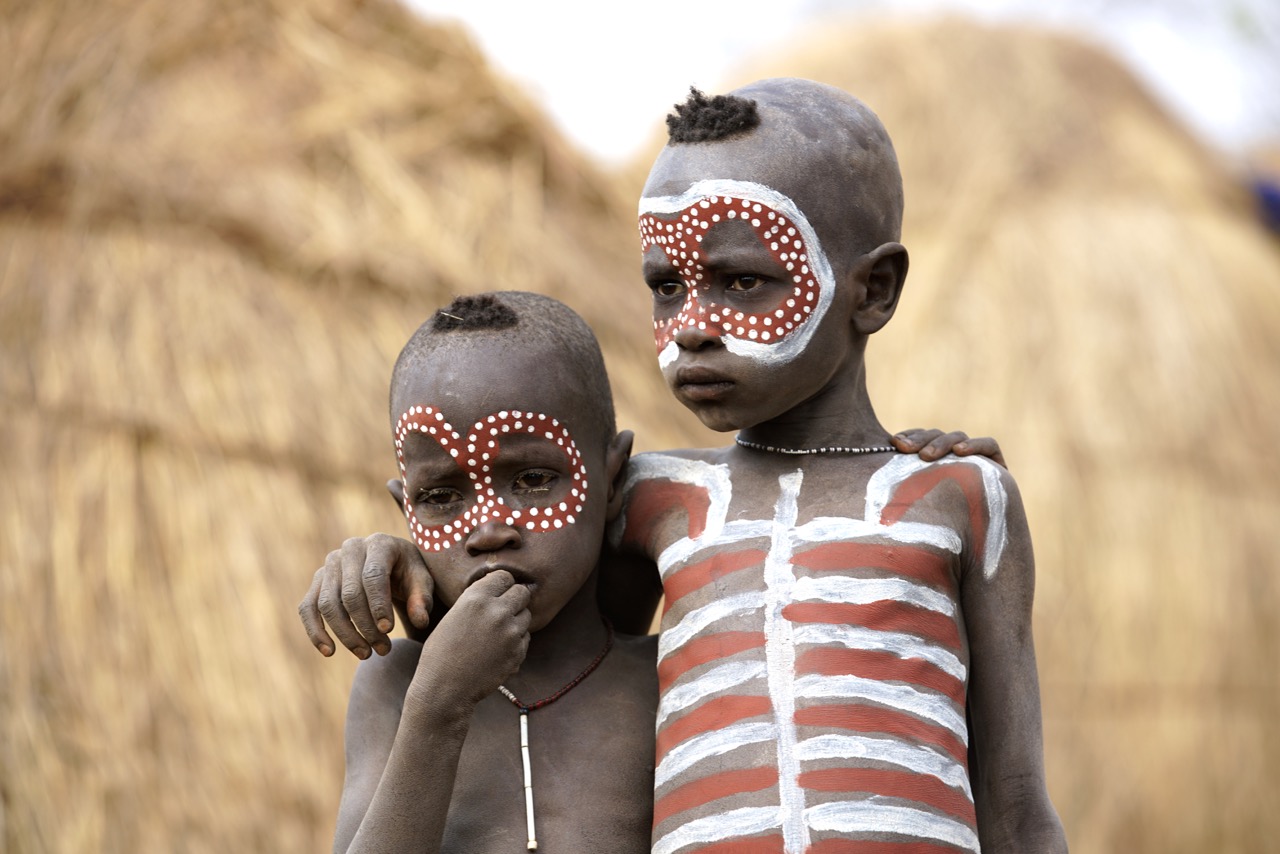 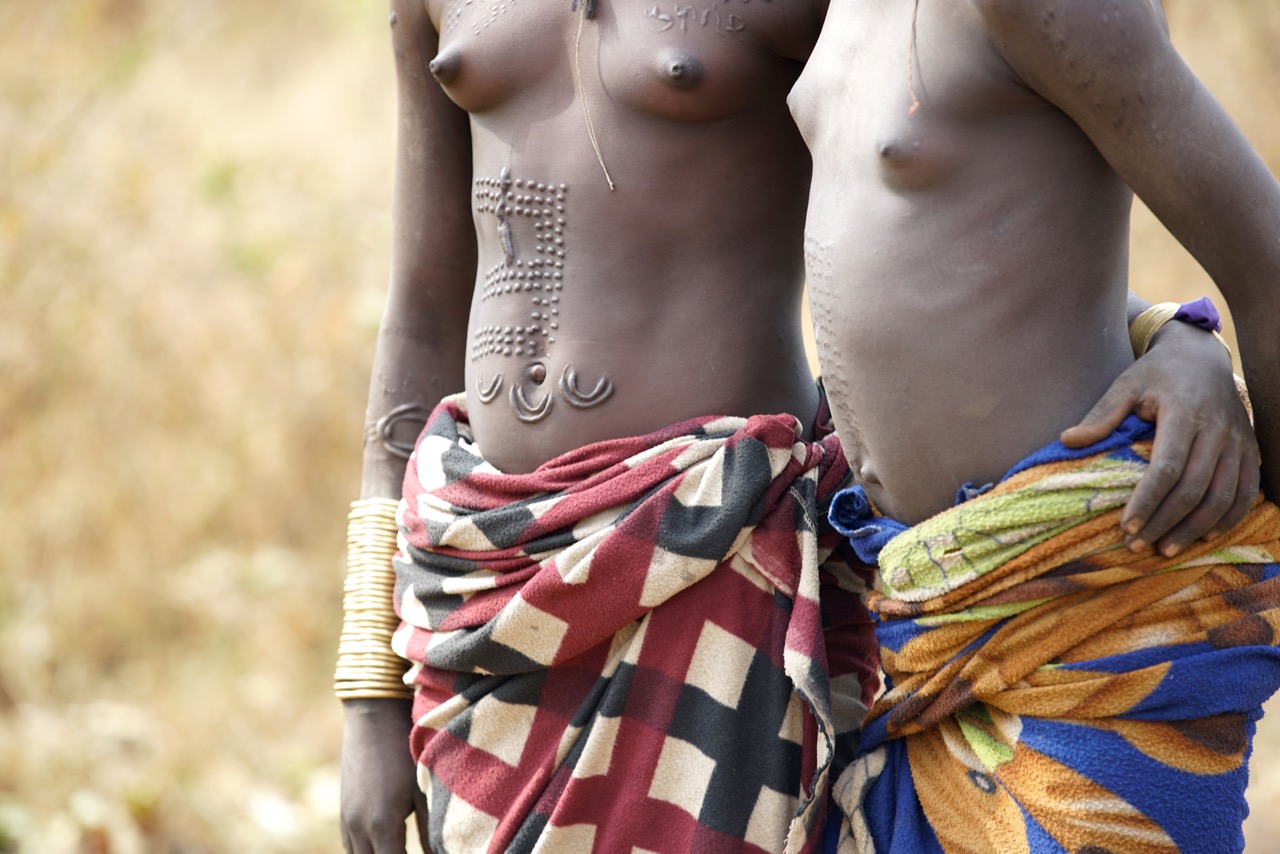 Self-mutilation and circumcision are still carried out in Ethiopia, and the following picture will give you an idea of how common circumcision is spread in Africa! 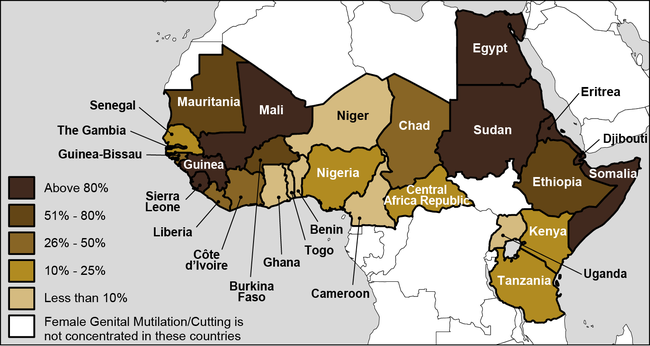 Country information: Ethiopia, the ‘Horn of Africa,’ is situated north of the Equator in north‑eastern Africa. Long known as Abyssinia, it stands between the cultures of the Mediterranean and the tribal people of Africa and boasts the origins of humankind. Ethiopia is one of the largest countries in Africa in both area and population, with an area of 1,235,000 square kilometers it is around twice the size of Kenya or France. The population is approximately 82 million – with the densest population in the fertile central highlands. Much of Ethiopia is still wild and fosters a naivety and freeness of spirit. It has been able to keep its sharp, independent character and not be marred by the ways of the colonists, still retaining ancient cultures untainted by western influences. It is this uniqueness that gives Ethiopia such a magnetic appeal. Its people have incredible resilience and show real pride in their culture and civilization which is apparent in their many colorful celebrations. Nearly 90% of all Ethiopians are engaged in farming and cattle‑raising and live in the countryside. The peripheral inhabitants of Ethiopia lead a nomadic and pastoral way of life, whereas the central highlands support farming communities. The Christian highland peoples have followed a biblical, moral and civil code of behavior for over 16 centuries. To experience Ethiopia’s rural culture and traditions as well as the diversity of this remote land with its incredible people is a memorable adventures experience.

Suggestion: If you travel to Ethiopia to visit some of the ethnic groups with the intention to take photographs, keep in mind that you have to pay for the pictures taken. Maybe you consider swooping pictures for groceries as I did, even it did not work out everywhere, but on many occasions it did! Bringing gifts for the kids is of course very compelling, and so I brought 50 small containers with soap bubbles and many coloring pencils. I need to point out the fact, to prevent disappointment, that in many places the coloring pencils cause a big question mark since most of the kids have never seen paper!

As mentioned after publishing the first blog post about Ethiopia I’ like to invite you to continue this...