What beauty, what a pity.

The only thing in Tibet that’s greater than its mountains, culture, religion and the smile of its people is the prevalent feeling of hopelessness. This despondency has covered the country for decades like persistent fog because no international organization or single state is petitioning actively for change. Depending on where you go to Tibet, the Chinese influence and their all-changing presence can be felt to a greater or lesser degree, but it is omnipresent.

That route is a comfortable two-day climb, but not in every season, which was the reason why we had planned our ascent for early in the year: we had a visa for Tibet, but no permission to climb Gurla Mandate (7728 m). But if you are in the region in April, all roads from Lhasa to Kailash are drowned in the snow, which meant unrestricted movement because there would be no Chinese controls. In no time we crossed the pass and entered Tibet.

But if you are in April in this area the streets from Lahasa towards mount Kailash are still covered in snow and that means, that you can move around freely (like us with the skies) and you do not have to fear to be stopped by Chinese patrol. That’s why we hiked and ski toured over the mountain pass.

In Hilsa we transferred the expedition gear onto the good-natured, faithful yak. We also had a female yak (Bri) to supply us with fresh milk. We made good headway with the Sherpas and animals, and there was less snow than anticipated.

We had reached the small village Hilsa, situated at the border between Nepal and Tibet. From there we sent our liaison over the bridge to talk to the Chinese border control at the end of the world. They were completely outraged that we wanted to enter the country so soon and much too early according to our visa.

It took two whole days until they caved in and allowed us, with many a head shake, to cross the bridge to Tibet. Of course, all our equipment was examined in great detail to make sure that no original Tibetan flag or picture of the Dalai Lama was hidden in it. Due to the exceptionally small amount of snow for the season, our liaison managed to contact our drivers in Tibet, who was to pick us up at the impressive lakes Manasarovar and Rakshastal.

Things worked out for once: after a week’s hiking from Hilsa, the two cars were waiting for us in Tibet. They were an all-terrain vehicle and a big truck, which held not only our equipment but also food and a few barrels of petrol. A good mix!

At the start of April, nights were often so cold that we had to light fires under the car’s bonnets. With yak dung as fuel, they were smelly, smoky and strange, but effective.

The Kora, which circles around Kailash, was a very special experience for us. Three days we walked in awe around the holiest mountain of Buddhists. Only on day one did we meet Tibetan pilgrims, who circumambulate the mountain the traditional way (kneel, pray, walk one and a half steps, kneel, etc.). Due to the snow they had erected a camp, while we went ahead and had the whole of Kailash to ourselves, what indescribably joy. Video: Kailash Kora

This “Throne of Gods” is 6714 m high and worshipped by the old Tibetan Bön religion, the Jains, as well as Hindus and Buddhists. For the 53 km circumambulation (Kora), you should calculate three days, and the highest point, the Dölma La (5660 m), is difficult to reach.

Now that we were well acclimatized, we traveled to the foot of the mountain: Naimona’nyi or Gurla Mandata. At 7728 m and close to the Kailash, he had long fascinated  Toni and me. We had no permission for this mountain, but since most connecting roads or paths were still too covered in snow for Chinese patrols, we risked some scouting with a view to climbing it. The climbing history of Gurla Mandata is inseparable from Herbert Tichy, who had been forced to give up at 7200 m due to inadequate equipment.

Well … to make a long story short, we suffered the same fate. Even though we had excellent gear, the few really difficult passages, the scarps, were completely covered in ice at this time of year. In 1905, T.G.Longstaff made the first documented effort at climbing the mountain, yet it took until 1985 until a Chinese-Japanese rope team managed to reach its peak! Even in 2006, there was little usable information regarding the ascent of Gurla Mandate, so we attempted it at our own discretion at the western flank. The ceaseless storms, the iced-over scarps and the small team were too many challenges for Toni and me though, and we shared this wonderful experience at 7200 m and in memory of Herbert Tichy.

After our dream had reduced (a little), we could continue on our journey to Lhasa at our own pace via truck. Crouching on the floor next to petrol, expedition gear and provisions, we were shaken through thoroughly by the truck for many days.

Welcome to Disneyland or Tashi Delek Lhasa. Already in 2002 during my first journey to Tibet, Lhasa had been run and guarded by Chinese patrols. The city had literally buried its roots (if you look at the paved-to-death place in front of the Potala palace). Buddhist faith has long been suppressed but is allowed in a controlled measure, because it’s profitable.

Namtso Lake 4718 m. The vastness and quiet of Namtso Lake are moving and unbelievably beautiful. From here you can also see the pass of Guring La (5890 m), the last pass which Heinrich Harrer and Peter Aufschnaiter crossed after more than 2000 km on foot through Tibet, reaching the “forbidden town” Lhasa on 15 January 1946.

All guts, no glory … this time; but other times you get lucky, like when we had started our ascent of Nyenchen Tanglha (7162 m) without a permission. During the ascent, we had been asked about permits by the Chinese guide, but since we had just reached a dangerous passage, we could convince him to wait for the (non-existent) documents until after the return to base camp. In the end, the guide and controller departed with his whole crew before our return. 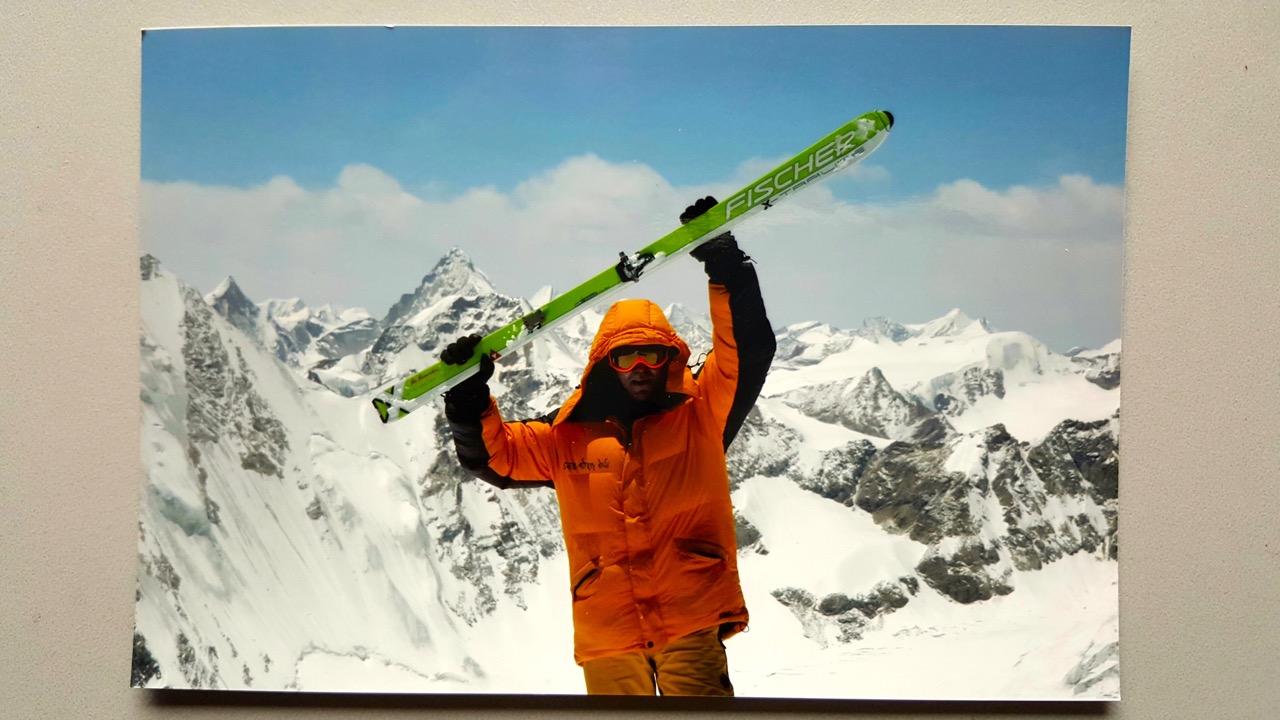