Still wet behind the ears …

BUT wildly determined, the idea to travel the South Nahanni Rivers with my raft took hold of me. It was the year 1993 and … 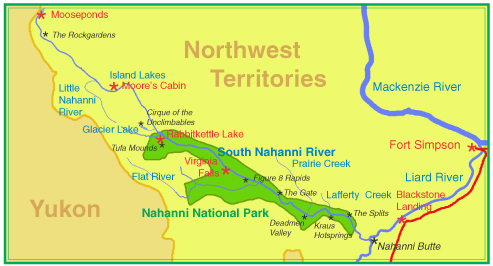 I’d been on Vancouver Island, BC/Canada for months. I earned my keep with my rickshaw, by taxiing around tourists from the harbor to their hotels and then persuading them to hire me for further outings, e.g. a sight-seeing tour of Victoria. I was young, fit, naive, and absolutely certain of my convictions.

At this point, my friend Ron, who had just finished his studies in Austria, got the chance to visit me on the West Coast of Canada. Immediately I started planning and preparing for the trip. Of course, you can organize a tour for yourselves, as we did, but now everything has become overly regulated, making tours rather expensive, but also safer. We had decided to take a small seaplane – for the start of our journey – near Ford Liard to the upper part of the South Nahanni River. The start of our river tour was, therefore, Rabbitkettle Lake and our target a small Dene settlement in Nahanni Butte, at the border of Kluane National Park.

The seaplane landed with a heavy thump on Rabbitkettle Lake and our belongings were quickly unloaded. A short, “see you”, and the pilot took off again, leaving us with the knowledge that we’d be on our own for about a month. Our journey of 400 km would take us 28 days in all, some of which we spent in the mountains. The first night we lay in our tents, exhausted and excited, knowing that there was no settlement within a radius of 350 km – we were surrounded by nothing but nature. The next morning we carried all our gear from the lake to the river and were good to go by the late morning. A gentle current carried us into the middle of the river and we enjoyed that wonderful feeling of weightlessness and uncertainty.

The days rushed by like the river by the land. We wallowed in wonderful impressions, which was a good distraction because the food was tightly rationed and needed to last for at least three weeks. But already, like the true adventurers we were, during the third night, we had to talk about all the delicious things we would eat after our journey. We made good progress on the river although our boat, an Outside by Grabner, wasn’t really the ideal one for the South Nahanni River. Wild water hiking boats like Grabner Outside Boote   are better suited for it.

The rapids, depending on water level and experience, aren’t too difficult to navigate (no guarantees), and we enjoyed simply floating on the current. Those sectons we found more difficult we first inspected from the shore, which led us to explore the surrounding woods and mountains as well. With the roar of the water getting ever louder we knew, Virginia Falls, couldn’t be far off, so we went ashore to get a good impression of the upcoming portage. Portages are places along a waterway at which canoes and other boats are carried overland to avoid obstacles like rapids, waterfalls, depths or fallen trees.

Of course, it was heavy labor but after three hours we had walked the path twice and carried the equipment as well as the boat around the waterfalls. Apart from the massive 96m high Virginia Falls (note, that is twice as high as Niagara Falls), another spectacular sight is the hot springs (which we nearly overlooked), as well as four canyons with walls up to 1200 m high.

After that much water, a detour into the mountains was a welcome change. We chose Sunblood Mountain (appr. 8 km one way) as well as the Tlogotsho Plateau, which isn’t high above but rather difficult to reach from South Nahanni River. If I remember correctly, we already started swearing 10 min into the hike about the condition of the path (of course it wasn’t actually a path) and didn’t stop for the next two days. Dense undergrowth, numerous crossing streams and Grizzly Bear tracks.

We chased away our fears by singing loudly and keeping sufficient distance to one another and kept struggling towards the plateau. Finally, we had to put up our tent just before reaching the summit because we were completely exhausted and a violent storm had broken. Tired, dejected, hungry and annoyed about the slow progress, we still fell asleep quickly. The morning brought us glorious weather and turned the final stage of this trip into pleasure with spectacular views. We spent another day on Tlogotsho Plateau and decided on an alternative route back, thinking it couldn’t possibly be worse. Oh.. how wrong we were.

It wasn’t the ridiculous distance of 14 km that made for heavier going than the days before, but the impassibility (a word one seldom uses). Fallen trees and the crossing of countless streams prevented us from walking more than a few meters before having to climb some obstacle again. Finally, late in the afternoon of our third day, we reached the river again, where its impassibility (again) made us wade directly through the water to the bushes where we had hidden our boat.

After more than three weeks together on the river, Ron and I were of course already tired of each other, but one of us sitting in the front and the other in the back of the raft was all the distance we could possibly put between us. In the morning of day 28, we reached Nahanni Butte safely, happily, and starving. As usual, it’s the countless small little details which still make us laugh to this day when talking about this trip.

Unfortunately, the cost for such a journey has exploded and depended on the tour offered, you have to pay up to 6500 USD per person for such an adventure. Ridiculous!

Still, here is one recommendation: NAHANNI CANOEING TRIP More photos from the archive from 1993 / Alaska.

Well, it’s never too late for a happy childhood!

Being here in Penang feels like… another life, no wonder because my last visit lays back 36 years ago when my...