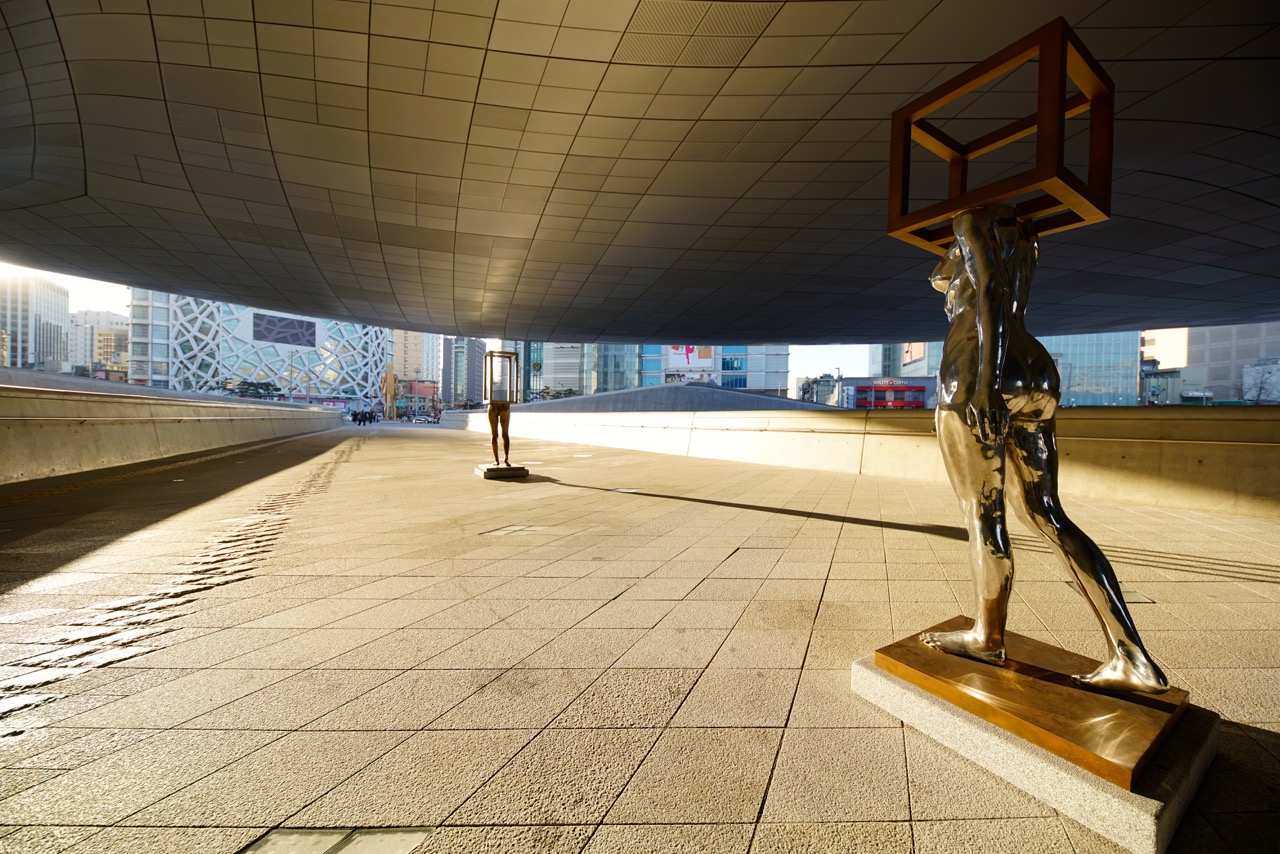 A culture full of divers contrast, deep-rooted between Confucianism and catapulted into consumption. The society of South Korea is not just quite confused right now but also on the search for a new identity. The tailor-made youth is sliding through this implanted narcism doctrine into a very uncertain future.

My knowledge about Seoul and South Korea in general (to bring it to the point) was miserable but my curiosity big and so I used my journey towards Seoul to satisfy my needs by reading and researching about it. When the massive Airbus 380 with 682 passengers finally landed, almost silken, at Incheon Airport in Seoul it was about time to experience the different opinions myself. The airport itself pulsates like a giant octopus organism and brings more than 50 million passengers per year to South Korea. The entry was easy, fast and as expected smoothly to fulfill the typical cliche of the South Korean patience and devotion.

The flight time from Vienna to Seoul was, with one stopover in Dubai, 13 hours and the long journey had an end (or just started). It was great to move around and I went straight to the tourist information, changed some money and asked around to find bus 6002 because its destination is downtown Seoul which is reached in 70 minutes from the airport. It was the gesture of the bus driver, who bow down in front of his guest, before taking off to downtown. This gesture of respect generally impressed and reminded me of the very first step of my trip that I will be traveling through country’s stamped by socio-cultural collectivism. I knew that but after experiencing it for several weeks I was surprised who deeply rooted that is and how it’s affecting every single activity.

Seoul’s population in 2015 was a bit more than 10 million people and its population density is almost double compared to New York City. Seoul is the center of the Sudogwon region where about 25,5 million people are living. Which means that half of South Koreas population is leaving in Seoul and other satellite towns around it. Sudogwon is one of the fifth biggest metropolitan areas worldwide and the fourth biggest economic zones.

Besides being the capital city of South Korea Seoul has the status of hosting all the important sectors like finance-, culture-, and being the educational center. The City held the winter Olympics in 1980 and was the venue for the world championship in soccer in 2002. As usual for my trips, I did book an Airbnb accommodation in advance which was located close to Hongik University in Hongdae and just 15 minutes walk to line 2 subway station. The hosts ‚Momo & Pool‘ are doing a really great job, at my time staying there. The pool was the one who gave me all the needed information, hints and maps and price to quality is really good. The rooms are basic but provide you with all you need, the atmosphere, the quiet neighborhood and the location makes it worthwhile. They named it Pajama party Guesthouse and it started as a cooperation within the neighborhood of the area. The guesthouse Pool’s and Momo’s Guesthouse has floor heating system, toilet and shower in the room, free WIFI and includes a simple breakfast.

The size of the city is really huge and I love to do my discovery manly by food but not in this town. The network of the bus and subway system takes you everywhere, it is quite easy to understand and punctual. Of course, it takes some time to understand the system (like everywhere else in the world) but as soon as you know how it works you can start exploring the city by your own interests. The best is to get yourself a so-called ’Tmoney’ card which you get in all subway stations. It’s a cash for credit card and whenever you use a subway or bus you just place it on the entrance gates and it automatically subtracts the amount.

You can recharge it when your credit is getting low. Signs at the Subway stations are always written in Korean, Chinese and English but the best about the subway is still to come. All subway station and other major traffic junctions and public places offer free WIFI and clean toilets, free of charge! That is what i call a clear statement for the public. This fact i like to mention especially because it is such a stupidity not to provide it in so many countries, like my own. I see this as a general requirement the public should claim for. Let us go back to the subway issue and here you can find the most important information about it.   Subway System Seoul 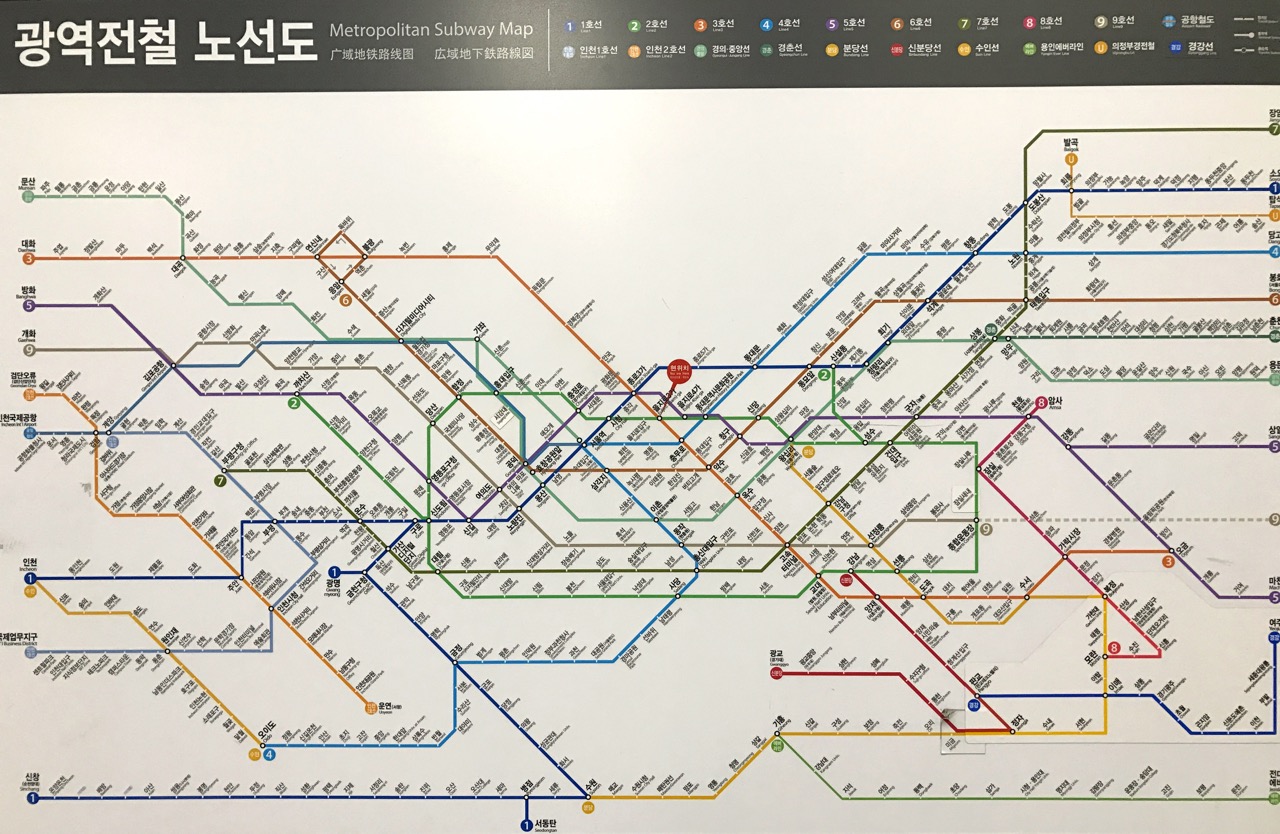 A good alternative if you wont to relax a bit more while getting to your place of interest is taking a taxi and in comparison, it is way cheaper than in other highly developed countries. Starting price is 300 KRW South Korean Won = 2.38.- Euro (January 2017). You could say that a 20-minute ride costs you about 8.- Euro and you cover a lot of distance in that time. The amount of youth which is moving around in the subway system is ridiculous and you do not see anybody without a mobile phone, that is almost impossible but no wonder with Samsung as the biggest South Korean employer with provides 490.000 jobs. Hyundai is not far behind and also a reason for the low unemployment of 3,6 % in 2016 of all OECD members.

As mentioned the mobile phone is omnipresent and besides, there is going out for eating and drinking as well as shopping. The youth (the once under 25 years of age) is focused on those few priorities although the once over 30 years are (right now) daily on the streets to demonstrate. The reason is the political scandal from autumn 2016 caused by the South Korean Präsident Park Geun Hye. As far as domestic policy is concerned this is a very unusual situation for the country and their people.

Seoul street life is the place to be if you really want to dive into a true cultural experience. Nowhere else you can feel the diversity of past and presence and tradition and awakening better than on the streets.

Seoul, of course, has lots of interesting sights and all of them easy to reach by the public transport system. For those of you who like to get up early Seoul’s fish market is a must-see but if you show up at 6 am you rather stay in bed! The fish auctions are all between 04.30 and 06.00 am.  Fishmarket Seoul

Right now you still find some great and old handicraft workshops and artist’s quarter but roomers are out that those old quarters have to move (like most places) for modern new buildings.

If you drift a few days trough Seoul you feel, despite the dimension and a population exceeding 10 million, extremely safe. Why is that? South Koreas gun low and the maintenance of public order are some of the answers to that. The Nuembo report quoted South Korea with 85,69 points out of 117 country’s with the highest safety index for 2016 which tops even Singapore:  Security Index Report / german

This safety feeling I can certainly confirm and it widespread’s (subliminally or consciously)  the pleasure to discover more and travel around even late at night. Seoul at night has a very special flair and charm and the fact that the shops and restaurants are usually open till midnight makes it even more convenient to stroll around late and to take another fantastic midnight snack. 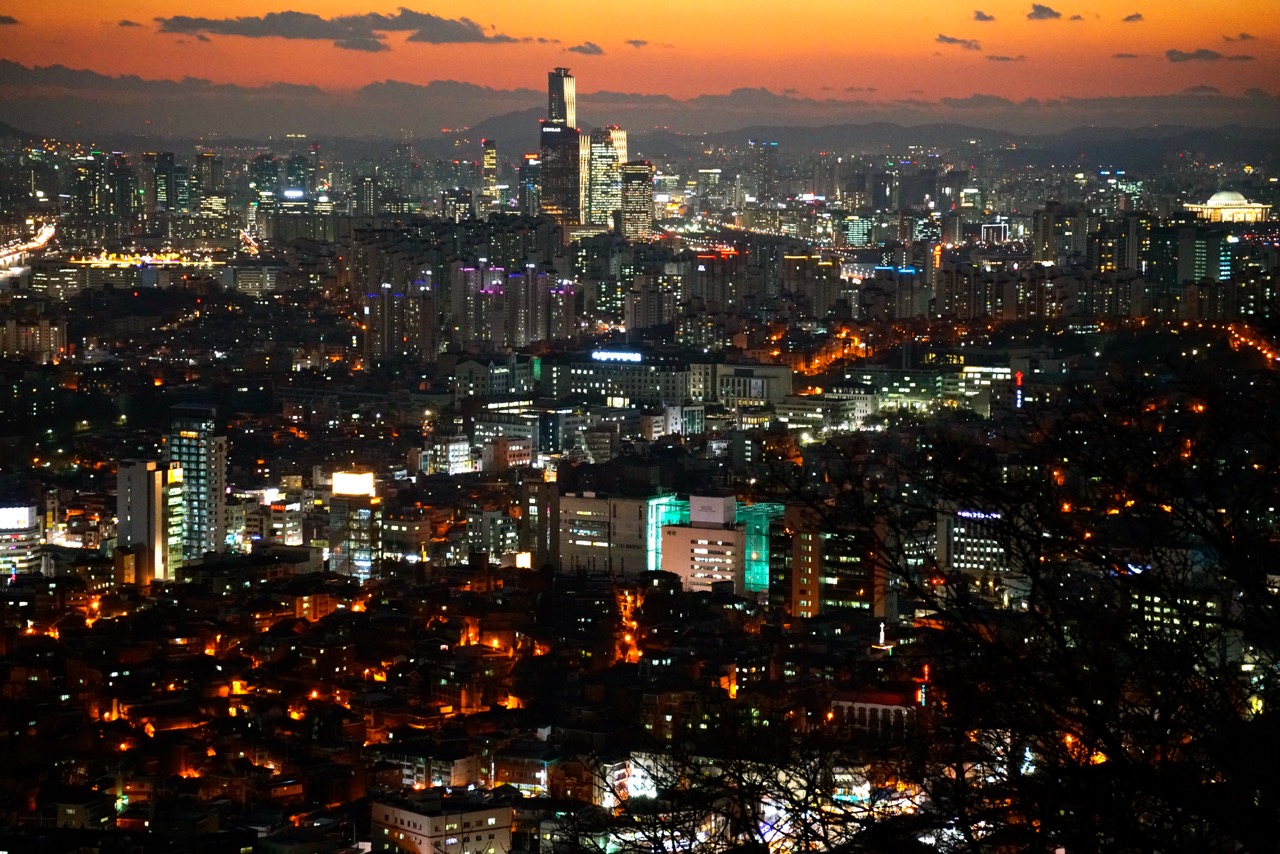 The locals seem to have no stress even though they have to follow there jobs and routines but all trust in the existing regime. This is very interesting for me to observe how relaxed millions of people are drifting through town, the subway systems without being apathetic.

The incredible diversity of food and South Koreas dishes are a world by itself. Even you (I) cannot read a word of the menus in the restaurants you just have to point your finger to one of the graphic characters and you never will be disappointed. The colorful markets with the steam, the different smells and the huge variety of vegetables, fish etc. is a must for your senses (and stomach).

I was in Seoul in January 2017 and I needed those 7 days to see part of the sights and the winter months with an average temperature of minus 8 degrees still makes it fine to move around without having to freeze, but winter has the big advantage of fewer tourists. Here you find now recommendations which are easy to reach by public transport and which also gives you good impressions on the history and culture of South Korea.

For those of you who are interested in architecture check out the Dongdaemun Design Plaza by Zaha Hadid and Samoo Architects from Seoul.  ddp Design Center bei Zaha Hadid

A close and nice recreation park to hike and even for rock climbing is the following: Bukhansan_National_Park great and close to the city. Good for hiking and rock climbing

The 5 things you rarely see in Seoul during your visit

If you think the ice age is confined to the poles (or ice cream parlors), you’re wrong! Here’s an...